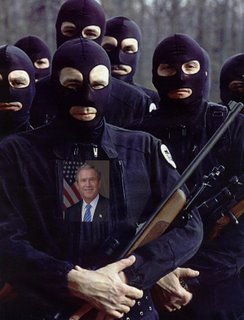 The Republican National Committee released a new video Friday in an effort to combat the negative press surrounding Sen. Russ Feingold's call for censure of President Bush, a measure whose Senate debate began today. The slick piece, a Karl Rove Joint produced in association with GOP Propaganda Films, is titled "Censure? Impeachment? Is this the Democrats' Plan?" It opens with images of presumably Arab terrorists shooting at nothing in particular and blowing up an unidentifiable object. The cheesy footage resembles a high-tech video game.

Bush has been on the hotseat over his authorization of illegal, warrantless wiretappings by the National Security Agency in the days following 9/11 and continuing to the present. The video is part of an email promotion sent out by RNC chair Ken Mehlman, which directs the recipient to the RNC's website.

"On September 11, Terrorists Declared War on Our Country," the video continues. "Today, the Terrorists Still Fight That War." Ok Ken, we kind of expected this sort of rhetoric from you. You've become so predictable we can almost recite your drivel before you do. Mehlman next gives us some good old fashioned patriotic (I almost wrote idiotic) footage of our fearless leader reaffirming his post-9/11 promise to protect America from this new enemy. "This nation will not wait to be attacked again" (yawn). We then see clips of Feingold, Al Gore and Sens. Harry Reid (NV) and Dick Durbin (IL) all basically saying they'd censure and/or impeach the hell out of Bush for his criminal behavior if given the chance. The video closes with "The President is Taking the Necessary Steps to Keep America Safe. Who Do You Stand With?" (another yawn). And throughout the video on the right side of the screen the RNC urges viewers to "Sign The Petition and Tell Democrats to Stop Weakening Our National Security."

Shame on you Mehlman. This sort of incendiary rhetoric is both irresponsible and reprehensible. Is it really necessary for Bush to break the FISA laws in order to defend America? Is the threat we face so grave and so immediate that Bush must circumvent the FISA court and Congress in order to monitor terrorist activity? Is the special FISA court, which can approve urgent warrant requests within an hour, not responsive enough for the Busheviks? And because Democrats don't condone law-breaking by Bush, that means they're weakening national security? This video is a stretch even for you, Kenny-boy.

The bottom-line? Bush broke the law, plain and simple. And Feingold's censure measure deserves passage. The current Republican-controlled Congress needs to know that history will be the ultimate judge of whether it best served America's interests or merely served to protect, aid and abet a criminal president.
Posted by The Ostroy Report at 8:52 PM

I spent the day curled up on the couch with a fuzzy blanket watching the censure motion hearings on cspan. Leahy, Feingold, Bruce Fein and John Dean did a dandy job presenting the evidence and justification for at least censure. Those mouth breathers (Who elects these guys???) Jeff Sessions and Orrin Hatch just spouted Mehlman party line. It was disgusting and pathetic. Lindsay Graham and Arlen Spector tried to pretend fairness but they too had their minds and their GOP money made up. There will be no censure. It won't make it to the floor for debate or a vote. Unless we take back the congress, we're toast. I have to admit I was highly impressed with John Dean. He seems to be at the forefront of saving the presidency whenever it is required. I wish he had as much power this go round as he did during the Nixon era.

Propoganda 101 is all this is. This is fear feeding on fear.
Beleive this - we're done for. I mean it. Even if we happen top take back one of the Houses in Nov. - we're cooked.
I'm afraid I'm a pessimist. I beeive the system is so corrupt that it must now conpletely fail before it can be fixed.
That is if any of us survive.

"You're either with us or you're with the terrorists."
-Dubya-

Hey Dubya! I'm not with you, because YOU'RE with the terrorists! OK?

The Bush/Cheney Administration, after numerous credible and adequate warnings, allowed the tragedy of 9/11 to occur so they could start an illegal, imperialistic War OF Terror, and steal Iraqi oil revenues and U.S. tax dollars.

For the life of me I cannot wrap my head around the GOP's support of Bush's warrantless surveillance programme nor why congress cedes their power rendering the house impotent.

I usually do not make comparisons, but if this were to have happened under a democratic presidency would the GOP be as obtuse to the idea of censuring the president?

Of course Rove put the fear of god in any republican citing there would be no funding nor party support for anyone who dare vote against bush.

However what that boils down to is they are ultimately voting against their congressional power by not voting to censure Bush which will affect future members and how this government will be run.

Mehlman and the others are cutting off their noses to spite their faces in the long run. They are emasculating their power; additionally by placing loyalty in a man over the Constitution comes at the expense of the people.

Nothing the republicans do surprises me any longer. And the atrocities Americans put up with, (with little objection) is astounding. John Q. Citizen does not care anymore. The apathy is as apparent as a freight train lumbering down the tracks.

our founding fathers in their wisdom left an escape clause but most don't know about it because they blinked when it was mentioned in civics etc.....THE DECLARATION OF INDEPENDENCE.....READ IT AND FOLLOW THE INSTRUCTIONS.....unless the bushiviks have declared it a classified document meant to enable the terrorists....JUST READ IT CAREFULLY..WHILE YOU STILL CAN

Could the DNC please...PLEASE get their act together long enough to dig up the videotape of Bush's response to a question about the whereabouts of Osama bin Laden, in which he said, "I'm truly not that concerned about him." Splice it repeatedly into the tough talk statements of Rove and Mehlman and the rest of the Kool-Aid drinkers, and close it off with the the question: "Is censure enough?"

Based on the community and the state in which I now live, and the national news, I am convinced we are now living in an immoral environment which promotes disregard and disrespect for obeying the law. We're into: "whatever works", "the end justifies the means", "you gotta do what you gotta do." That's why Bush can get away with it; that's why the illegal immigrants can get away with it,and on and on. Many Americans think it's all right to break the law. As a small example, here, where I live, I've been cheated by every workmen I've hired. A long-time resident explalined to me that one of this town's firm beliefs is that if you have children you're justified in doing anything you need to do to provide for them. She and those for whom she spoke who cheated me are all pious church members. They have a higher law than that of our country - it's "what I need/want I'm entitled to despite the law of the land."

This is very interesting, since it connects the Bush's illegal act to the war in Iraq and wherever those images were taken.

The problem is not Bush, but the Democratcs who need to search for the balls and grow some backbones to stand up and say what the majority of Americans and the was majority of the people of the world are saying, ENOUGH IS ENOUGH.

This man lives ina dream land, has no understanding of the reality of theworld and with his power, he is destroying the world and US together with it.

If you do not stand up against it, the world will see more and more of scenes like what we see daily in Iraq and we get to the point of no return.

All this censure business is nothing more than an 'impeachment avoidance' ploy. Censure is a slap on the wrist and I doubt that Bush would even be humbled by it, just angry enough to lash out even more than he already does when folks don;t two the party line.

Let's just go whole-hog and vote for impeachment. Get that motherf@#$er out of office.

Then he can go back to his pretend ranch, play with himself while charges are readied to bring him before the Hague. :-)

While I know it won't happen, I'd rather see the word "Impeachment" as an attempt next to Bush in the history books.