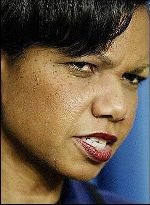 The Bush administration's rationale for invading Iraq has changed more times in the past four years than most thinking people can stomach. It's been everything from WMD to Al Qaeda connections, humanitarian reasons, mass graves and nation-building. On NBC's Meet the Press Sunday, Secretary of State Condoleeza Rice added yet another justification. One can only imagine just how many there'll be by the time Bush leaves office.

With that she was interrupted by Russert with the obvious follow-up, one that's been asked of this administration countless times: "But Saddam was not related to flying airplanes into building..."

"No, and we have never said," Rice began to say (obviously about to lie about the bazillion times she Bush, Cheney and Rumsfeld have made that very connection)..."Saddam was not related to the events of September 11, but if you really believe that the only thing that happened on September 11 is people flew airplanes into buildings, I think you have a very narrow view of what we faced on September 11. We faced the outcome of an ideology of hatred throughout the Middle East that has to be dealt with. Saddam Hussein was a part of that old Middle East. The new Iraq will be a part of a new Middle East, and we will all be safer."

Now we're in Iraq over hatred. Give these bastards credit. They're getting more and more creative.
Posted by The Ostroy Report at 10:53 AM

Man! You're fast! I just saw that on the tube and you already have itup on your blog. Sheesh! Oh, I guess you are in the Eastern time zone but still...good job!
It is disgusting. I remember her sayinr "No one ever imagined people flying airplanes into buildings." This was in defense of the poor administration record of preventing the 9/11 tragedy.
Now she is suing a variation of that tactic as something we need to guard against, so we have to pursue a war in Iraq! ????
What utter nonsense.

I haven't had my coffee yet! Can't type very well!

What a surprise. Ever wonder if the administration has somebody assigned to the job of "rational of the week" who comes up with this stuff? Their plan seems to be to just keep shooting different reasons out at the public, so people will just pick and choose the one they want and agree it was a good reason to go to war.

History is going to eat these people alive.

It occurs to me that Israel was a part of the old Middle East, too. Is Condi suggesting that it would have been helpful if we'd responded to 9/11 by invading Israel?

Brutal dictator, gassed his own people, world is bettter off. Yada, yada, yada...

I cannot understand why, after all of the abuse American citizens have suffered under this administration, that the only organized, passionate, visible, meaningful protest is being made by ILLEGAL IMMIGRANTS DEMANDING THEIR RIGHTS AS ILLEGAL IMMIGRANTS. What has happened to the citizens of American? The strongest among us are citizens of another country.

I saw the news clip of "Kindasleezy"...(thanks to a poster on Think Progress for that appropriate moniker)...and the look on her face was one of a liar. She looked worried like a kid coming in way past curfew. Perhaps she, herself, is having a difficult time drinking the BushCo kool-aid.

I thought she was all over the place. Like when a 10 year old has told too many porkies and is being tripped up by their own lies.

The more she digs herself into this the more she erodes any ounce of credibility she ever had.

she never had credibilty, she is soaked in oil just as much as the rest of this administration. I think that people have a softer view of her because shes a woman, but remeber she was in bed with chevron.

Holy crap... you know as many steps they took to get to Saddam you figure Kevin Bacon is in some deep shit;

He has to be in the mix right?

How come Condi always looks so EVIL? She and Cheney would have some SCARY children. Thank god that probably won't happen. Instead, the world gets dissed by their bs and incompetence to run a world power. What amazes me is that they think the world is dumb enough to buy their lies.