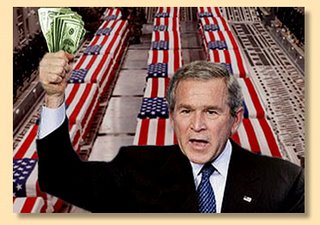 When President Bush said that the new democracy he's creating in Iraq may not resemble the one we have here in the United States, he wasn't kidding. In fact, in Bush's convoluted world of political delusion, he serves not only as the high exalted King of America, but the supreme mullah of Iraq as well. How else do you explain his brazen demand of the Shiite leadership that they remove their interim Prime Minister, Ibrahim al-Jafaari, because he "doesn't want, doesn't support, doesn't accept" the recently nominated candidate. The story was reported Wednesday in the NY Times.

The "personal message from President Bush" was delivered to Abdul-Aziz al-Hakim, head of the Shiite political bloc, by the American ambassador, Zalmay Khalilzad. The Shiite bloc had won a plurality in Iraq's parliamentary election last December. It nominated Mr. Jafaari in February to remain prime minister for four more years.

Now here's the real rub: Bush's 3-year-old debacle in Iraq has cost $350 billion, the lives of 2300 U.S. soldiers, the lives of 30,000 Iraqi citizens, and has seen 20,000+ soldiers seriously wounded and/or maimed in order to create a "democracy" where Bush, in heretofore unseen levels of arrogance, thinks he can dictate who leads the country. A different kind of democracy indeed.
Posted by The Ostroy Report at 7:36 AM

The only way to stop Bush is to change Congress.

Cathy
From the fast fading State of Michigan