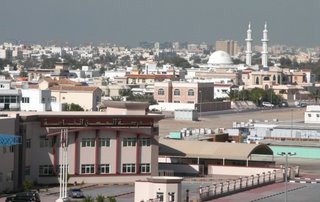 I'd like to extend my personal thanks and words of gratitude to the United Arab Emirates and Dubai Ports World for selling its interest in our waterways. In withdrawing from the deal so as to bolster our national security, the UAE did what our commander-in-chief could not. Yes, our self-anointed Darth Vader in the war on terror, in his infinite wisdom, had decided that an Arab nation with questionable ties to Al Qaeda, drug-traffickers and money-launderers would make a great choice to control operations at six major U.S. ports. But despite mounting pressure and threats from his own party leaders to kill the transaction, Bush refused to budge. But fortunately the UAE ultimately said, 'hey, even we think this is a kooky deal!' Thank goodness the UAE had the sense to figure out how to best tackle one of America's problems. Perhaps they'd like to take a stab at the economy, the Katrina mess and corruption in Washington?
Posted by The Ostroy Report at 7:05 AM

Isn't it also possible that this might
be one of Rove's planned tricks to take away attention from the eavesdropping bill
that has now been passed? If so, Rove
was successful, right?

What? No accusation that Bush called behind the scenes to broker their withdrawal? Andy, you are slipping.

Why was the UAE in direct contact with Senator Warner?

This was all a tempest in a teapot to transfer port control to Halliburton. There might be outrage, but at least they are an American Company, right?
C

American only in name. It is a company that keeps it's records in the US where they can be searved with a subpoena to review business records,for the fraud and overbilling that will happen. Unless there is a clause in their agreement allowing them to keep the records offshore. That is if they are actually reviewed and then procecuted and/or made to reimburse the government. If not, it's just a money givaway.

It is not so innocent as it may appear. I'm sure Bush and his gang paid/bought, as he does everything else, to get this deal. So now, the enemy within, Haliburton, can ravage our country. This will all be very expensive to Americans in every way.

Who actually OWNS the ports? Please, if you think this was a "out of the goodness of their hearts" business deal, I'm sure a few Republicans would like your vote.

What will you think when the announcement is made that Halliburton will run them. Does Warner have stock in Halliburton?

The terrorists bank through Dubai becuase it is a major banking centre, not because the UAE supports terrorism.

US ships are made safe and welcome by UAE.

Grow up! Stop indulging in cheap guilt-by-association and racism.

You have more to fear from the Halliburtons & Carlyle's of this world than anything. Consider this:

You might want to look at Wayne Madsen (Jan 23, 26) : The Office of Federal Investigations (OFI), became U.S. Investigations Services (USIS) which was privatized in 1997 and is now owned by Carlyle. Carlyle has unfettered access to millions of government files, including those held by the federal Employee Service and Records Center, and details on contractors who have applied for security clearances.

"After OFI became USIS, the timeliness and quality of the security background checks conducted on Federal employees quickly deteriorated according to former OFI employees. They saw USIS being turned into a cash laundering operation whereby a few officials at the top became instant millionaires. Insiders also report that USIS "branched" into other operations never before conducted by OFI/OPM. These other operations were the focus of Col. Ted Westhusing's investigation when he was "suicided" in Baghdad." (Westhusing was the Iraqi police and security forces trainer).

"Informed sources report that Westhusing was prepared to blow the whistle on fraud involving US Investigations Services (USIS), a Carlyle Group company, when he died. He had also discovered links between USIS principals and clandestine events involving the Iran-Contra scandal of the Reagan-Bush I administrations. Westhusing has also linked USIS to the illegal killing and torture of Iraqis. USIS personnel whom Westhusing was investigating had the keys to his trailer. In addition, Westhusing's personal bodyguard was given a leave of absence shortly before the colonel's death".

Seem a bit much like conspiracy theory to you?

Well how about Ptech? This Islamic funded company has its fingers in EVERY piece of senior US management and defense software and the principals have close ties to the Bush admin, and to terrorist funding.

Pull your finger out, discard your prejudices and TURN ON YOUR BRAIN!!!

Like I said way back when this Part thing broke that Bush was going to lose this one and it was gonna hurt.

What did Bush and Co. expect??? For the last four years they have been playing that US vs Them Fear card that carried a Muslims face i.e. Bin Laden. This is what you get. I don't know what he was thinking? He may have a lot of Buddies that wear turbans from the Middle East, but the average Gomer from Nowhere,GA equates anyone of Muslim Descent as a Terrorist.


Also, look for Halliburton to take over the Ports. Under Bush "ALL THE WELL CONNECTED GET PAID"… at the expense of the Tax Payer of Course