"Putin" On a Show For Bush 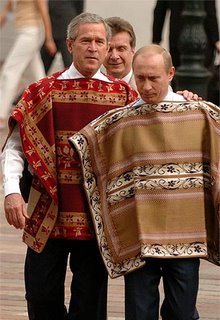 "I said I looked into his eyes and saw his soul. We had just come from a very long conversation when we talked about family matters and we talked about our own lives. I found in Vladimir a very genuine person, somebody with whom I could place my trust."

That was President Bush back in February of 2003 speaking about Russian President Vladimir Putin as the two held a joint press conference marking the 300th anniversary of the founding of St Petersburg.

Jump ahead four years, as news came out this past week that the Russians gave top-secret intel to Saddam and Iraq as the United States carried out its invasion, according to a Pentagon report. The unclassified 210-page report by the U.S. military's Joint Forces Command cites an April 2, 2003 document Saddam received from his minister of foreign affairs stating that then-Russian ambassador to Baghdad, Vladimir Titorenko, had provided the Iraqis with strategic intelligence on U.S. troop movements and bombing targets. The intelligence provided by the ambassador, the report stated, pinpointed U.S. troop locations at or near cities such as Baghdad and Kerbala, the site of the heaviest troop concentration.

So while our ever-increasingly-inept Commander-in-Chief was man-bonding with his new soulmate Vlad, this "genuine, trustworthy" ally was providing secrets to the enemy which surely resulted in the death of U.S. soldiers.

On that day back in 2003, when he looked into his pal's eyes, what he saw was the soul of a liar. Sadly, Bush is so disconnected to reality he wouldn't recognize integrity if it walked up and smacked him in the face.
Posted by The Ostroy Report at 2:31 PM

We now know that Bush and Putin are soul mates.

I'm sure Vladimir assured George it was just business.

George is giving him the "gonna bang you in the ranch" hand on the shoulder...