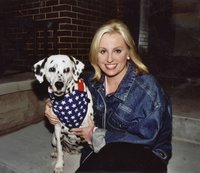 Nancy Skinner is one cool cat. I had the pleasure of interviewing her on my TV show last night here in New York. Nancy's running for Congress in Michigan's 9th District. She's a tough, savvy and charming progressive Democrat who is precisely the type of candidate the party needs right now. She's looking to unseat Republican incumbent Joe Knollenberg in this 50/50 swing district.

So just who is Nancy Skinner? She's against the war and big deficits; is against Bush's failed prescription drug bill; seeks affordable healthcare; is pro-environment and energy efficiency; strong on national security; and will fight to protect the rights of women, minorities and seniors. She currently hosts a morning radio talk show on Detroit's 1310 AM. She's a frequent commentator on CNN, MSNBC and Fox News, and has successfully duked it out with rabid right-wingers Sean Hannity, Neal Cavuto, Bill O'Reilly, Pat Buchanan, Joe Scarborough and Curtis Sliwa (you can watch clips on her web site). She's received the crucial endorsement of the United Auto Workers Union and a variety of state and local politicians, and has the support of the state's Democratic Party. She's told me more endorsements are forthcoming.

The seven-term Knollenberg is "arguably the state's most powerful Republican" in Congress, according to the Detroit News. He serves on the House Appropriations Committee, which controls the government's purse-strings. He's a big-spending Republican who voted for the Bush tax cuts for the rich, has voted for the Iraq war and has perpetuated the fear-mongering Saddam/9-11 connection rhetoric of the Busheviks. He's voted yes on restricting bankruptcy rules; voted yes on making the Patriot Act permanent; voted no on allowing human embryonic stem cell research; voted yes on restricting interstate transport of minors to get abortions; voted yes on banning partial-birth abortion except to save mother's life; voted yes on funding for health providers who don't provide abortion info; voted yes on banning Family Planning funding in US aid abroad; and has a 0% rating by NARAL for his pro-life voting record. He also has an "A" rating by the NRA for his pro-gun rights voting record.

And as if that wasn't enough to make you want to send Nancy money, Knollenberg's voted with Bush 98% of the time and with indicted former House Leader Tom DeLay (TX) 96%. He's received $12,000 from DeLay's ARMPAC, and he's given $7K to DeLay's legal defense fund. Ok, convinced yet that you could/should spare some dough to help Nancy send Knollenberg packing?

This Friday, March 31, is the critical end to the first-quarter fundraising period, and Nancy needs to hit her goals to keep the DCCC and Emily's LIST behind her and to get matching funds. You can do your share to help Nancy and to help Democrats take back the House by visiting her web site and making a contribution.

Fed up with George Bush's Republican cabal and the whole GOP culture of cronyism and corruption? Want to send the DeLays and the Santorums and the Knollenbergs back home? Then take action. Go to www.SkinnerForCongress.com and help Nancy raise the money she needs to continue the fight. It's easy; just a couple of clicks of the mouse and you can help Nancy reach her fundraising goals.

"When Joe Knollenberg first ran he advocated term limits. Fourteen years later he is still in office. He wrote the biggest pork bill in history. It's time for change," said Skinner. As chair of the House Transportation Appropriations Sub-Committee, Knollenberg presided over the massive $286 billion Transportation bill passed last year, which included that now infamous $233 million "Bridge to Nowhere" pork-barrel project which was eventually removed from the budget.
Posted by The Ostroy Report at 1:55 PM

I love Nancy and use to listen to her in the mornings on our Air America Radio station. I did give to her campaign even though I do not live in her district.

She will be great in Washington DC!

Cathy
From the once great state of Michigan

What an absolute laugh. Nancy was on WLS in Chicago for some time before she decided to run for a Senate seat that later went to Obama. Once she declared she could no longer be on the radio.

Now she wants to run in Michigan. What is this; shopping around for whoever will take her? We sure didn't want her.

What is this; shopping around for whoever will take her?

Sure why not the GOP does the same. These slithering snakes will do anything to keep power and further sell the country out and let Bush break the law with impunity.

Ever looked into the history of Orrin Hatch. He has been strangling Utah for too many years and wasn't originally from Utah. So Stands - what's your point?

My point is I'm glad we (Illinois) were not saddled with her. Maybe Michigan will have her.

Carpetbagging is no problem if the other location accepts the fact that they are 'seconds' and votes 'em in.