Bush/Rumsfeld and Another Big Iraq Lie 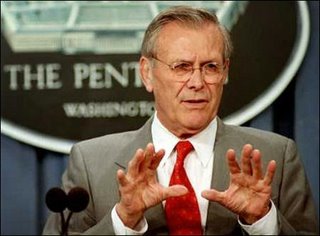 "The plan is to prevent a civil war, and to the extent one were to occur, to have the--from a security standpoint--have the Iraqi security forces deal with it, to the extent they are able to." That was Defense Secretary Donald Rumsfeld just a week ago. "There's a pilgrimage coming up. We may very well--General Casey may decide he wants to bulk up slightly for the pilgrimage." That was Rummy at Tuesday's Pentagon news briefing, suggesting an increase in troops is imminent due to an expected influx of Muslim worshippers in the coming weeks. The strategic gobbledygook from Rumsfeld is relentless: "And we're continuing to pull troops down." Kind of like John Kerry's "I voted for the war before I voted against it?" Which is it Don, are we pulling troops out or sending them in?

Rumsfeld's double-speak continued over the issue of whether or not Iraq is on the verge of civil war. He admitted that government agencies were assessing this possibility, but then issued the standard Bushevik denial of reality. "Is it true the people in the intelligence community are thinking about this and analyzing it and doing red team--A team/B team-type looks at it? Sure they are. And they should be. That's what people do. Do I think we're in a civil war at the present time? No."

The briefing coincided with the news that 85 bodies were found in Iraq, apparently killed execution style: bound, badly beaten, gagged, tortured, hung. The sectarian violence is clearly escalating, and the Iraqi police are either unable to control the mayhem or they may be condoning it or even behind it. But regardless, everyone except the Bushies seems to agree that there's mounting chaos there, posing a real threat to the stability of the country and to the U.S.'s goal of creating a democracy.

The NY Times Wednesday cites three officials involved in the troop increase discussions as saying the plan involves about 800 soldiers. Curiously, this is exactly the number Rumsfeld confirmed at the briefing that the British are pulling out of the coalition by May.
Posted by The Ostroy Report at 7:41 AM

Generally, I don't defend Kerry, but that is not what he said. Additionally, if one looks at the facts about what he actually said, it wasn't about flip-flopping, but instead two different appropriations bills, one of which Bush threatened to veto if he didn't get his way about reimbursement by the Iraqi's and provisions for body armor for the troops.