Bush is Losing His Most Loyal Supporters 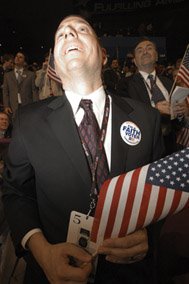 My friend Bob is a die-hard, stuck-in-the-mud Republican. A serious red GOP-flag waving, NRA card-carrying right-winger all the way. We've been friends for 25 years and love each other like brothers. But when it comes to politics we're as far apart as Jay-Z and Andrea Bocelli. He hates everything liberal and loathes the Democratic Party. And like many GOP faithful, he's been more loyal to President Bush than perhaps his own family. For years, Bob has been piss-drunk on Bush Kool-aid. The president, he'd argue, could do no wrong. Until now. The love affair is officially over. Bob has grown increasingly frustrated with the president over Iraq, Katrina and the ports deal. Says the war's failing. Says the response in the Gulf was atrocious. And he's downright livid over Bush's bizarre decisions involving the now defunct Dubai deal. And when Bush loses Bob, the House and Senate Republican incumbents better take cover.

This past week we saw Bill Frist (TN), Dennis Hastert (IL), Peter King (NY) and so many others in the GOP leadership orchestrate a near showdown over the ports issue. With a keen eye on November's midterms, these survivalists finally threw up their hands and said "enough's enough....we can no longer support you, Mr President. We've stood by you on Iraq, Social Security, the economy, Katrina, the wiretappings, the Cheney shooting....but we cannot stand by you any longer. You're bad for our political health."

And why have they gotten to this point? Because Dubai Ports World is truly bad for our national security? Because foreign countries should not control our waterways? Not likely. Rather, they've bailed on the president because they have their ears to the ground, and what they're hearing is the chilling voice of Bob. And without Bob in November, the GOP doesn't stand a chance.
Posted by The Ostroy Report at 7:45 PM

I really like your site. The comments are so dumb and uninformed that I sound like an intellectual (and I'm just your average bozo).

If you like intelligent stuff then head for existentialist cowboy

Anyway, I've left my comments on several of your topics and I'll be back to see what the locals have scratched together.

Remember: Voting for a Republican is like hiring a paedophile babysitter.

You wouldn't do that, would you?