Repugs Plan to Use Impeachment/Censure as Rallying Cry for '06 Mid-Terms. Democrats Better Get With the Program and Do the Same 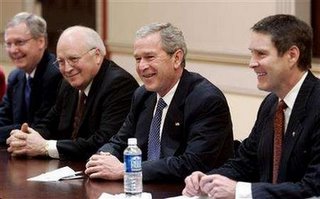 The mid-term elections are but a short eight months away, and the Democrats desperately need to figure out who they are, what they represent, and articulate this message in a way that resonates with voters. To that end, four weeks ago I wrote Impeachment Could Be the Democrats' Best Get-Out-The-Vote Message. Last Thursday the NY Times ran a front-page story on the Repuglicans' plan to use Sen. Russ Feingold's (D-WI) call for a censure of the president, as well as Democrats' possible threat of impeachment, to drive their base to the polls next November. It's 'gay marriage' all over again, and it's a strategy straight out of the Rovian playbook. Essentially, their message will be, "Going to let liberals take back the House? If so, just wait and see what they do to our beloved Bush."

"Impeachment, coming your way if there are changes in who controls the House eight months from now," wrote Paul Weyrich, a veteran conservative organizer, in a newsletter last month. He suggested that the threat of impeachment was critical in getting the GOP's demoralized base to go out and vote. With "impeachment on the horizon," he wrote, "maybe, just maybe, conservatives would not stay at home after all."

As expected, the Repuglicans' loyal legion of media spinners and talking-heads have hopped on the bandwagon. "This is such a gift," said radio host Rush Limbaugh, claiming that the Democrats are making the precise political miscalculations he's predicted, and that they have little else to run on except "this impeachment thing." But he is right about one thing: this is a gift. For the Democrats. But in order to be a viable tool, impeachment must evolve out of the grass roots and blogosphere and into the offices of prominent national candidates and the party's leadership.

What President Bush has done is give operatives like DNC head Howard Dean and DCCC head Rahm Emanuel a golden opportunity to rally the liberal troops and even appeal to independents and moderate Republicans: he broke the law. If the Dem's fail to mobilize around this central theme, they'll be blowing one of the best political opportunites in decades.
Posted by The Ostroy Report at 3:57 PM

Anyone with a brain, knows what would be the Dems plan if they take over the House where impeachment starts.

People need to realize though that many Repubs are in safe seats and will win election hands down.

I will admit that both sides could use the threat of impeachment as a good reason to vote.

Cathy
From the once great State of Michigan (We have the highest house foreclosures in the country.)

A lot of folks seem to think theDems will make gains in the coming elections similar to those of the conservatives in '94.
I see no evidence of this so far.The Dems have no equivalent of GOPAC and Newt Gingrich. Gingrich is planning to throw his hat in the ring in '08. What an appalling image that conjures!

There will be a change in government this fall. I have NEVER heard so many people saying they are so damn sick of the present party in power that they want change, all the polls even back this. It is even evident in local elections and here in Largo, Florida pop. 70,000 this month we elected our first female mayor and first black commissioner. We also through out every incumbent running, not only in this city but neighboring cities as well. People are ready and want a change, this was heard and seen at the voting booths and will be seen this November through out this nation.

The Republicans will be jumping ship in droves but I hope the Democrats are smart enough to point out how these ship jumpers voted when they were all aboard the SS BUSH for all these years.

Cathy, at least you have not been double Bushed in Michigan as we have here in Florida, Jeb is history after November.