Yes, Hamas Has Been Democratically Elected, But That Doesn't Obligate Israel To Recognize It 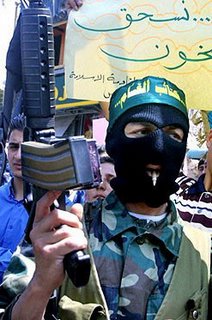 Much has been said about the January 25th Palestinian elections where an overwhelming majority of the people voted to replace Fatah with the terrorist organization Hamas, a group that proudly takes credit for the horrific suicide deaths of hundreds of innocent Israeli men, women and children, and whose primary mission is the destruction of Israel. In turn, Israel has cut off some $50+ million in tax payments to the Palestinian Authority, which is threatened with economic devastation if the payments are withheld long-term (since then the European Union has stepped in with $145-million in temporary aid).

Acting Israeli Prime Minister Ehud Olmert said his government will not deal with any Palestinian government which involves Hamas. He said Hamas' victory signifies that "the Palestinian Authority is, in effect, becoming a terrorist authority. ... Israel will not agree to that. The stopped payments include taxes and customs duties it collects on its behalf each month on imports and from Palestinian merchants and laborers working in Israel.

And the Israelis have been vilified over this hardline stance over everything from humanitarian reasons to its unwillingness to accept that Hamas was elected through a Democratic process, and that it should accept it as political counterpart. I don't think Israel has a problem per se with the election itself. Rather, the Palestinian people had a choice, and they have spoken, rewarding a 20-year-old terror organization with a landslide victory and the keys to their nation. Israel's stand is more like, Ok, you made your bed, now sleep in it.

Yes, in a Democracy one has the freedom of choice. And Israel surely recognizes that. But the Palestinian people could have just as freely kept Chairman Mahmoud Abbas in power and they didn't. That they decided to hand over the country to a ruthless band of suicide bombers does not in any way obligate Israel to turn the other cheek and recognize, or legitimize, this murderous bunch of terrorists hellbent on its destruction. The Palestinian people have spoken, yes, and so has Israel. Isn't Democracy a wonderful thing.
Posted by The Ostroy Report at 10:17 PM

You may be right, but then we would have to allow the rest of the world to stop recognizing Bush!

There is a social compact among nations that whatever their mode of government, ruthless dictatorship, divine right monarchy, parliamentary democracy, or separation of powers democracy, the choice is either to acknowledge the form and take what it gives, or assert that the nation is not following its own precepts, that a revolution has taken place, and that pending a clearer answer you will suspend the decision to recognize.

Clearly, the Palestinians have duly elected the party they want. There may have been a revolution in thought, but the mechanism is secure.

Israel should recognize them and deal with them, or declare war on them and defeat them and live with the outcome of that.

wow, that makes a lot of sense: recognize them or invade them. how about just marginalize them and let them implode? These bastards have blown up Israeli babies and kids in schoolyards. Israeli should recognize them? And in case you havent noticed, Israels already at war with Hamas.

to not recognize them is to de-legitimize themselves.

This is the proving the negative problem.

Otherwise you're "no better than they are".

Andy, wonders never cease. I completely agree with your post.

As for anonymous posters, I wish you would label yourself somehow. As it is, it looks like one guy arguing with himself.

Anonymous #1, you have swallowed the tripe of moral equivalency between Israel and Palestine.

Anonymous writes...."You don't have to acknowledge them, but when asked, you can't say you don't recognize a democratically elected government."

Oh contrare. So what you're saying is, foreign voters can elect anyone, including terrorists, murderers, etc and the world is obligated to go along with the lunacy?

Countries like people can do what they want to do and deal with the consequences. Of course, countries can bring down innocent, powerless citizens of all the countries involved, but, heh, as the rubes say" A country's gotta do what a country's gotta do."

If Israel won't recognize them, at least they can pay up what they owe and allow them to control their own citizens. I have posted this before and I still believe that the democratically elected government should be given the benifit of the doubt until proven otherwise. No, Israel does not have to recognise them, but they should be able to do with out the Israel aparthide and Israel tax collectors and Israel security forces on Palastinian land.

"I still believe that the democratically elected government should be given the benifit of the doubt until proven otherwise."

They already have proven otherwise before the election. Israel would be completely foolish to send one dime to an entity that has just voted in people committed to their destruction.

As for throwing out the "democratically elected" jargon, nobody is telling them they have to reverse the election. They had the right to vote Hamas in, but they now deal with the entire package of what goes along with that.

I agree with this article, but has anyone wondered if Hamas took a page out of the Republican handbook and stole the election?

I agree they need to make their bed and lie in it. But, I have empathy for those (like blue staters here) who are victimized by the poor judgement of neocrapheads.

Other countries have the right to deal with them any way they wish...
just like France said "No!" to Bush's idiotic premise for the Iraq mess.

Yeah, well I must say 200 nuclear bombs, umpteen fighter aircraft, wall to wall tanks, the occupation of THEIR land , the attempts to set up partitioned Bantustan-type enclaves, the denial of any national moral legitimacy - oh, and perhaps you should check the numbers of Palestinians who have died. Do their mothers love their children any less?

Really, this is too *#!!*&*!!! insane for words. Let's face it, Israel is not going to return Palestinian lands, particularly those water catchment areas.

When you get around to honestly acknowledging that equal truth you will be listened to. Not before.