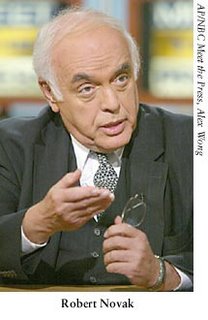 When you've lost Bob Novak, can it get any worse? The cranky conservative pundit lately has been about as critical of President Bush as those on the left. In his syndicated column Thursday, Novak said the replacement of White House Chief of Staff Andrew Card with "professional bureaucrat" Josh Bolten surprises no one, accomplished little, reaffirms Karl Rove's supremacy in the White House, and disappoints those in the party who desperately want a Reagan-esque cabinet-cleaning to combat Bush's abysmal approval rating. Back in 1987 facing 40% approval following the Iran-Contra scandal, President Ronald Reagan ultimately silenced his critics by firing many in his cabinet and bringing in fresh blood from Howard Baker as his new Chief of Staff, Kenneth Duberstein as Deputy Chief of Staff, Frank Carlucci as Defense Secretary and Colin Powell as National Security Affairs assistant.

According to Novak, Bush has blown a huge opportunity to pull off such a strategic coup, instead further igniting the ire of his GOP detractors and perpetuating the popular belief that he is incapable of doing or saying anything that could be taken as an admission of mistake and/or failure.

The move to Bolten reinforces Rove's dominance within the Bushevik Monarchy. Since the mid 90's, Novak said, Rove's been on a mission to rid the administration of those who had ties to Bush Sr (Card served in Bush 41's cabinet as Deputy Chief of Staff as well as Assistant to the President). Bolten is a Rove man, hired by "Bush's Brain" in 2000 out of Goldman Sachs to head the Bush/Cheney team in Austin, Tx.

Now a real shakeup would include Rove, Cheney, Rumsfeld and Condi Rice, all of whom, along with the King himself, have committed more egregious misdeeds than any others in modern history, and should be kicked to the curb. Don't hold your breath.
Posted by The Ostroy Report at 9:52 PM

Pehaps the shakeup will happen when some of them end up in jail.

No surprise here. Bush is not in charge. How could he get rid of those who tell him what to do?


Cathy
From Michigan, where one only has to take a look to see what our economic future will look like.

Remember when Bush/Rove was looking for a VP to run in 2000 and Dick picked himself? Bush is just the puppet and the other boys are pulling the strings.

Hang in there Cathy we here in Florida, the home of the hanging chads have been double Bushed for all these years and our school system is really screwed up thanks to brother Jeb.

THE RIGHT WING AGENDA said...
This comment has been removed by a blog administrator.
4:34 PM

Hang in there Cathy we here in Florida, the home of the hanging chads have been double Bushed

Looks like Novak is having another attention defecit bout and needs a fix.

On a side note I do hear that Bush plans to replace the head cook and gardner. That should shake things up a bit.