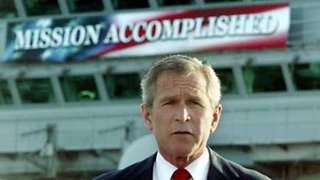 America has spoken, and for George W. Bush, it's not pretty. Asked to use one-word answers to describe how they felt about the president, an astounding 48%--virtually half the country--said "incompetent," "idiot," and "liar." The Pew Research Center survey released this week shows a stark contrast to how Americans answered the same question three years ago, when positive one-word descriptions of Bush, such as "honest" and "integrity," far outnumbered negative ones. In the current poll, only 28% used positive words. And previously used superlatives like "excellent" or "great" were virtually non-existent.

The survey casts Bush's overall approval rating at a pathetic 33%. With a few more dead soldiers and a civil war in Iraq, combined with a couple of more political blunders like Harriet Miers, the ports deal and illegal NSA wiretappings, the president just might find himself facing single digits in the not-too-distant future.

Other highlights of the survey include:

-Only 42% now approve of Bush's job in handling terrorist threats, an 11-point drop since February.

-Only 65% of moderate and liberal Republicans approve, down from 82%.
Posted by The Ostroy Report at 6:00 PM

Gee….Good to see the rest of America caught up to those of us that already knew all this the way back in 2002.

Never underestimate the Slowness and the gullibility of a Red State Inbred Slackjaw..at least that is what the GOP counts on.

Once again thanks!!! To those that were too stupid to see the truth or too lazy to get the facts about this Moron before the last election.

Just think we got another two years of do nothing policies, inarticulate speeches, Lies and half-truths and TOTAL incompetence...enjoy.

Well said Mr. Smoe. I just saw on TV the serious protests against their government by the French for what they feel is an injustice. What has happened to Americans? They are not even writing letters to the editors or performing even mild protests. What have we become?

What has happened to Americans? They are not even writing letters to the editors or performing even mild protests. What have we become?

Perhaps the prospect of being put on a government surveillance list or the no-fly list has had the planned chilling effect on dissent as planned.