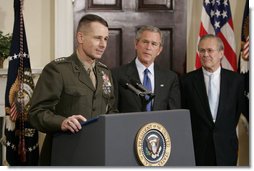 Kudos to Tim Russert, host of NBC's Meet the Press. Russert's guest Sunday was General Peter Pace, Chairman of the Joint Chiefs of Staff. Like the good partisan soldier that he is, Pace defended the invasion of Iraq and offered up the usual spin that everything's going "very, very well." He also blamed the massive unpopularity of the war on the media for only showing America the negative news. Don't they ever get tired of regurgitating this inane rhetoric?

With great loyalty and courage, the General did his best to defend the administration's colossal miscalculations about WMD, the size of the insurgency, the level of initial troop strength and the likelihood of civil war. According to the Bushies and their Sunday spokesman Pace, no one--not the public, the media, politicians--has an ability to see what's really going on on the ground over there. Everybody's got it wrong, except them, Pace suggested. And we're supposed to believe them, when they've been dead wrong about everything so far? Give Pace points for trying. Like I said, he's a loyal soldier in Bush's army.

But the unintentional honesty came when Russert nailed Pace to the wall with a very simple question about overall safety in Iraq. Russert read Pace a quote from staunch conservative writer William F. Buckley, who recently said: "One can't doubt that the American objective in Iraq has failed. ... Our mission has failed because Iraqi animosities have proved uncontainable by an invading army of 130,000 Americans." Buckley said there were two postulates: "One of these postulates, from the beginning, was that the Iraqi people, whatever their tribal differences, would suspend internal divisions in order to get on with life in a political structure that guaranteed them religious freedom. The accompanying postulate was that the invading American army would succeed in training Iraqi soldiers and policymakers to cope with insurgents bent on violence. This last did not happen. And the administration has, now, to cope with failure."

The brilliant comeback by Russert: "Do you really believe it'll be safe for William F. Buckley to walk the streets of Baghdad?"

And the tail-between-the-legs-of-the-week award goes to (drumroll please)...General Pace: "I think not all the places in Baghdad, no, but I do believe that if he had a chance to get over there, properly escorted--I would want to be escorted myself..." Sure, all Buckley needs to do is strap on some body armour, hop in a humvee and surround himself with soldiers and he too can see first-hand all this amazing progress.

Beautiful, just beautiful.
Posted by The Ostroy Report at 4:03 PM

It's the same old crap from these clowns. Now they parade out some guy with Medals and Bars to spout their same old tired Rap that even the most Inbred Red State Rube no longer Buys.

These Pentagon types have learned how to play the game under Bushco. You either spout the Party line Mantra or your ass is gone. Don't think so??? Just look at Gen. Shenseki and Colin Powell.

It really doesn't matter as you can only put Lipstick on a Pig so many times before it is just another Stinking Pig with Lipstick.

THANK YOU MR. PRESIDENT..THANK YOU FOR EVERYTHING!!!

They keep getting away with it over and over and over again. How is this possible? Are we Americans brain dead? What happened to the old wisdom: fool me once, shame on you; fool me twice, shame on me. (This is the one Bush couldn't get right in a speech, even with a script in front of him.)
In this case we should substitute "fool me" to "lie to me", "harm me", etc.

I think the majority knows that it's a lost cause. You don't hear the Love it or Leave it flag-wavers that much anymore ..do ya??? But what are you gonna do??? Bush and the Neo cons blew it!! We can either leave and the region will be destabilized or we stay and take our lumps.

The onus is not on those of us that never supported this cluster to come up with any answers. Bush and the Neo Cons had them all at the beginning and wanted no input.

The half that voted for Bush are for the most part a gullible lot with a short attention span. The war isn't any fun anymore so it's just easier for the sheep to turn the channel and see what's on SURVIVOR.

Better yet let’s just stick another SUPPORT OUR TROOPS bumper sticker on the back of the minivan before we go to church…that will make it all better.

It's Bush's war let him figure it out...all we have to do is pay the final bill.

Pssst...even the minivan drivin, church goin, god fearin folks are having their doubts! Pass It On!

This good news message brought to you from the reddest state in the union. Look up a poll to find out which one!

Seriously, I'm surrounded by "them" and I'm hearing alot of unhappy talk. Either the predominant religion hasn't been harping on the GOP party line or they too realize it's time to cut and run!

Should get interesting or at least mildly entertaining...

Anonymous said:Pssst...even the minivan drivin, church goin, god fearin folks are having their doubts! Pass It On!

Would that be UTAH? So will Mormons vote against the GOP Majority in the next election?

Please elaborate on what your hearing??

I don't think that old habits can change that quickly here in UT and so I think that GOP will still be the majority party in fall elections. What I am hearing is people, in disbelief that their middle class lifestyle is fading, voicing deep concern over the economy, the war, and Bush's track record. Hello? It took things to get this bad before they could switch on their adult brain?

Newspapers are running anti-Bush letters to the editor! Unheard of a few years ago!

It was so bad in the 2000 and 2004 local elections, democratic candidates refused to run for office. Why waste the money. Now it appears that a few will add their names to the ballot.

Governor Huntsman, who is a republican, is more, dare I say, moderate and has been forceful in getting much needed changes. He understands that no one in their right mind wants to expand their companies into Utah. Workers refuse to be transferred here or they move out of Utah ASAP. Gains in the business sector made during the olympics seem to have faded.

The GOP representation and church influence is so heavy here you can slice it with a knife. If you are a democrat you don't usually even mention it to anyone.

The biggest thing, in my opinion, is the fact that people here are beginning to voice their distrust and disappointment in the Republican agenda. That's HUGE for here. They are risking being ridiculed by other church members and the red state mentality police in general!

That sounds like the Stepford/Orwellian world the GOP wants to impose on the rest of the country. Pretty scary..I don't know how you tolerate those strip malled clones and their red state world??? But it is good to hear that even some of the Robots are shaking off their programming and seeing how Bush and GOP are screwing everyone..not just those that don't buy their Slop.


I am hearing the same is happening in other Red States…it’s about time. Boy, these idiots are thick. Hopefully it’s not to late.

thanks for the insight.