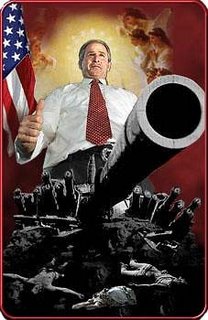 The new GOP talking point being regurgitated ad nauseum is that the Iraq war is a smash success, chock full of progress, but that the biased American media is hellbent on only reporting the negative: death, civil war, suicide bombs and IEDs (Improvised Explosive Devices), or, booby traps. Whether it's the president himself, Cheney, Rumsfeld, Joint Chiefs Chairman Peter Pace or the right-wing talking-heads like Limbaugh, Hannity and Ingraham, it's blame, blame, blame the media. It's like everything else they do: bait, switch, lie and deceive. Oh, the progress is really there, they say. The success is obvious, they say. You can't actually see it though, they say, because the media hides it. It's like Richard Pryor's famous bit when caught cheating by his wife: "Who you gonna believe, me or your lyin' eyes?"

Consider some of the statements this past week:

Bush: "This is quiet, steady progress. It doesn't always make the headlines in the evening news. But it is real and it is important. And it is unmistakable to those who see it close-up."

Pace: (on NBC's "Meet the Press"): "I don't think we're getting the goodness out to the American people the way we should....The amount of coverage from the war zone is much less than it used to be... People don't get a chance to see or hear about all the good things that are happening."

Rumsfeld: (at Pentagon press briefing): "From what I've seen thus far, much of the reporting in the U.S. and abroad has exaggerated the situation."

I work in a military environment and you wouldn't believe the LACK of discussion on the war around here... I'm in a building of at least 3000 people.

When Bush started his "hate the media for not telling you the guudness" tour a Major said at a lunch table "If there is so much good stuff going on there, wouldn't Fox News be shoving it down our faces constantly?"

Rest assured that if Iraq had turned out the way the neo cons wanted they would use it to SHOVE every and all GOP policies down the throat of the country the way they did with 911 during the first Bush term. Now things are headed south for Bush and he is running out of things and people to blame for HIS WAR.


THANK YOU MR. PRESIDENT....THANK YOU FOR EVERYTHING!!!!

This is the last gasp. Watch for those poll numbers to keep heading south.

This is exactly what they used to say in Southeast Asia (Vietnam for you illiterate neo-fascists). The briefings were called "the 5 O'Clock follies" because they were so full of BS.