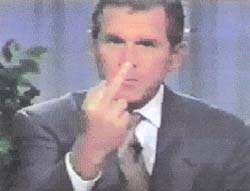 Back in 2000, a campaign mantra of George Bush was "I'm a uniter not a divider." In retrospect, he couldn't have been more off the mark. In his 5 1/2 years as president, Bush has succeeded in dividing just about everything and everyone he's come in contact with: our allies, Americans, religious groups, Congress and the media. And now he's very close to alienating himself from the last vestige of support he's enjoyed: his own party.

The United Arab Emirates ports deal has been the proverbial straw that broke the GOP leadership's back. With many facing re-election this year, House and Senate Republicans have been jumping ship faster than Leonardo DiCaprio in Titanic. The president has been curiously inflexible in his push for the sale to close, even threatening to use a first-ever veto to beat down Congress if necessary. Reluctantly, he's agreed to a 45-day investigation so that lawmakers can properly vet the deal (an investigation which just happens to be required by law, a little annoyance Bush initially overlooked).

When you add this Dubai Ports World deal to the 2005/6 Bush Greatest Hits album--torture, Harriet Miers, Katrina, Shooter and Scooter, illegal wiretappings and other PR disasters--it spells trouble for incumbants like Bill Frist, Rick Santorum, Dennis Hastert and John Boehner. I'm not sure who's been harder on him lately, them or Democrats. It's safe to say, the lame duck just got even lamer.

With his Republican brethren abandoning him in droves, The Great Divider has brilliantly completed the last link in the alienation chain. What's left, separate beds for him and Laura?
Posted by The Ostroy Report at 8:21 PM

If Bush gets the line item veto, here at home we are doomed. As more and more Americans lose their good paying jobs or else are forced to take jobs that pay half of what they made before, Bush will veto any programs to help those hurting.

The only problem is that more and more Americans, many who use to be in the middle class, will be hurting. Many of these workers are in their 50s and have worked their whole lives. Everywhere I look there are homes for sale and the want adds are very slim in our local papers.

Remember this is all part of Bush's ownership society which means "your on your own". Of course no one seems to care or point out that it is his policies that have put us where we're at today.

Bush is by far the worst president in history. Heck of a job, Bushie!

Cathy,
Once again you’re right. This lying Idiot won't do anything to rein in spending, as he has been the point man on most of it. He'll use it to do what he has done all along that being use it to ram through his EVIL AGENDA and silence opposition.

Just look what this jackass has done in just 6 years. When he came in there was 4% unemployment. If you didn't have a job you didn't want one. That and he took a surplus and pissed it away.

I know that economically Michigan has really been hammered. I remember before the 04 elections there was the interview of some Bible banger from Michigan that had lost his Good paying job and was now delivering Pizzas just to survive, but this moron was still going to Vote for Bush, as it was the MORAL THING TO DO. Do you think these idiots will wake up and vote their pocketbooks this time???

All you have to do is go to any right wing Blog and go at fact for fact that Bush has taken the country to a worse place then he found it and point out that everything this jackass has espoused has either been wrong or a lie and there will still be those that will support this FALURE and his Admin. Bush has come on a long way on playing on the Gullibility of the American people…the GOP may still pull it out in 06 because as my old man would say “THERE ARE A LOT OF STUPID OUT THERE.

However Bush has brought about unity in at least one quarter. Historians have traditionally been contentious about which president is the best and which has been the worst. They are now approaching the uniform opinion that Bush is the worst president this country has ever had.

This is particularly remarkable since historians have traditionally been unwilling to cast a judgement about a president until he has been out of office for a dozen years or more. In this case, it seems that the judgement is just too clear.

The Republicans have gone completely berserk. They refuse to investigate the illegal wiretapping--pass a budget bill that is devastating to the elderly and the poor (of which I am both) and then pat themselves on the back for cutting money for veterans. What a bunch of balony. Bush is certainly the worst president we have ever had but our country will be bankrupt and overtaken by the Chinese or Arabs or both before we can do anything to stop it. If only some of these republicans would get a heart or a conscience

He has united the left.

We should take advantage of it to turn things around, and if that means kicking out these Democrats who refuse to stand up for the American people, then let's get started, right now.

I think the picture Andy included with this comment is of the 1,000 words variety. Bush has been flying the finger at the citizens of this country for far, far too long.