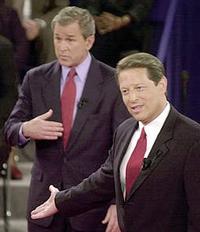 The NY Times Sunday ran a cover story in its magazine section on the Democratic dark horse candidate, former Virginia Gov. Mark Warner, whose been creating a bit of a buzz within the left's Republican-lite circles lately. Warner, a NASCAR-loving Southerner who supports the NRA, parental notification for minors' abortions, and big business, is the favorite among some Hillary-fearing, victory-seeking Democrats. Sure, he satisfies those who seek to mirror the conservatives on values issues, and is surely someone who'll appeal to rich, white Southerners. But what about the rest of America? What about the base? Will they vote for someone who more often resembles a Republican than one of their own? Is that really what Democrats will want after eight years of Bush & Co? Can he ultimately win?

Most Democrats know two things: that they love the idea of Sen. Hillary Clinton running for president, and see her sailing through to the nomination; and that she has a minimal chance of winning the national election. Her financial warchest (estimated to be $75-million by '08), political clout and sheer momentum almost assures her easy victory over the current pack of presidential yawnabes, among them John Kerry, John Edwards, Evan Bayh, Joe Biden, Wesley Clark, Russ Feingold, Bill Richardson and Warner. None of them--emphasis on none--stand a chance against Clinton. She's too powerful for the money-people and the DC insiders to go against; not with this current crop of choices. No one wants to be left out of the cold if she just happens to go all the way.

There's only one candidate who has the political capital and overall gravitas to not only win a showdown with Clinton, but to win the big prize as well. "This sounds absolutely strange coming from me, because I never in life thought I would utter these words again, but Al Gore," said Democratic consultant Donna Brazile in Sunday's Times story. Brazile, Gore's campaign manager in 2000, suggests that Gore has the national profile and fiery enthusiasm to generate excitement from the base. When you think about his staunch anti-war stand from the get-go; his years of environmental advocacy; his impressive political dossier; and the fact that he did win the popular vote in 2000 (and as many believe, the electoral college as well), it's not hard to imagine a Gore candidacy emerging sometime in the next year. The Times cites former advisors who say the former Veep is uninterested in running, but don't believe it for one nano-second. It's all part of his own momentum-building campaign.
Posted by The Ostroy Report at 7:44 AM

What about Gore v McCain? I would love for Al to run. No matter what, I will know in my heart that he got robbed in 2000.

I find it hard to think the Repub base will go for McCain. I bet they want Frist. I think the powers that be will want McCain. I use to hold McCain in high regard until I saw him sucking up to Bush. Remember when Kerry was courting McCain to run with him? Rumor has it that, that is when a deal was made with the Bushies to not run as VP with Kerry and we will help you in your 2008.

I think Frist would be the weaker candidate for the Dems to run against.

Gore will stand a chance if he doesn't listen the the DC insiders like Brazile. She a loser.

I like Russ Feingold. He's about the only Senate Dem with balls.

What we need are politicians willing to stand and fight. This is War!

If the Democrats are really stupid enough to select Hillary, they deserve to lose against whatever evil neocon the Republicans run. I have nothing against Hillary, but Rove and his gang will rip her to shreds. It's time for Gore to choose Edwards as his running mate. Those are the two who can win, and this time, winning is everything. If the Dems choose Hillary as the candidate, I shall never vote Democratic again. I have no patience with that level of stupidity.

You overstate Warner's Republican Lite, because you fail to tell what miracles Warner accomplished in Red Commonwealth Virginia.

You overstate Hillary's base. She is loathed by conservatives and a huge number of Progressive Liberals. The Clintons are opportunists and very bad for the Democratic Party.

But, you are right on about Al Gore. He will run and he will win, but he needs to spend some serious time in Tennessee to thwart the swiftboaters there.

To me, Gore/Clark is the dream ticket. The politician and the general. In this day and age of war, nukes and terrorism, it's a really winning ticket

IT SEEMS TO ME THAT THE WAY WE RATIONALIZE OUR INEFFECTIVENESS AT CALLING TO ACCOUNT THE BUSH ADMINISTRATION IS BY PLAYING THE "WHO WILL BE OUR NEXT CANDIDATE?" GAME.

HECK, LOTS OF DEMOCRATS CANNOT EVEN STAND UP FOR RUSS FEINGOLD'S
'CENSURE' MOTION, WHICH IS A MOTION WITHOUT SANCTIONS.

WE DON'T HAVE A SPECIAL NEED FOR "DEMOCRATS WITH BALLS" OR EVEN FOR "PROFILES IN COURAGE"; WE SIMPLY NEED CITIZEN-REPRESENTATIVES WHO WILL DO THEIR SWORN DUTY TO REPRESENT

AND STAND UP FOR
"WE, THE PEOPLE"!

"The Clintons are opportunists and very bad for the Democratic Party. Good to see the republican spin hasn't been wasted. There is a concerted effort by media pundits to paint Hillary as a opportunist who bases her opinions and votes based on her political ambitions and not on the merits of her position or the legislation. Listen, and you'll see this theme repeated over and over in phrases like, "She's positioning herself..."

It has been said over and over again, any one running for president that voted for this invasion will NOT be elected in 2008. John Edwards last week FINALLY said he's sorry for the vote and it was wrong, too little too late John. Kerry and Hillary, the same story, too little and WAY too late.

So let's see who we have left, why it's none other then Al Gore, Howard Dean and Russ Feingold. So hang on to your skivvies mates it's going to be a fun ride next year.

I,m with the previous Anonymous, It needs to be Gore and Clark.

Most Democrats know two things: that they love the idea of Sen. Hillary Clinton running for president, and see her sailing through to the nomination . . . .

Huh? I'm a Democrat, she's my Senator, in fact, and I don't see she's got a chance in Hell of getting the nomination. It seems more like a GOP fantasy than something entertained by our side.

Where'd you get that?

I'm a Dem trapped inside a red state. No way do I get the impression that Hillary will be the choice to run for President. I do think those who think that are drinkin' the GOP spin koolaid. It's a clever plan to frighten Dems into runnning to their side. I'm with Molly... no way in hell is Hillary going to get the nod. I support Gore/Wesley Clark all the way!

I would like to see a Gore, Edwards ticket; we can beat them w/this. How do we promote such an alliance.