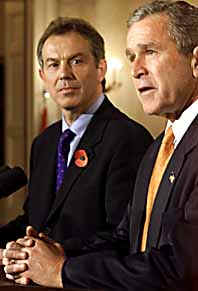 The New York Times Monday reported in a front-page story a British memo from January 31, 2003 that's surfaced showing that President Bush and Prime Minister Tony Blair made the fateful decision to invade Iraq well before weapons inspections were completed and before the U.S. had presented its case to the United Nations Security Council. In short, Saddam's goose was cooked before he ever had a chance.

So says British author Philippe Sands, who reports this memo and other explosive pre-war revelations in his book "Lawless World". Back in 2002/03, Saddam was warned to lay out his weapons for inspection or face invasion. 2300 dead soldiers later, the tragic irony is that no weapons existed, and war thus became inevitable.

Appearing Monday on MSNBC's HardBall, Sands told host Chris Matthews that the decision to go to war was made "irrespective of whether or not weapons were found," and that Bush and Blair had "no real evidence and very limited material." Sands said that in the absence of such evidence, Bush and Blair sought means to provoke Saddam into a confrontation, even planning to use a U.S. surveillance plane in the colors of the United Nations in hopes of drawing fire.

Sands told Matthews he believes that the plan to attack Iraq was first hatched right after 911 and gained momentum in the ensuing months. "I think by March 2002 a decision had been taken probably, I think, to show that the U.S. was tough on terrorism, tough on the causes of terrorism, and the easiest target was Iraq. As it turned out, it was the wrong target."

When asked by Matthews about Bush's recent denials of ever linking Saddam to the events of 911, Sands replied: "This is a president who seems to have a rather selective memory and a rather selective relationship with issues of competence. One of the most striking things I discovered in the memorandum was that when asked by the British Prime Minister what his plans were for once the real war was over, the U.S. president, Mr. Bush, replied that he didn't think there was going to be any internecine strife. There wasn't going to be any sort of insurgency. So what we're having here...is a re-writing of history. And when all of the material emerges, it will not show either the U.S. president or the British prime minister in a very good light."

Sands went on to discuss yet another memo, one even more revealing and significant than the January '03 memo, and which did not appear in the Times coverage of the story. The second memo, according the Sands, "recalls a conversation between then-Secretary of State Colin Powell and his counterpart in the United Kingdom, Jack Straw, which makes it clear that in Colin Powell's eyes, if there wasn't enough evidence for a 2nd Security Council resolution, then there wasn't enough evidence to justify the U.S. going it alone. So Colin Powell was spot-on, but it seems he was overridden by a president and others in the administration who were absolutely committed to taking the Unites States to war, tragically in erroneous circumstances, and irrespective of that the inspectors found."

Sands also refutes claims by the Bushies that they had little reason to expect anything but a welcoming as liberators by a thankful population of Sunnis, Shiites and Kurds: "We know that they had received clear advice from people who know the region in the State Department, from people who know the region in the Foreign Office in London, that precisely what has happened was going to happen. I can direct you to reams of documents in the public domain of people saying, 'this is where it's going to go wrong.' So it's not that the president hadn't been advised. He had been told and chose to override that advice."

The real tragedy Sands said, is that with respect to the real and dangerous threat to the U.S. and U.K from Iran, the public of both countries have had their trust broken, and have lost faith in their leadership. Unfortunately this has occurred when the threat is very real.
Posted by The Ostroy Report at 9:56 PM

Then the question is why did Powell go ahead with his speech to the UN knowing full well it was all a lie? He too should be considered as one of the many that should be placed in prison for war crimes.

Anyone that backed this invasion should be investigated for their actions.

The Hague for these bastards and the staff who enabled them to commit two nations to this tragic folly.

Sands told Matthews he believes that the plan to attack Iraq was first hatched right after 911 and gained momentum in the ensuing months. "I think by March 2002 a decision had been taken probably, I think, to show that the U.S. was tough on terrorism, tough on the causes of terrorism, and the easiest target was Iraq. As it turned out, it was the wrong target."

By all appearances, the plan was drawn up much earlier than 2002 (in fact the first gulf war would have wound up this way had Bush the First been convinced he could have controlled the oil). 9/11 was a pretext.

Iraq was not the "wrong target" for Bush because his reasons for invading Iraq never had anything to do with terrorism anyway.

Hey... Bush.. you proved in business you couldn't put a f*cking plan together and now in the gov't you can't either!