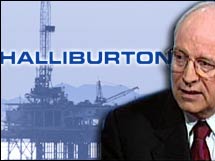 Ladies and gentlemen, moms and dads, hurry, wake the kids. We have some startling news. It appears the U.S. government got hosed by Halliburton! Now who on earth could've imagined that, huh?

According to a story in Wednesday's Wall Street Journal, the Pentagon issued a rare warning to Halliburton, Dick Cheney's alma mater, to shape up or ship out. News of this comes from a report issued to Rep. Henry Waxman (D-CA) which seriously questioned the company's "Restore Iraq Oil 2" contract which was awarded in January 2004 to rebuild the country's southern oil fields. Halliburton subsidiary Kellogg Brown & Root billed and received $365 million, 12% of which was part of an investigation into questionable practices such as "intentional overcharging, exorbitant costs, poor cost reporting, slipping schedules, and a refusal to cooperate with the government," according to The Journal.

Pentagon officials on August 28, 2004 sent a "letter of concern" to Halliburton, essentially accusing it of padding cost and improperly tracking expenses. By year's end an independent contractor hired by the Pentagon to evaluate the project concluded that Halliburton had "misled" and "distorted" its reporting. By January 2005, Halliburton was issued a rare ultimatum, a "cure notice," to remedy the abuses or the contract would be terminated. The U.S. lifted the warning five months later, but due to Halliburton's misdeeds, cut the company's overall compensation and bonuses short by about 20%.

Waxman cites the Halliburton scandal as illustrative of the Busheviks' failure to successfully rebuild Iraq.
Posted by The Ostroy Report at 9:45 AM

I'll believe it when I see it.

THANK YOU MR. PRESIDENT....THANK YOU FOR EVERYTHING!!!!!

Shut them down and sell off all the assets. Don't forget to go after the off shore bank accounts, especially dick's.