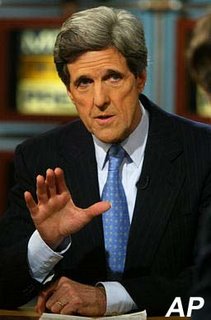 Man your battlestations! Sen. John Kerry (D-MA) has teamed with war pals Max Cleland, former Georgia senator, and fellow ex-Swift boat skipper Wade Sanders in an all-out effort to support the Congressional campaigns of some 70 Iraq war veterans. And through an email last week, Kerry raised $250,000 in just one 24-hour period for three: $100,000 for Tammy Duckworth in Illinois's 6th District, and $65,000 each for Patrick Murphy in Pennsylvania's 8th District and Joe Sestak in Pennsylvania's 7th District. $20,000 went to support other candidates. Kerry has now raised over $1-million online in the last six months, according to aides. John Kerry reporting for duty!

Despite having lost his bid for president, Kerry has remained highly relevant and influential both inside and outside the beltway. Back in '04 he raised $80 million via the Internet and amassed a valuable email supporter list of about 3-million names. He uses that list aggressively to raise funds and build support for many viable candidates. Through his PAC, Keeping America's Promise, Kerry's raised more than $2 million for the upcoming mid-terms. Another new email seeks support and money for Tim Walz, who's running in Minnesota's 1st District seat, and Jay Fawcett, the only Democrat seeking retiring Rep. Joel Hefley's (R) open seat in Colorado's 5th District.

The apparent motivation for the trio's fundraising plan links back to the early 70's when Kerry and Cleland entered politics after returning from Vietnam frustrated and disillusioned with the Nixon administration's polarization of the military and its attempt to divide soldiers along party lines. To prevent that from happening with Iraq war vets, they plan to raise $500,000 for a "Fight Back Fund." Said Kerry: "Karl Rove's gonna come after these kids hard. It's Richard Nixon all over again. We're gonna make sure these vets have the ammunition to shoot back."
Posted by The Ostroy Report at 10:26 AM

Kerry's a loser. He couldn't beat the "war" president? He didn't stand and fight in Ohio and he didn't even spend all the money he raised. What was he saving it for, a rainy day? Screw him and all the other bozo Dem's in Washington. It's time for new leadership. Now!!!

Tom, who are you backing that will beat Bush and the Republicans?

A bit OT: Do you suppose the MSM deliberately sunk Howard Dean's primary campaign by showing the "Dean Scream" ad nauseam because the GOP preferred to run against Kerry for whom they had their "swift-boating" well planned?

Right now the only Democrat I would back is Gore. He sucked in 2000, but he's talking the talk now. No other is standing up the the bastards like he is. It sure ain't Hillary. If she's the nominee, I'm voting for Bush, whether he's on the ballot or not. I think he will be.

It's pretty obvious that the Washington insiders, people like Begala, Carville, Shrom, Brazile etc. (the scum sucking leaches), that are always on the talking head shows, along with the corporate media did in Dean. These clowns have made a business running the Democrats into the ground. It's how they make money and they make it win or lose. I'd like to find out how much money they make, I bet it's large. I wouldn't be surprised if they get paid by the Republicans if they guy they are advising loses. Dirtbags!

That's what I think.

Gore sure stood up to the Saudis a few weeks ago didn't he? That speech nuked any chance he might have had for the presidency.

It's gonna have to be someone from the south that the Slack jaws can Identify with. The media can say what they want about Clinton, but she won't get the nod as they know ( the Dem party) they will lose and there is not a single American that doesn't have a firm opinion about her. That’s why Rove is making all the noise about her, as it would be an easy victory in 08 if she is the Dems pick. I liked Bill, but I don't trust her and wouldn't vote for her. She is 100% unbridled ambition and even the mentally deficient of the Deep South can see through her facade.

Keep your eye on Roberts. Kerry blew it as the candidate,but I think he may have a shot.

But McCain will be hard to beat..hell, even I like him and have ever since 2000.

Interesting,reading your comments i half to laught, knowing that any one of them you mentioned are nothing but crinimals and would be better off in jail for what they have already done along with their party leaders which have run crinimals to my knowledge. for a fast buck.and all the donations they can get.I will never donate.05{cents to either party.Looks like they need to do like they talked about Iraq.set up 6 new parties, or just let them run on their own money and let the richest crook get in. If we even get the chance to vote Im looking for people in the little parties like perro,Young Regan,Georg Stephenopolis. Wralph Nadoror Willy Nelson some old farmers,Maybe we get a good one.Ive had enought of this political crap from the tv

All_I_Can_Stands said...
Gore sure stood up to the Saudis a few weeks ago didn't he? That speech nuked any chance he might have had for the presidency.


Hey Stands, perhaps if Bush had originally stood up this way to the UAE over the ports deal he would've been spared all this embarassement and his latest poll numbers would not be in the toilet. My friend, I think in retrospect, many people view Gore's position on Saudi Arabia quite respectfully. If not, then this whole furor over Dubai Ports World is hypocritical.

Kerry can say all he wants, but with Emanuel and the DLC discouraging and outright running vets off the ticket, it matters little.

Sure it would be a smart move to have vets run, but the Dems need to get their heads out of their asses and get consistent.

Geez, what am I saying?