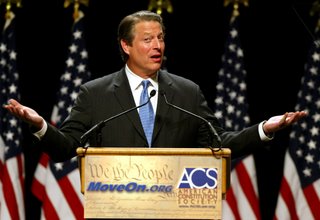 Controversial Virginia Democrat Rep. Jim Moran has said that former veep Al Gore should run for president in 2008. "I'd like to see him get into the race. He won the popular vote in 2000, and I think he's even stronger and more committed. But you know, he's got his own life and it's his decision to make." Moran made his comments recently on C-SPAN's Washington Journal.

While we on this blog couldn't agree more with Moran, the 8-term congressman is no bastion of credibility and respectability. He was one of 31 House Democrats to vote with Republicans to conduct impeachment hearings on Bill Clinton over the Monica Lewinsky scandal. He's also been scrutinized for pushing for the bankruptcy reform bill after a major credit card issuer gave him a large home equity loan. Moran also supported CAFTA; and was skewered for his pre-war comments in 2003 that "If it were not for the strong support of the Jewish community for this war with Iraq, we would not be doing this. The leaders of the Jewish community are influential enough that they could change the direction of where this is going, and I think they should."

And for the "I shit you not" file, Moran once famously duked it out with indicted former Congressman Duke Cunningham outside of the Capitol building and had to be separated by Capitol Police.

As we've said countless times on this blog, Gore is the best, most electable candidate the Democrats have. His major appeal stems from his impressive resume and White House experience; his successful economic track-record; his pro-environment position; and his early opposition to the Iraq war. He did win the popular vote in 2000 when America was a much different place, coming off of terrific prosperity and relative peace throughout the world. And, he'd be sitting in the Oval Office right now had it not been for the political chicanery of the Jeb Bush Gang and the Supreme Court.

Gore's been front and center on the speaking circuit, and has been the most vocal, outspoken and passionate critic of the Busheviks. In 2006's age of war, economic turmoil, global warming, natural disaster, and political cronyism and corruption, Gore's message resonates.

He's recently reaffirmed that he's not entering the race, though many in and outside the Beltway believe he's likely running, instead waiting for a groundswell of grassroots/'netroots support before officially declaring his candidacy. He recently joked in Florida that he's "a recovering politician." Let's just hope he doesn't take too long to recover.
Posted by The Ostroy Report at 3:08 PM

I voted for Nader the last 2 elections, but if Gore keeps talking the way he has been, he's got my vote.

It's those that voted for Nader in the last two elections that have helped put Bush in office.

Both elections were very close, we ALL knew that and to vote for Ralph was a vote for Bush.

I guess you weren't paying attention the last 2 elections. Gore did win in 2000 and Kerry most likely won in 2004. They didn't stand up and fight for it. That's why neither one is President.

The fact remains Tom that those that voted for Nader, in protest of who knows what cost the Democrats in both elections. Common sense will tell any voters in a close election to not only vote but to vote wisely.

Sorry mate, Gore and Kerry did fight but the Nader voters gave up on their beliefs. We would have thought you all would have learned by the 2000 election, yet you did it again in 2004.

All that was proven by the Nader voters was that you all trying to prove a point got us 8 years of Bush.

what would it have meant to this country had the people who voted for "anyone but Bush" stood together and voted for someone. Maybe even an actual leader, not a fellow bonesman like Kerry, or a quitter like Gore. How bad did that guy let this country down?

Nader was no doubt in my mind the BEST vote I could have ever made. If only people like Moore, and Maher could have backed Nader, in '04, perhaps that could have made a difference, send the REAL message, we NEED more OPTIONS! the two party system is a big part of the problems we have.

Al Gore is my guy. I first heard him speak in 1988. He's been my guy ever since. No one compares to him. We don't need a third party. We need President Gore.

To those who voted for Nader: here is a guy with almost no political experience, the demeanor of a disgruntled accountant and literally no chance of even coming close to winning the presidency...and you bozos voted for him! Everyone who voted for Nader really voted for Bush and for that, I have ZERO respect for them. When it's do-or-die, you don't stand on your platform of righteousness and back a guaranteed loser; you vote for the lesser of two evils. If the votes for Nader had went to Gore in Florida, we wouldn't be stuck with Murder, Cheat & Lie Inc. as America's executive branch.
Not only was Gore the lesser of two evils, he was a far more competent and experienced candidate then Nader the Traitor.

If Jim "I'll earmark the shit out of it" Moran says he should run, then he definitely should not. Jim Moran's my Congressman, and I'm embarrassed by him. This coming from a man who's never voted for a Republican in his life. Last time I couldn't bring myself to vote for Moran; this time I will surely vote against him.