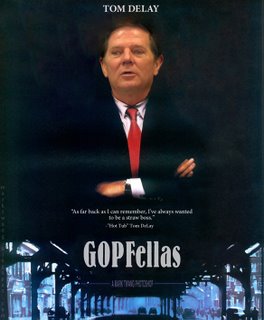 Nick Lampson wants Tom DeLay's job representing Texas's 22nd Congressional District. He wants it bad. Especially since he lost his House seat as a result of The Hammer's 2004 redistricting scheme. He's been gaining serious momentum and leads the polls. DeLay's announcement this week that he's dropping out of the race and resigning from Congress in June only enhances Lampson's chances at winning. And that makes many ReTHUGlicans very, very angry. They showed that anger Thursday by disrupting a press conference Lampson held on the steps of the Sugar Land city hall. The city is DeLay's hometown.

In calling on Tom DeLay to immediately resign so a May 13th special election can be held to fill his seat, Lampson's words were drowned out by demonstrators reminiscent of the dozens of screaming, bullying GOP thugs who converged on Miami/Dade election headquarters during the 2000 recount. People were pushed, shoved and shouted at. Lampson and his supporters were surrounded by these bullies, who held up hand-written signs that read "Liberal Lampson," "I Stand with Tom DeLay" and "Go Lose Somewhere Else."

In an email sent to supporters, Lampson's campaign manager Mike Malaise said that "DeLay's goons showed up to harass, assault, and intimidate. A number of female Lampson supporters, including Marsha Rovai, a 69 year-old woman from Richmond, reported being pushed and shoved by belligerent DeLay goons at the event."

"I can't believe my Congressman, Tom DeLay, would organize this type of assault," said Ms. Rovai. "I was assaulted by two different people. One of the men hit me and another shoved his sign into my face, and then when I pushed his sign away he violently pulled my hat down over my eyes and pushed me. I'm considering filing an assault charge. This is just very upsetting and I'm so disappointed in Tom Delay for organizing this attack."

The disruption was well-orchestrated: "Let's give Lampson a parting shot that wrecks his press conference," read a mass e-mail to supporters by DeLay campaign manager Chris Homan. He promised more agressive protests. "Mr. Lampson is going to have to get used to being confronted about his voting record the next seven months."

"This incident certainly shows that Tom DeLay continues to try and intimidate the people of this district from speaking out against his unethical activity," Malaise said.

Take notice, Democrats. This is just the beginning of the type of brutish intimidation and devious acts the ReTHUGlicans will resort to in order to hold onto power. Fasten your seat belts, it's going to be a bumpy ride.
Posted by The Ostroy Report at 9:51 PM

Unfortuately it would have been better to run against Delay than some swift boat guy.

I sure hope Lampson still has a chance.

Michigan: It's not our fault. Auto workers gave up a lot in lean times and were given benefits (health care for one) to make up for pay raises. If GM goes down the whole country will suffer. The middle class is fast disapearing. Don't blame the workers.

Cathy I love you gal but when it comes to the problems at GM and Ford a lot can fall back to the workers. In 1993 the Clintons were trying to get a national health care program in place and what happened, they were shot down. In 1994 the Republicans gained the house and the senate and that was the end of health care. Now think of this, if those very same GM and Ford works had voted the right way in 94 we’d have a program that would have taken care of not only these workers but ALL workers and these companies would not have to be shelling out for health care. Until we get to be like EVERY OTHER democratic country (even China has health care) we are going to continue having major companies go under because of this major problem.

The people of this country just do not get it and I don’t think they ever will. Finally, the state of Massachusetts is doing something for health care for all of it’s people. We had better make this a number one voting item or we all will be in major trouble heath wise.

As a side bar, I have always been a Ford man until 1999 when I bought a new Camry, then in 2004 I bought a Toyota Prius the only real true FULL hybrid. I am getting an honest 55.6 mpg constantly and have hit a high of 63.6 mpg. While GM and Ford are “thinking” of building a FULL hybrid, Toyota took it on their own to do it back in 1997. Detroit was more concerned about making big bucks off their SUVs rather than looking into the future and now it’s biting them in the butt. Detroit only needs to look in the mirror to see who is to blame.

It better not be a bumpy ride.

In November, the Republican candiate for governor of Virginia tried a swiftboat attack on the Democrat. He claimed the Democrat would pardon Hitler.

Of course, the new governor of Virginia is Kaine (D).

The voters are fed up with the thugish behavior of the Republicans. If there is a bumpy ride, it will be theirs, not the Democrats.

I was not aware of the who the democratic challanger for the DeLay Congressioanl Seat was as I'm not from Texas. I'm GLAD this story ran so I'll know to SEND a NICE donation to Mr Nick Lampson NOW!

tom delay is the ultimate scum bag.the politicians in dc make me want to puke daily,they have totally lost all touch with the people.just read the history of the end of the roman empire,and you will know what is happening to america today.

Hell don't just talk about taking legal action, DO IT!

Too bad a lot of the sheeple who are suffering under Tom Delay and his ilk voted straight Repuglican...and they will again, I'm afraid. Sheeple vote wedge issues and thereby vote against themselves. I can't understand any working person voting for a repuglican.