Kerry's Brilliant New Proposal: Let's Give Iraqis Until May 15 and the Busheviks Until May 16 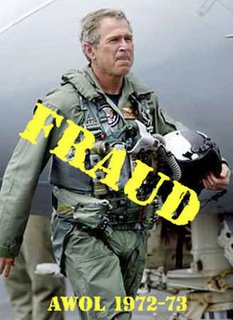 Things could not be worse for President Bush. Iraq is imploding, he's just been fingered as the Iraq intelligence leaker, and his poll numbers have sunk to even lower lows. Can you say, worst president in U.S. history?

Sen. John Kerry (D-MA) has come up with the perfect solution. Earlier in the week he wrote in a NY Times op-ed piece that the United States must give the Iraqis a deadline to form a government or we'll pull our troops. He took that proposal another major step Friday morning. Speaking on Don Imus' radio program, Kerry said, "I really wanted to say, let's give the Iraqis until May 15 to form a functioning government, and give the Bush administration until May 16." Brilliant, just brilliant! If only we could act on this.

The bad news for Bush just keeps piling on. A new AP/Ipsos poll has his approval rating at a new low of 36%. But it gets even uglier. The Bushies have lost their national security edge, which they've heretofore clung to for their political survival. Only 40% approve of his performance on foreign policy and the war on terror, and just 35% approve of his Iraq war handling. Both of these numbers are new lows as well.

"These numbers are scary. We've lost every advantage we've ever had," GOP pollster Tony Fabrizio said.

And if that wasn't enough, the mainstream media is finally starting to do its job, reporting today with prominent front-page stories in both the NY Times and Washington Post that Bush authorized former Cheney chief of staff Scooter Libby to leak parts of a classified pre-war intelligence estimate on Iraq.

Yes, President George "Leak-Hater" Bush, who's boldly declared in the past that, "If there is a leak out of my administration, I want to know who it is and if the person has violated the law, the person will be taken care of...If someone committed a crime, they will no longer work in my administration," is himself the highest leaker in the land. Why are we not surprised?

More lies, more deception, more crimes committed. Every week this dreadful, miserable failure of a president drags down America's honor. Can we really stand 2 1/2 more years of this? Both of Kerry's deadlines deserve some very serious consideration.
Posted by The Ostroy Report at 8:06 AM

But he is POTUS and can do what he wants!! He better, f*cking better fry for this!

As for Kerry, I was happy to see him come out and say this. I saw part of it on Hardball and loved his comment that "they won't listen to me, but they would listen to the President of the United States" - but I'm sure May 15 just is just to quick for these punks.

I don't mean to be rude: Anybody who considers Kerry as an honest Agent working in good faith is sadly mistaken.

Specifically, if someone is not talking about getting the truth of 9/11 right now, it is doubtful they care about the America we all believe in.

It's too bad that Bush has the right to release classifed info, but will it matter that he lied about doing so? Or that he only did it to descredit the opposition?

Does anyone know if the "safe Repub" seats are in play now?

I too heard Kerry on Hardball and on Imus but after reading the comments on The Huffington Post yesterday about Kerry and Cleland you’ll find a lot of rumbling going on from us grass root Democrats. Yes, I worked for Kerry but I knew we were sunk when he was asked at the rim of the Grand Canyon during the campaign knowing what he knew now would he still vote for the invasion of Iraq, and he said YES he would. Right then and there he feel for the Bush trap and he was doomed.

It has been said last year already, that in the 2008 election the ONLY person that will win is one that did not vote for this war, that does not mean someone that has “changed” his/her mind now. Any of the ones thinking of running that voted for this screw up will not get elected. So who does this leave for the Democrats, Gore and Feingold and that my friends is what the 2008 ticket will look like. Yes Gore wasn’t tough enough in 2000 but listen to him now and you will hear a fight in his voice that we have not heard since Howard Dean.

BG said...
I don't mean to be rude: Anybody who considers Kerry as an honest Agent working in good faith is sadly mistaken.

Oh great. Another self-loathing Democrat apologist who'd rather bury his head up his ass with 4 year old 9/11 conspiracies than focus on winning back the House, Senate and presidency. No wonder we can never win an election.
Marty

Concerning 9/11 theories. There are a lot of crackpot theories out there. Below is a link to a Popular Mechanics article which offers several pieces aimed at debunking some of the more nutty theories.
http://www.popularmechanics.com/science/defense/1227842.html?page=9&c=y

That Popular Mechanics article is one of the more nutty conspiracy theories. And the wildest conspiracy theory of all is the one the government told us, which too many still, apparently, believe.

Kerry beat Bush in the debates and at the polls. Then he betrayed millions of hard working Democrats who believed him when he said he would count all thhe votes. He won Ohio, but didn't fight for the votes.

Then he kept about eight million dollars of our hard earned money for his supposed 08 campaign.,

He didn't back Murtha last year, and he doesn't back Feingold's censure.

His latest proposal is a pathetic attempt to read the popular disgust with Bush and the war- no leader here, no courage, no good ideas.

Get behind Murtha, Feingold and Dean.

And give back the campaign money that the working Demcrats thought you would use to WIN.