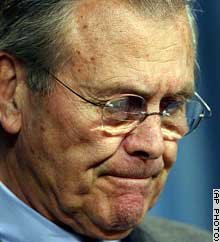 A chorus of retired generals have come forward this past week to sharply criticize Defense Secretary Donald Rumsfeld and call for his resignation. They are united in their belief that he's unfit to lead the nation's military forces as the United States seeks to extricate itself from the Iraq war. Rummy and President Bush are inextricably tied to this quagmire, and the war itself is inextricably tied to Bush's legacy as president. Rumsfeld symbolizes the war and the war is how history will judge Bush. To fire Rumsfeld is an admission of failure in Iraq.

Bush is not one to readily accept blame or acknowledge mistakes, and on something so central to his presidency as Iraq, he is not about to start now. What we will continue to get is more of the same spin and delusional rhetoric as before: "the war was justified...everything's going great...there's tremendous progress in Iraq...and Rummy and me are the brilliant masterminds of this obvious military success." And this message could not be more evident than on the airwaves of the Busheviks' loyal conservative radio and TV spinheads, who have embarked on a ludicrous campaign of character assassination of the highest-ranking military commanders in the land. Not surprising.

The generals, seven in total so far, include two former commanders of Army divisions in Iraq--Maj. Gen. Charles H. Swannack Jr and Maj. Gen. John Batiste--and another who trained the Iraqi forces, Maj. Gen. Paul D. Eaton. The others are Gen. Anthony Zinni, a frequent and outspoken critic of Rummy and the Busheviks; former presidential candidate Gen. Wesley Clark; Lt. Gen. Gregory Newbold, former director of operations for the Joint Chiefs of staff; and Maj. Gen. John Riggs. And it's not just the retirees. Newbold wrote an essay in Time Magazine in which he said he was encouraged to speak out by current high-ranking officers in the military. By law, active-duty officers are prohibited from speaking out against the civilian military leadership. No matter what the ReTHUGlicans say, the characters of these generals is unassailable. That's what makes their criticisms so meaningful.

The generals' main beef? That Rumsfeld is an arrogant, bullying micromanager who grossly miscalculated strategy in Iraq while ignoring and/or discounting the advice of the military commanders on the ground. Even one of his staunchest supporters, retired Marine Lt. Gen. Michael DeLong, in a NY Times op-ed Sunday, admitted Rumsfeld is a micromanager who wanted to be involved in all decisions. As such, several of his strategic decisions have come under intense scrutiny from the generals. First, Rummy's "modern war" premise grossly underestimated the level of troops needed despite strong opposition from Gen. Eric Shinseki, who was later booted from his post for stating that hundreds of thousands of soldiers were needed to maintain order post-invasion. Furthermore, it was Rumsfeld who decided to cancel the deployment of the First Cavalry Division, which would've bolstered the initial invasion force and helped stave off the mounting insurgency. And perhaps the biggest blunder was Rumsfeld's unilateral decision to dissolve the Iraqi military without consulting the Joint Chiefs.

Now while the prevailing political logic would have Bush canning Rumsfeld to at least create some specter of accountability and thus improve the Republicans' chances in the November midterms, Rumsfeld's ouster is simply not going to happen. And while he likely did not intend his words to be construed this way, most profound is the statement made by Texas Senator John Cornyn that Rummy's resignation would be a mistake: "If this were to happen, it would encourage demands for other members of the cabinet or other people close to the president to resign." Given the abysmal performance of the Busheviks, just what the hell would be so wrong with that?
Posted by The Ostroy Report at 4:52 PM

Bush will not ask for Rummy to resign because he thinks he cannot afford to. Bush is the commander in chief and if he fires Rummy he will look like he takes orders from retired generals. Any other president would have the self confidence to look at what the generals are saying and if they are right make adjustments. Bush takes advice from no one but Cheney and Rummy. Bush doesn't have the self confidence to admit a mistake and move on. He's backed into a corner by the generals. If he fires Rummy then he thinks he will no longer be the commander in chief, the presidency itself will be in danger and his legacy will be in tatters. If he doesn't listen to these well seasoned veterans and fire Rummy, he looks like an idiot. It will be interesting to see what will happen next.

In agreement to the above comment, Bush is in a box. However, his pResidency is already in tatters and his decisions are idiotic. Rummy is just another poster boy for Bush's incompetency. The real challenge is for americans to let congress know they want action from the legislative branch to take care of the country. It's beyond obvious that BushCo. is incapable of that one task.

Ah, but BushCo has a "strategery": The Battle for Baghdad.

Reportedly, BushCo is finalizing war plans to "takeback" Baghdad. This "policing action" will definitely occur before the November elections, and will presumably show how competent the BushCo war planners are versus all the incompetence they have displayed up to now.

But, you see, there is a side issue that could make the U.S./Iraqi Army attack on Baghdad very, very bloody. If, before the assault, either the U.S. (or Israel) decides to take-out the suspected Iranian nuclear sites, then any coalition forces in Baghdad (or anywhere in Iraq) will be facing swarms of Iranian suicide bombers...making the job of the "re-liberators" of Baghdad that much more difficult and deadly.

So, while it is commendable that BushCo and Rumsfeld are finally going to finish the job securing Baghdad, a job they screwed up so badly in 2003, our soldiers and those in the Iraqi Army who aren't Shiite religious fundamentalist terrorists backed by Iran, will face a very, very hard task.

I will be very surprised if BushCo can pull this off. But you see they have to at least try, not only to prove they can do something right for a change, but also to secure the area in Baghdad around the new American embassy being built. This new embassy is viewed by BushCo as just one of many military/political outposts being placed inside Iraq to support the long-term occupat...er, presence of the United States in Iraq.

However, the level of bloodshed that we are about to witness in that region still calls into question why BushCo attacked Iraq, instead of keeping our forces focused on the Taliban/Al Qaeda 9/11 terrorist supporters over in Afghanistan.

In other words, for BushCo to salvage anything out of the mess they've made, they must make even more of a mess.

I weep for all the Iraqis, especially those who thought the deposing of Saddam Hussein, based on the false promises of BushCo, would lead to a free and democratic society. Unfortunately, the central and southern parts of Iraq appear headed toward becoming a religious terrorist colony of Iran, controlled by Iran's hardcore, right-wing religious fundamentalists (with the help of Iraq's Shiite religious terrorist sympathizer, Ayatollah Sistani). These religious nuts, similar to al Qaeda religious nuts, are a thousand times more bloodthirsty than Saddam Hussein ever was. And this is what BushCo has bequeathed to Iraq's citizens and their children.

this was rummy`s plan and it failed miserably,the generals are pissed because civilians don`t do war plans,except in this case they did and the military went along for fear of losing their careers.there will be some time before the military will be back to normal and it will cost a half a trillion..peace,kent

Hell, I think it's much more sinister than what's been mentioned.

Rummy has the "goods" on Bush & Company about the lead-up to war.

If you remember, he's already stated he never told Bush whether or not it was a good idea to invade Iraq. That decision was Cheney's and the cabal of neocons.

So Rummy leaves when he's darn good and ready; or at least until after the fall elections.

The puppet cannot fire the puppeteer.

Only when all-out civil war blossoms in Iraq will the United States public develop the political will to bring home the troops.

Indeed, why resign? Becuase bush&co. have achieved exactly what they wanted. They don't want a stabile Iraq. Otherwise we'd have no reason to have our troops there. All you have to do is listen to what bushits say to hear and see this, bush; "We'll stand down when the Iraqi's stand up." It should be obvious that he doesn't want the Iraqi's to do anything but remain in a state of chaos, because if you look at the policies they've all been directed to create chaos. These aren't "failed" or "incompetent" policies, they're want bush&co. wanted.