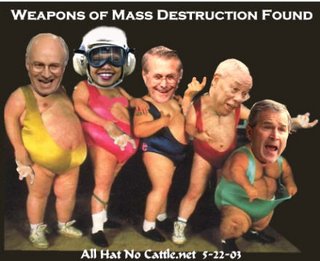 News from The Center for Disease Control and Prevention is circulating the 'Net Friday stating that the Republican Party has contracted a new virulent strain of a
sexually transmitted disease called Gonorrhea Lectim (pronounced "gonna re-elect him)", which is contracted through dangerous and high risk partisan greed, cronyism and corruption. Several GOP leaders previously or currently running for re-election have been politically crippled by this debilitating condition, including Tom DeLay, Bob Ney, Rick Santorum, John Boehner and Duke Cunningham. Other high-ranking ReTHUGlicans including Bush, Cheney, Rumsfeld and Rice seem to have contracted a version of the dreaded illness as well.

Cognitive characteristics of individuals infected include:

Naturalists and epidemiologists are amazed at how this
destructive disease originated only a few years ago
from a bush found in Texas.
Posted by The Ostroy Report at 11:07 AM