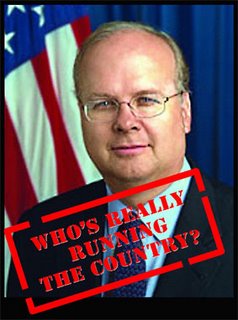 With the announcement Wednesday that "Bush's Brain" Karl Rove has been stripped of his coveted policy post to focus on electoral politics comes the key question, is this really a demotion? Don't kid yourself.

Rove is the most brilliant, manipulative and devious political operative in modern history. This is no demotion at all, rather than a highly calculated effort by the ReTHUGlican leadership to fully unleash on the election landscape the most ruthless campaign manager of all time. With Bush and Cheney's poll numbers in the proverbial toilet, and with the GOP desperately trying to salvage its base and maintain control of the House and Senate, the Repugs have shifted into high gear. The only thing they've stripped Turd Blossom of is any distraction that'll get in the way of his delivering yet another decisive win. And that's a scary thought for Democrats.

Rove has a history of playing dirty. Real dirty. As dirty as it takes to win. His career highlights:

1-In 1970, 19-year-old Rove snuck into the office of Illinois Democrat Alan Dixon, stole sheets of letterhead, and then printed up 1,000 party invitations promising "free beer, free food, girls and a good time for nothing," which he then distributed to homeless shelters.

3-In 1973 Rove became chairman of the college Republicans when George Herbert Walker Bush was chairman of the Texas Republican Party. Rove also learned the tricks of his trade early on from Lee Atwater, who managed Rove's college campaign and went on to become the attack dog for the Reagan/Bush team. Bush 41 later hired Rove to run his failed 1980 presidential campaign, and he's been working with Bush Jr. since his 1993 Texas gubernatorial run.

4-Smeared many of his clients' opponents--such Paul Wellstone, Tom Harkin and former Texas Governor Mark White. In the latter case in 1986, White ran against Rove's client Bill Clements, a Republican. Prior to a highly anticipated debate between the two candidates, Rove called the media to report that his office had been bugged, claiming, without proof, that it was the White camp who was responsible. The story distracted attention from the debates, Clements won, and Rove's political capital soared. However, the police ultimately determined that it was Rove himself who most likely planted the bug.

5-Using emails and anonymous flyers, Rove smeared John McCain in the 2000 presidential election over his war record, that he was mentally unstable, that his wife was a drug addict, and that he had fathered an illegitimate black child.

6-Smeared Al Gore in the 2000 campaign by ridiculing the veep by playing the "invented the internet" card.

7-Smeared John Kerry in the 2004 presidential election mainly through the vicious "Swift Boat" attacks on his war record.

8-Oversaw the voting irregularities and voter intimidation tactics in both the 2000 and 2004 campaigns. Masterminded the infamous "Brooks Brothers riot" of 2000, where ReTHUGlicans from out-of-state waved fists, chanted "Stop the fraud!" and pounded windows to intimidate officials in the Florida recount effort.

9-Masterminded the nationwide "gay-marriage" amendment campaign to assure that the GOP's "values" base went to the polls.

10-Coordinated and commanded the false WMD, Niger Uranium and biolabs claims, as well as the overall Saddam/Al Qaeda connection rhetoric.

In short, Rove is a bad dude. He will do everything in his power, and then some, to get his clients elected and keep them in power. That he is now 100% dedicated to the ReTHUGlicans' re-election efforts this November is by no means a demotion, a reduction of his power, or an action that should be taken by the Democrats as anything but downright frightening. This is a wake-up call to the left. The enemy has just moved its most powerful weapon straight to the front lines.
Posted by The Ostroy Report at 8:26 AM

Rove's shift in position may have something to do w/ this....

The grand jury session yesterday in federal court in Washington, DC, sources close to the case said, was the first time this year that Special Prosecutor Fitzgerald told the jurors that he would soon present them with a list of criminal charges he intends to file against Karl Rove in hopes of having the grand jury return a multi-count indictment. In an interview with Jason Leopold on Wednesday, Rove's attorney, Robert Luskin, confirmed that Rove remains a "subject" of Fitzgerald's two-year-old probe....**

Rove could still run the country from jail if they provided him with a laptop or any visitation whatsoever. Andy is right, Rove is being given more time to go out there and continue running the machine. I wonder what would happen if Rove's reputation were in complete tatters and some smear showed up against some dem candidate. Would it be possible that all the dem would have to do is claim this is more of Rove's dirty work and the public would dismiss it as bad garbage? Ok, I can dream can't I?

I would never trust Repubs. My mother warned me about them with tales from the 1950s and 1960s.

Cathy
From the onces great State of Michigan with 6.8% unemployment

And nobody else trusts them either. Bush at 33% in the new Fox Poll. Yes, the FOX POLL.

Rove will work his black magic and the Dems will run or fold. And won't he have fun shredding Hillary. Things do not bode well.

Rove is subject to investigation by Fitzgerald. That is reason enough for Bush to want to distance his "administration" from Rove. Hopefully, with the charges that Fitzgerald may present, the ol' what goes around, comes around may finally bite Rove in his fat a$$. Remember, a few weeks ago people still thought DeLay was untouchable.

It's just starting to get good so stay tuned!

While I may not agree with his tactics, I admire what Rove has done for the Republican party. I don't think he is up to snuff with Atwater in that Lee helped design a plan with other GOP operatives to take over all of government by 2000, which is basically what happened.

Mr Rove is on his way out. Too bad we need Karl to kick around some more! The dirty tricks this man practiced will never be fully reconciled!