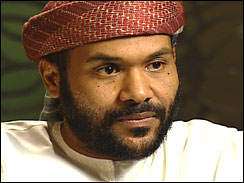 Osama bin Laden is alive, healthy and is planning another major strike inside the United States. So said his former chief bodyguard, Abu Jandal, in a segment of CBS's "60 Minutes" which aired Sunday. Jandal had served bin Laden in Afghanistan in the four years leading up to the 9/11 attacks.

Correspondent Bob Simon played for Abu Jandal the audiotape of bin Laden's January truce proposal ("stop attacking Muslims") in which he warned of more attacks if his offer was not accepted. "He made a similar proposal to the Europeans," said Abu Jandal. "He warned them and gave them six months. When there was no response, he started with the Madrid bombing, then London. So I believe Osama bin Laden is planning a new attack inside the United States. This is certain." Asked if he is sure Osama is preparing a new attack, Abu Jandal said, "When Sheikh Osama promises something, he does it."

Mike Scheuer, head of the bin Laden unit at the CIA, and who has been tracking and trying to kill bin Laden since the late 1990's, said Abu Jandal is a very credible source. "I do think he is who he says he is. What he says about events, people, al Qaeda, meshes very thoroughly with what we know, from both, from unclassified sources and from classified intelligence." Simon asked him how Abu Jandal compares, in terms of providing valuable information, to the prisoners currently being held in Guantanamo. "Oh, I think he's probably far more important than anybody we've got in Guantanamo. Because he had direct exposure to Osama bin Laden. He’s very, very knowledgeable about the organization worldwide," Scheuer replied.

The threat of a new attack is chilling enough. But the 60 Minutes piece ended on an even more chilling note, one that's illustrative of the magnitude of the hatred towards America in that part of the world. The segment showed Abu Jandal's son Habib, no more than five or six years old. A handsome, intelligent, charming boy who dreams of being an engineer when he grows up. But his father has another goal for him. "I have great hopes for him and pray to God that he will finish what his father was not able to finish. I pray that he will become a martyr. Frankly, I hope that my son gets killed and becomes a martyr for the sake of God Almighty."

How on earth are we to successfully fight, and defeat, and enemy that has absolutely no regard for human life, even for that of its children?
Posted by The Ostroy Report at 9:46 AM

Sounds like another act to divert attention dirrect from the White House.

Your tough talking inarticulate pal in the WH has been telling us since 911 that he was gonna get Bin Laden and he hasn’t done squat. Hell, I’d be happy if he could find those WMD’s in Iraq that he and his admin swore were there.

As far as the broadband, I would believe that more than those MILLIONS of good paying jobs that BUSH and the GOP promised to get those tax cuts. Let alone all that CHEAP GAS that we were gonna get if we went to war with Iraq.

What are you gonna do keep believing a President that has been proved to be wrong a lot of the time and an out right liar or give someone else a try.

Say what you want, but when Slick Willy was calling the shots EVERYONE was making money not just Halliburton and the well connected.

You wanna hear good news about the economy and Iraq go listen to Fox News.


that maybe but your Pal Bush was still AWOL and Cheney was a draft Dodger.

We will never defeat an enemy such as this unless we can give the people that do jihad some kind of hope for the future.
If they beleieved that a good life for them and their families was possible they would work for that. Instead they believe what they perceive to be true, that the US and the west are anti Islam.
They see these idiotic PR campaigns by Karen Hughes and all the rest, creates more jihdists. They see us supporting despotic corrupt regimes in Muslim countries, exploiting their oil and our soldiers totally ignorant of their languages and customs and treating them in what they see as an insulting and shocking manner...creates more jihadists!
An admisitration as corrupt and incompetent as the Bush bunch, well that makes us our own worst enemy.

Au contrire - what US Americans consider human life, perhaps Islamists consider just a shell, an empty vessel, that we fill with unhealthy food, negative stereotypes of any people that don't look like the founders of the USA; comsumption is our moive for evrything. While Bush is directly responsible for killing US Americans and Iraqi's and wasting billions of USA dollars and metyerile and other asets, Congress actullay held hearings on steriod usage in basbeal. Agmae for goodness sakes, pleyd by millionreas and a league composed of multil miilionairtes and billionaires. Before scoffing at another, look in the mirrio. The USA has commited war crimes, it has viloted not only it's onw consitution daily, but has viloted any number of international treaties to hich we are signatores. The USA Congrees is wirhtless, the worst COngress money can buy, oops, that;s right, the business world has gotten theri money;s eworht, but certaiunly not the people of the USA. We have no morals, no consicense, no ability to foucs on anything but our own immediate gratifcation. The $270 billion we've spent in IRAQ could build and equip many new urban schools in the USA which would produce far greater benefits in the short and long-term than the Iraq slaughter and occupation will never produce.

I truly believe we are on the verge of an even bigger catastrophe thantaht which is onging in Iraq now. And no one in the USA will escape its ramifications.