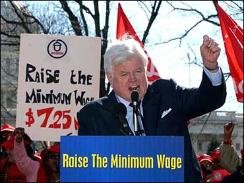 What do GOP Senators Bill Frist (TN), John Sununu (NH), Orrin Hatch (UT), Tom Coburn (OK), Kay Bailey Hutchison (TX), Rick Santorum (PA), John Thune and many others have in common? They've all voted to keep the Unites States minimum wage at the shamefully oppressive $5.15 per hour, the level it's been since 1997. They are also part of the growing chorus of Republicans who are decrying the illegal/legal immigration issue on the grounds that it drives down wages for poor Americans. Here's a little suggestion, Republicans: if you care so much about how much the little guy takes home, how about voting to increase the minimum wage? How about you stop defeating the Democrats' proposals to raise them? The hypocrisy in your position is mind-numbing.

Last year bills by Democrats were brought before the Senate, and in both cases the Republicans voted against raising the minimum. Yet these very same Senators, who earn $162,100 per year, have voted themselves eight pay raises totalling $31,600 since '97 while minimum wage workers still earn only $10,700 a year. They also get upwards of $2-million, depending on the population of their home state, to cover health and life insurance, pensions, office supplies and expenses, travel, telecommunications and mass mailings. But these elitist Republicans, many of whom were born on 3rd base and think they've hit a triple, repeatedly shoot down Democrats' proposals to put another buck or two per hour into the hands of Mr. & Mrs. Working Stiff. What balls.

Here's the real shame: at the current $5.15 level, a full-time, year-round worker with one-child earns about $5,400 less than the $16,000 needed to stay above the poverty level. Health care coverage alone exceeds this amount.

In defense of their stinginess, Republicans have created their own economic rationale.

"When you raise the minimum wage you are pricing some workers out of the market," said Sen. John Sununu (R-N.H.).

On Santorum, Sen. Ted Kennedy (D-MA) said, "The senator from Pennsylvania has a record of opposing increases in the minimum wage. He has voted against it at least 17 times in the last 10 years."

If Republicans in the Senate truly care about the wages of the poor, then they should raise the minimum wage to a meaningful level and stop hiding behind the inane supposition that immigration keeps wages down. Senate Republicans are what's keeping wages down.
Posted by The Ostroy Report at 4:36 PM

Another way to look at is: the illegal immigrants make ten to twelve dollars an hour FREE money (no deductions) picking strawberries. During the Depression migrant American workers traveled to where the jobs were to earn a living (re-read GRAPES OF WRATH). Today poor American workers don't have/can't afford a car to make the trip to CA, or anywhere else to work seasonally. In the state I live in work is scarce and the wages are usually minimum. I know these workers would flock to farms to pick crops if they could afford a car and gas or had any means of transportation. (They certainly couldn't afford to live in CA. permanently.) It appears the Republicans don't like American workers and wish to keep them hungry. It sometimes seems Republicans don't like America.

Dear God, If you really love Utah, please make Orrin Hatch go away. As you know, it takes two incomes here to afford a two bedroom apartment. Waiters and waitresses only make like 2.50 an hour and have to rely on tips to pay the utilities. While Utah is the most republican state in the union, it also has one of the highest prescription drug abuse rates and bankruptcy rates in the United States. There's only like 2.2 million people here, so it doesn't take a big mental stretch to see that it is a depressing place. Please let people who actually care for people run the state now. Orrin's made his bundle and so has "the church". Please give voters a boost in brain power when they go to the voting booths this fall and, please God, make it so the voting machines are correct and not corrupted. I know it's alot to ask. After all, you are God and In God We Trust....do this and we will ALL know you do exist.

Andy - thanks for the numbers. I knew it was a bit twisted with minimum wage not changing, but damn.

here's the real skinney on why the repugs are bringing up the immigration issue now. they were hoping to use it as a wedge issue to pit poor whites against poor latinos and to take the focus for the lousy economy off of them. according to them the reason wages are so low is because the immigrants are driving down wages not because of the minimum wage.the fact that they dropped it to go home is proof that they miscalcuted the effect or perhaps they never really intended to pass it in the first place. instead they have aroused angry latinos who blame them. everything with them is politics. they are the worst kind of demogogues.

Minimum wage isn't the answer to solving the problems with the poor. It's not even a band aid.
It's a bad case of "trickle up" economics. The assumption that if we raise minimum wage, then people will have more money to spend.
We need to solve the problem with education and creating a technically advanced workforce and either export thier expertise while mainting economic ties to the US or bringing technology work back into the US.
Minimum wage arguments are useless and not the issue.
By the way.... Didn't the Democrats also vote for thier wage increase? Hmmmm.... Hypocracy seems to be the food of politics.

Anonymous writes: "Minimum wage isn't the answer to solving the problems with the poor. It's not even a band aid."

Oh really? And just what do you do for a living, and how many raises have youyou gotten in the past 10 years? Thanks for presenting the typical Republican apathy and indifference when it comes to the working class. That anyone can even imply that someone making $5.15 an hour wouldn't benefit tremendously by another dollar two is beyond belief.

I worked my way up from having nothing, no job and no hope in California, on welfare because I had nothing, to making lower middle class wages on my own.
No degree, nothing but a desire to get out of finacial problems and the willingness to learn what I needed to learn to make it happen.
Sorry, but to solve the problem we need to train these people. Not just give them another dollar. Give them the ability to make thier time valuable to other people. Not another gift from the state.
I can't believe that you think 1 dollar would help.
BTW, not a republican.
Noticed you skipped the part about the Democrats voting for a pay raise.

Anon....While you're climb up is certainly admirable, you are going to have a real hard time convincing most sane people that a $1000 annual raise for someone making $10K per year is not huge. How on earth do you even begin to justify a $10K annual wage, especially when there's a family involved? Would you work for $10K/year? This amount is below poverty level. After ten years, and factoring in cost-of-living increases, don't these people deserve a raise? If you are not a Republican, then you are one heartless Democrat!

And with $1 an hour change that makes such a huge difference? You have obviously not been there.
I am not heartless, I try to solve the problem, not put a band aid on it. We solve these problems by giving people the tools to make thier lives better, not by giving them something for nothing.
Just to be clear, I'm not a democrat either. I have no use for either party since they both lie, cheat and steal with the same veracity.
And you still avoided the question of Democrat's voting for the pay raise.

I worked for minimum wage during the Nixon years while going to college - yes, my tuition was paid by my parents but any living expenses were paid by me. From living in a house (not a frat) with eight other people to counting pennies from a change jar to buy gas to get to work, to eating peanut butter the last week of every month AND I was only taking care of myself (not a family), I know what it was like to exist on minimum wage! My pay raises back them were huge to me even though they were often less than a dollar. I'm sure a buck an hour would seem the same way today! If it doesn't seem a big deal, you ain't been there!

But you are arguing that fixes the problem. And it doesn't. Not even close. $1 an hour does not pull them out of poverty. To be honest it barely helps.
We are talking about families that need to be on carreer paths, not some college student who needs another 8 $1 bills for strippers or beer. These people aren't going to college. They are trying to make it on thier own with nothing. Why don't the Dem's support tech schools and moving these people up from poverty instead of throwing them a bone?
My point to you, and my challenge is that if you want to make a difference in thier lives, then show them how to make thier time valuable and to use that. Not just take another handout from the state that does NOT fundementally change the state of thier life.
Give them dignity and the ability to provide for themselves.
But since Democrats are against personal responsibilty and for providing a "nanny state" I don't see that happening any time soon.

The premise is not a handout in this article - it's about reality... that inflation has eaten minimum wage to actually be a dollar less than thought. The challenge, while well intended, does not take in account that many are at this income level because they don't perceive themselves as educable. Many have personal issues - addictions, family histories, self esteem issues, educational difficulties, etc., that prevent them from increasing their "self worth". How do I know? I worked in low income schools for 25 years and heard story after story from wellmeaning parents and saw heartbreak after heartbreak - usually involving 1 to 3 kids in difficult situations. The personal problems far outweighed the lack of resourses to better themselves. Giving them the tools doesn't necessarily create the cure. But, giving them a living minimum wage is a start.

Addendum to the comment above. I didn't mention criminal histories. Believe me, I worked with kids whose mothers were prostitutes, mothers and fathers who were mentally incompetent in IQ or emotional status, ie, mentally ill, either going to jail or prison or just getting out, going to rehab for drug/alcohol addictions, third generation welfare, high school or earlier dropouts, and the list goes on and on! Believe me, if people wanted to get above minimim wage and they had their wits about them - they took advantage of the resourses out there to make their lives better. For those who stay at minimum wage - a buck raise is a very big deal!!!