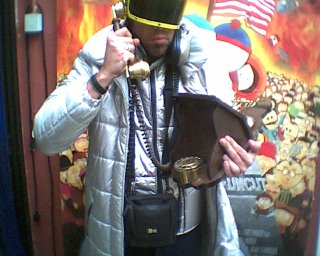 Every day brings new surprises in the wild and wacky world of the Bush Monarchy. One day its WMD lies, the next day illegal wiretappings, the next day leaks of classified data, and now news that the Busheviks and the GOP may be central figures in the 2002 phone-jamming scheme that kept New Hampshire Democrats from voting in that year's midterm elections, according to court documents.

Phone records show that Bush campaign operative James Tobin made dozens of calls to the White House in the immediate days leading up to New Hampshire's election for the U.S. Senate seat being vacated by Robert C. Smith. Tobin and two others were convicted in December 2005 of hiring Virginia-based GOP Marketplace on behalf of the New Hampshire GOP to jam another phone bank being used by the state Democratic Party and the firefighters' union to get-out-the-vote for then-governor Jeanne Shaheen. John E. Sununu, the Republican candidate, won 51% to 46%. The phone records show that most calls to the White House were from Tobin, who became Bush's presidential campaign chairman for the New England region in 2004.

Democrats will seek a federal court order Tuesday to force the White House and GOP to answer questions about the phone jamming in a civil lawsuit alleging voter fraud.

According to the AP, a Democratic analysis of phone records introduced at Tobin's criminal trial show 115 outgoing calls to the White House political affairs office between Sept. 17 and Nov. 22, 2002. Most conspicuous are the two dozen calls made from 9:28 a.m. the day before the election through 2:17 a.m. after the election.

In their civil suit, Democrats are pushing for answers concerning the nature of the calls to government offices "at the time of the planning and implementation of the phone-jamming conspiracy ... and the timing of the phone calls made by Mr. Tobin on Election Day."

For anyone out there who still harbors serious doubts over the allegations that the ReTHUGlicans have rigged recent elections, news of this scandal has to give reason for pause.
Posted by The Ostroy Report at 2:41 PM

Wow... this is some soap opera going on in DC... Let's not forget that Ken Blackwell in Ohio "didn't realize" he had stocks in Diebold...

116 phone calls jammed a phone switch?
Hmmm, I'm thinking that either NH has the worlds oldest, servicable phone system or you guys are completely technology ignorant.
Please come back after you get a clue.