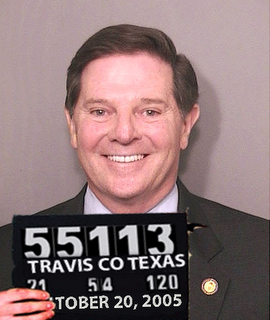 The Texas GOP's dysfunctional family is at it again, this time engaging in a feeding frenzy over who's going to be naming the candidates to run for embattled former House Leader Tom DeLay's soon-to-be-vacated 22nd Congressional district seat. Whoever is chosen will be facing former Rep. Nick Lampson (D-Texas)in November.

According to Texas law, four precinct chairmen--one from each of the four counties that make up DeLay's district--will be selected by party officials and given one vote each in selecting the candidates. Many local ReTHUGs support the law and are concerned over an attempt to undermine the process by party officials who claim it's unfair and arbitrary. They're specifically upset that Fort Bend County Republican Party chairman Eric Thode plans to mail an informal poll to 18,000 GOP voters, at a cost of about $12,000, to gauge the popularity of the prospective candidates. He also plans to publicize the poll results in an effort to put pressure on the precinct electors.

"It is very clearly not a representative sampling of Republicans," said Thode. "It’s horribly undemocratic, but it’s the process we’re stuck with."

The main concern of party officials is that the selection committee might choose a candidate who does not appeal to a broad swath of the GOP. In a letter that will be sent with the poll, Thode wrote, "We must ensure that our nominee has the support of a majority of Republicans across the district and not just the choice of a group of four."

"It strikes me as someone who does not have a lot of faith in the precinct chairs [to communicate] what voters are thinking," said Talton. "I don’t quite understand what he’s doing, other than it will favor a candidate from that area."

Howard also believes the poll favors local candidates and leaves the door open for political hanky-panky: "There are a lot of things that don’t make sense. Who is going to count the votes? What’s to prevent fraud?

Others, like Harris County GOP Chair James Woodfill, believe the law and the process is fair. "The precinct chairs are probably more educated than 99 percent of the voters."

Wallace also supports the poll and calls it "a wonderful idea" that protects the rights of voters.

One of the leading candidates, Harris County Judge Robert Eckels, in a surprise move, recently abandoned his race for DeLay's seat after claiming that his polls showed he'd beat Lampson by over 15 points. "It looks like I can do a whole lot more with the issues that are important to me…as a county judge." he said.

As for the growing GOP fracas overall, DeLay has so far stayed out of the cross-fire and his reps say he doesn't plan to endorse any particular candidates.
Posted by The Ostroy Report at 6:19 PM