REPUGlicans' Idea of Fairness: $34 Billion For Exxon Mobil, $100 for Us 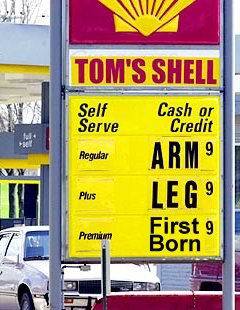 With gas prices barreling their way past $3.00 per gallon in many parts of the country, Republicans seeking re-election this year are starting to see the handwriting on the wall, and are making desperate attempts to connect with voters on this issue. But as usual, they're offering nothing more than mere window dressing and lip service. Proposals were unveiled this week that would give all taxpayers a $100 rebate to compensate them for skyrocketing fuel costs. This was announced on the same day as Exxon Mobil's $8-billion quarterly profit news. I guess that's the GOP's idea of parity.

The rebate would be part of a bill that would also allow the ReTHUGs to finally sink their environmentally-unfriendly teeth into the Arctic National Wildlife Refuge in Alaska to drill for oil. It was also announced that Congress might ease the exorbitant tax breaks afforded the Bushevik-friendly oil companies.

"The American consumer is the one that needs the break today, and we need to be taking steps to make sure that they aren't emptying their wallet every time they fill their tank," said Senator John Thune (R-SD).

And my personal favorite: "This gas price issue is huge," said Senator Susan Collins (R-Me). You said it, Susan. And you guys are gonna see just how big it is come November.

Even Fox's Bill O'Reilly chimed in, proving once and for all that yes, he has lost his mind, as he urged in his syndicated column Friday that the government "strongly suggest that oil companies voluntarily roll back prices to 2005 levels for the good of the country." What are you smokin', Bill?

Without a precipitous drop in energy costs between now and the midterms, it's looking pretty ominous for the Repugs.

"High gas prices are going to be the final nail in the G.O.P.'s coffin this election year," said Senator Charles E. Schumer (D-NY), chairman of the Democratic Senatorial Campaign Committee.
Posted by The Ostroy Report at 4:55 PM

Your election '06 assessment is right - gas prices hurt Republicans. But mostly because Dems are trying to convince everyone that it's the GOP's fault. Any economist will tell you that the gov't does not affect short term gas prices. Also, your thorough analysis of GOP shortcomings has a shortcoming of its own - it lacks any positive policy solutions or suggestions of its own, which is typical of today's Democrats. And being from NY, i guarantee you Chuck Schumer hopes gas prices continue to skyrocket - anything to improve his party's chances, even at the cost to regular Americans.

You guys are the ones who control every branch of government, and it's you guys who have screwed things up. Democrats do not have to explain anything or be obligated to come up with the solutions to your messes. You'll be judged in November on your own merits, not ours

Basically the GOP arrogantly think that middle-class Americans are - STUPID!

GreenGOP, I noticed your post DIDN'T contain a solution either. So I'll say it's just more GOP BS spin which means nothing!

Is Shumer acting as part of the problem or part of the solution? I don't know and neither do you.

Spew it somewhere else!