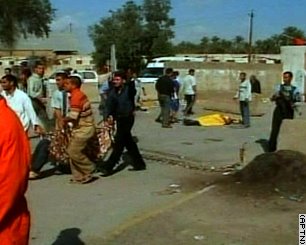 CNN reported Friday morning that suicide bombers struck the Burathaa Shiite mosque in Baghdad, killing at least 40 people. The mosque is affiliated closely with the Supreme Council for the Islamic Revolution in Iraq, one of the large Shiite political groups.

Both bombers were reportedly wearing suicide vests. One detonated an explosive inside the hallway of the mosque, and the other set off an explosive outside the site as worshippers were leaving, according to CNN. Another bomb killed 10 people a day earlier near the Imam Ali shrine in Najaf, the holy Shiite city in south-central Iraq.

The situation is spiraling out of control, and despite what Bush, Cheney, Rumsfeld, Condescending Rice and the ReTHUGlican leadership tells us, Iraq is crushing under the weight of a full-blown civil war. Our mission, whatever the hell it was intended to be--WMD, nation-building, humanitarian--has failed. It's done. We must pull our troops out of this bloody disaster and let the Iraqis play out their political destiny however they see fit.
Posted by The Ostroy Report at 9:15 AM