Trying to Make Ends Meet, Voters Are Angrier Than Ever With The Busheviks. It's Still The Economy, Stupid 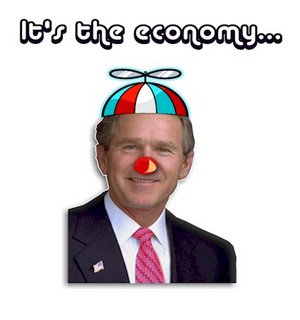 If you listen to President Bush, the economy's just hummin' along, experiencing solid growth and expansion and increasingly robust. The only problem is, the average American isn't feeling this prosperity in their wallets. To the contrary, they're feeling more squeezed and shortchanged than ever. That's because there's a huge disconnect between how the Bushies evaluate the economy and how ordinary citizens do. They're asking themselves, "are we better off than we were two and six years ago?" and the answer, according to every poll, is a resounding "hell no." And that spells trouble for the GOP this November.

To be sure, there are key indicators that would support Bush's claim of a strong economy, such as low 4.7% unemployment, solid 3.5% GDP growth and a stellar stock market. But in terms of significance to Mr. and Mrs. Average Joe, these metrics pale in comparison to skyrocketing fuel costs, runaway health expenses, rising housing costs and interest rates, stagnant real wages, and record home foreclosures. The typical American couple needs two jobs just to make ends meet. And now it costs them another $20 bucks a week just to fill the tank, with the average self-serve gallon of gas nearing $3.00. It's also cost them significantly more to heat their homes this Winter, and the effect of rising interest rates on credit card payments and home equity loans has created a real squeeze on the pocketbook.

In the critical area of healthcare, spending has doubled from 1994 to 2004. Each year, insurance premiums increase 12-20%. Employers, feeling the pinch themselves, are asking workers to contribute more and more of their coverage costs every year. Unpaid medical bills are the number one cause of bankruptcies in America today. And for a couple retiring in 2006, they're going to need $200,000 in savings just to cover their healthcare needs. Is it any wonder then that a new Washington Post/ABC News poll shows that 59% believe the economy is "not good" or "poor?"

Middle class voters across the country were duped in 2004 into focusing much of their attention on diversions such as gay marriage, religion and manufactured terrorism threats. This year, while the war in Iraq and the plethora of ReTHUGlican scandals will surely be primary get-out-the-vote themes for the Democrats, there's every reason to believe that the almighty shrinking dollar will be #1 on voters' minds as they close that curtain behind them. It's still the economy, stupid.
Posted by The Ostroy Report at 9:12 PM

too bad the repugs still count the votes without anyone looking over their backs.

The right winger in Tennessee that I have been going back and forth with since the horrible election of 2000, always says that the economy is great and all people need to do is go to school.

I'm from Michigan and when I ask what exactly should a person (who has lost their good paying job) in their 50s take and do to get a good job, he never has the answer.

The Repubs do not understand what the average American is going through.

Without a middle class we are back in the Gilded Age.


Cathy
From the once great state of Michigan

Bush often cites as an indication of a good economy the increase in productivity of the worker. Management sees this as better utilization of a resource. For the worker, however, it means more work for the same or less pay. This "more work" may be the result of layoffs or concessions by unions. Job security, in many industries, is a thing of the past and contributes to societal anxiety.

I live on Social Security with no hope of keeping up with inflation. I feel the pinch daily and today T. Boone Pickens was in town telling the local media that soon gas would be $4.00 per gallon and would hit $5.00 before the year is over!
He said that was great and that it would be awful if it ever went back below $3.00.
Yep, the economy is good for some folks!

Karl Rove is already at it... today Bush announced a price probe into gas prices... and is supposed to order a halt to filling the national strategic reserves to bring prices down now.