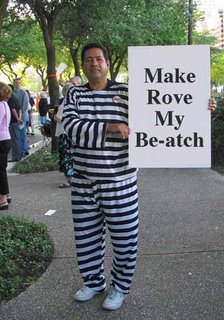 It's beginning to look a lot like Fitzmas, as they say in Democratic circles. It's likely the former top policy advisor for President Bush will soon come under federal indictment for his role in the CIA leak case. In the Fall '05 indictment of VP Dick Cheney's former chief I. Lewis "Scooter" Libby, Rove is repeatedly referred to as "Official A." According to legal experts, individuals given that status typically get indicted. More significant, of all the cases prosecuted by independent counsel Patrick Fitzgerald, who's leading the investigation, every single "Official A" was indicted. Not a good sign for Turd Blossom.

On Wednesday, Rove was called before the grand jury for a fifth time, and faced 3 1/2 hours of grueling questioning by Fitzpatrick. Given the amount of times he's been called to testify, and the amount of time he spent under oath this week, it's becoming increasingly certain that an indictment is imminent.

"Anytime your client has been identified as a subject, and has gone to the grand jury five times, and the last time is 3 1/2 hours, you have a lot to worry about," said Fmr. Deputy Independent Counsel Sol Wisenberg on MSNBC's Hardball Thursday.

Rove, who's likely to face charges of perjury and obstruction similar to Libby, was very upbeat and optimistic at a D.C. party Wednesday night following his testimony. But like many things in the Bushevik Monarchy these days, it's all window dressing. Rove has to be seriously concerned about his fate despite putting on a good public face. He reportedly told pals the day was extremely intense and difficult; like he had "gone to the doctor."

Sitting in for host Chris Matthews, Norah O'Donnell said "With gas drying up, with leaks spilling out, and with polls falling down, Republicans face some tough times in Washington." At least for now, let's just hope, for Karl Rove, the party is officially over.
Posted by The Ostroy Report at 9:59 PM

Does it really matter?

The Repubs still run it all.

There is a guy in my building at work that looks like Rove's relative... it is scary.

Gee, you have a fat white bald man with glasses in your building? Me too!

This is why Karl stepped down from his post at the White House. Next stop, the Big House.

Shades of Watergate only ramp it up several notches. I'm chilling that second bottle of champagne. The first was for DeLay.

The GOP is so screwed and it's about time!