Can The Dems' Junkyard Dog Rahm Emanuel Be Right About Hillary? 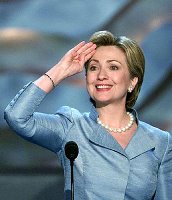 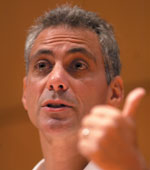 Illinois Rep. Rahm Emanuel, who is also chairman of the Democratic Congressional Campaign Committee (DCCC), makes no bones about it: he passionately supports the 2008 presidential candidacy of New York's Sen. Hillary Clinton and thinks she can and will win. Emanuel, who served as a top White House advisor to President Bill Clinton from 1993 to 1998, is widely regarded as one of the party's most tenacious, aggressive and highly calculating operatives. Many in the party refer to him as their junkyard dog; the go-to-guy who will do whatever it takes to get the Democrats back in power. His unrelenting support of Hillary therefore stands out as either an uncharacteristic political anomaly in his fiery, focused career, or he may actually be quite prescient. Given his fairly steady, successful track-record, his backing of his former boss's wife is worth consideration.

We've all heard the endless talk about Hillary Clinton's unelectability. That she's a Northeastern liberal and one of the most polarizing figures in Washington. I must admit I am in that chat club. But I also must admit there are days where I furrow my brow, put fingers to chin and go, "hmmmm, maybe the old girl does have the chops and a fighting chance." But then reality returns, and I usually realize I'm either fantasizing of having Bill back in the White House, or of the very cool notion of having a woman president. I still struggle with the prospect of Hillary succeeding beyond the primary.

But the conventional wisdom of the bean-counters is that all Hillary needs to do to get elected is carry former presidential hopeful John Kerry's blue states, and pick up just Ohio or Florida. Candidates must receive a majority of 270 out of 538 electoral votes to become President. Kerry's electoral tally was 252. With Ohio's 20 votes, or Florida's 27, Clinton would become the first woman president in history. Looking at the numbers this way, and realizing how precipitously the nation's fortunes have dropped since 2004, it's not such a stretch that she could actually pull it off.

The landscape may actually be quite ripe for Hillary. There have been several political scandals that have rocked Ohio, chiefly the criminal indictment of Gov. Bob Taft and the imminent indictment of Rep. Bob Ney. And over in Florida, thanks to term limits, outgoing Gov. Jeb Bush will not have a chokehold on Florida's election process in '08. Throw in mounting voter anger and frustration over stagnate wages and astronomical gas and oil prices, Ohio and Florida may be within easy reach of the former First Lady.

Let's get one thing straight: I'm still an Al Gore guy, and I'm hopeful he'll enter the race. But let's just say I'm startin' to percolate a little over Hillary's real chances. Maybe, just maybe, Emanuel's onto something. Hmmmm....
Posted by The Ostroy Report at 5:05 PM

Rahm's right! Hillary is going to make a great president!

The flaw in this thinking is that Hillary would carry the Kerry blue states. In the same way that many Democrats were cooled off by a McGovern candidacy in 1972, many Democrats would also turn away from a Hillary candidacy, especially if the Republicans run an apparent moderate like McCain. Hillary could not possibly rise above the din of invective, distortions, partial truths, and uproar that would accompany her everywhere she would go.

There simply is no one as powerful as Gore to run as the Democratic candidate in 2008. He has all the experience of the Senate, being the Veep, and of losing in what is widely believed to be a questionable election in 2000. He has beautifully aged and ripened his political abilities, positions, and voice. There is no Democrat that would be as formidable. Just on the one issue of global warming which the American people are beginning to see with their own eyes, and which in the next two years will become even more evident, he would be utterly unbeatable.

A Hillary Clinton candicay would be a monumental mistake.

With Bill Clinton being the only two term president in the last 60 years,to me the only course of action would be for a two term Gore presidency with a Hillary continuation of two terms. History has to right itself. It's Gore's time. I live in NY and Hillary has promised us a lot in her first term as senator. She now needs to walk the walk and get more experience
in following through with those promises. Al Gore was against the war from the start. Hillary should have been more tuned in to her constituency instead of romancing all those in the "loop". Senator Byrd should have been her mentor instead of Jay Rockefeller.

Start talking about Al Gore everywhere you go. Spread the word. Now who would you like to have a beer with?

I agree with the second and third comments above. I am convinced Hillary does not have a chance. Not only is it her support for the war and the way she's pandered to the right (as has McCain, however) it's that not one southern man will vote for a woman, especially her; and, many closet misogynists in the blue states will not vote for her. The women's movement is dead, and the jealousy of other females which flourishes in high school, more times than not, lives to flourish in mature women. Most women will not vote for her. And while NYC and a few other cities are advanced, most of the country is culturally backward and not yet ready for a female president. Rahm should run. He has a better chancc.

Here's a possible counter to the above comments about Southern men: think about all the moderate Republican women who just might assure their husbands they'll be voting for the GOP candidate...and then close the curtain, smile, think "you go girl!" and then vote for the first woman in history to become president. Women voters have been yessing their hubbys to death for centuries. They won't stop with Hillary. Just some food for thought!
Andy

Hillary is unelectable because progressive Democrats will not support a "Republican Lite" candidate. If she manages to get nominated, it will be the beginning of the end for the Democratic Party - if you think Ralph Nader hurt the Dems in 2000, wait until you see 2008. If they nominate Hillary (or any other "centrist" - i.e., right-pandering - candidate), progressives will leave the party in disgust and despair.

By 2008 the main topics will be Iraq and the economy with a list of others including health care, environment and social security.

The Democrats can pull this off with relentless ads and talking points.

I will back Hillary but only after Al Gore elects not to run and the same goes for Feingold.

Bottom line is we have to get those Republicans out of office.

Hillary has too much baggage. The Dems want a strong representative, probably in the form of Gore, Finegold or Gen. Clark. Bush in 2004 and Hillary in 2008 might look like "two wrongs" to alot of voters. It does to me at this point and I've always voted for Dems. I like the Gore/Clark combination, because Clark has the military appeal that can swing some Red state flag wavers. Plus, he is someone who can actually do something, as a VP, besides bird hunt in Texas and suck in money from Halliburton. The Presidential and Vice Presidential images are at a big-time low. It's going to take two candidates with stage presence and credentials to sway Americans away from disgust.

1. If the primaries were held today, Hillary would win strolling.

Since she is likely to be the nominee, it would be well for Democrats to get used to the idea and to stop spreading defeatist talk.

2. If the general election were held today, McCain would win easily, regardless of whom we nominate.

Since McCain is likely to be the GOP nominee, it would be well for Democrats to begin destablizing his reputation and popularity.

Please, people, let's put somebody up there who at least has the courage to state the truth.

There is no valid reason for us to be at war in Iraq and there never was. Through 2000/2001 I was convinced of this by precisely the same information that continues to convince me today - its just migrated from page 14A to the front page (occasionally) and gets some air-time on "Hardball" now.

No Democrat who claims "we were lied to" as an excuse for their neocon vote into imperial war should be considered by self-respecting progressives - these are self-interested equivocating poll-watchers who will let us down again if they think they can glean benefit or political protection from such action. Hillary is one of the worst - who out there thinks she really believes in that proto-fascist anti flag-burning bill she supports?

Get some balls and leave the reservation - support Feingold, the apparently rehabilitated Gore, Howard Dean, Ralph Nader, ...write in Howard Zinn...somebody with a little integrity!

Where do you get your Hillary information? She's never even mentioned in conversations. The polls show that just about any Dem could win at this point because everyone is soooo sick of the Republicans. Think deeply instead of knee jerky. She is disinformation at this point and if you want to scare redneck church fearing voters into voting Republican again just offer a woman (Hillary) up as the possible most powerful person in the world! It's not smart to back her this time around. Think! Think!

I think Bill Mahar's reaction to Rahm saying he was backing Hillary said it all. The look was like, What are you, nuts? What I'm waiting for is a court case to be decided that the election(s) were stolen and that Gore rightfully won. Scary! The history of the United States rewritten in a heart beat. Get real - Gore is the best choice!

Gore/Feingold or Gore/Clark would be great, but even if it's Hillary, I will still vote for her. I am a 50+ yr old white male evangelical christian. I am supposedly the base of the Republican party and I used to be. However, I have taken on the creed of the Jewish people after WWII - NEVER AGAIN! Never again will I vote republican. I'll vote for a yellow dog on the Democratic ticket before I'll ever vote republican. I repeat - NEVER AGAIN! The policies of the republican party are diametrically opposite of the good of the American people, their government and the Constitution. NEVER AGAIN!

Good for you Evangelical Never Again! Now, do the right thing and convince a few of you fellow GOP basers to see the light!

"If they nominate Hillary (or any other "centrist" - i.e., right-pandering - candidate), progressives will leave the party in disgust and despair."

WHERE WILL THEY GO??? lol