The Real Problem With Bush's Leak 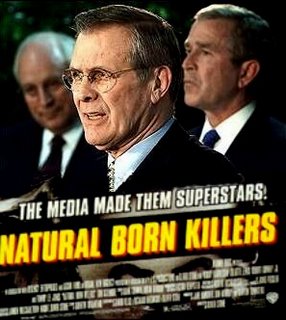 Politicians, pundits, journalists and bloggers have been debating President Bush's ultimate motivation for authorizing the leak of classified information about the Iraq war to Scooter Libby. But the central issue in the case is not whether or not Bush broke the law per se, or whether he sought isolated revenge against Joe Wilson. What's important to understand and determine here is whether or not this leak is part of a much broader scandal; part of the Bush administration's cover-up of a pre-planned invasion of Iraq, and the cherry-picking of intelligence to fit that mission.

There's been much speculation and documentation (Downing Street Memos; Richard Clarke's book; etc) that indicates that the Busheviks, as early as January 2001, had their military sights on Saddam. What's more, recent documents out of Britain show that in January 2003 the war plans, and a date for the March invasion, had already been set, even before weapons inspectors had completed their work and before then-Secretary of State Colin Powell was set to appear before the U.N. Security Council to make the U.S.'s case for war. These war-mongers had every intention, from day-one, of invading Iraq whether or not WMD existed. Eidence continues to surface which strongly suggests that the Bushies hand-picked intelligence which bolstered their WMD rhetoric, while intentionally ignoring any dissenting advice or concerns from generals and military experts who doubted the existence of WMD and questioned the overall viability of the mission.

And that's the real issue here. On its own, Bush's leak falls into a very gray area of what a U.S. president can and can't divulge to the press and the public in the interest of national security. That argument can be debated for the next 50 years without coming to any substantive conclusion. But when a president leaks classified information for purely political purposes, to cover up the fact that he manipulated intelligence in order to justify war, and to punish those detractors who refute his bogus claims, then that's an entirely different matter. In fact, those would be impeachable offenses.

This invasion was planned I believe before Bush was even a twinkle in anyone’s eye for the presidentsy. I believe these neocons wanted Iraq when Clinton was in his first term yet and were really pissed when he was elected for a second term. This put there master plan on hold for another 4 years and I can just imagine how they were trying to figure out how to make up for this lost time (frame). Well they were not going to be denied again in 2000 so it was planned (I believe) to steal the election if need be, but no matter what, they WILL have their puppet put in the White House.

Then we could see how the wheels were turning and they got their war but they were NOT finished yet, there was more to do. Hell, it worked once and we got a way with a stolen election, let’s try it again after all these Americans are stupid and fall for any thing. Kerry, Dean or even Clark, no matter who ran would be defeated AGAIN. These people are on a mission and it’s all centered on greed. They are not done with their “master plan” so what happens in the next three years will not surprise me in the least, we have not seen anything yet.

As John Dean might say, the last leak revelation fits with a pattern of practice in this administration.

Yes, much of what has happened since the Supremes installed Junior in the W.H., is about greed. It is also about power and keeping it at any cost.

When people get it into their heads that they are fighting for God, they are capable of all manner of criminal horror and they are quite shameless about it.

It's a big issue because no small number of Americans want him to pay the debt he has built with the blood of American soldiers.

It is time for the debt of blood to be paid. He has cost America and the world much, so that he can fatten his own wallet.

It is time, like with DeLay, that we empty his pockets of the money he stole, and continues to launder in the name of "freedom."

They say "freedom isn't free." But do they also consider the cost of "freedom" when it is paid in LIES and borrowed confidence?

Dumbya will do down, the question is will we all have to go with him?

just heard that Barbara Bush donated a ton of educational software to the victims/schools/libraries in New Orleans.

Who owns the software co? Her other son, Neil Bush.

Who sponsors and backs the software company? The UAE, United Arab Emirates, the same country we almost gave our ports to....

But what this story backs up is that the Bush dynasty has been sleeping with the Sheikh (dynasty) for nearly 30 years.

Ulterior motives in this presidency? But of course!!! It's as clear to me all these 6+ years as the crystal clear blue sky I'm seeing outside my window!!

I think we may see an impeachment *prays hard for that*.....

What an embarrassment he is to the USA!!! And that's an understatement!