"The Decider" Not Really Making the Decisions After All? 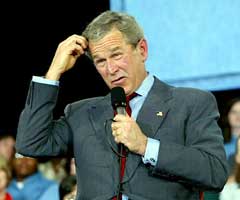 Republicans close to senior Bush advisors are saying that the president is neither responsible for the recent spate of staff changes or is happy about them, according to the NY Times. Newly appointed Chief of Staff Josh Bolten apparently is calling the shots, and the result has been a reassignment of top advisor Karl Rove's responsibilities, and the "resignation" of press secretary Scott McClellan. Bolten is also floating the idea of replacing White House counsel Harriet Miers, another capo in Bush's Texas mafia.

In defense of his defense secretary Donald Rumsfeld this week, Bush barked at reporters like a petulant 10-year-old: "I'm the decider, and I decide what is best." But "The Decider" may be just another Bushevik catchphrase written by some witty advisor to make the decidedly un-presidential president seem as presidential as possible.

But what do all these staff changes mean to the average American anyway? Ever watch Jay Leno when he hits LA's Melrose Avenue for his man on the street interviews? You'd be surprised how many people think Hillary Clinton is the vice president. The level of ignorance is astounding. Think they even have a clue who Scott McClellan or Andy Card is? The recent, and apparently ongoing, West Wing shake-up is nothing more than window-dressing. A rearranging of deck chairs on the Titanic. And besides, the cronies are being replaced with more cronies. For example, rumor has it that ex-Bush 41 speech-writer and current Fox News hack Tony Snow has officially been offered McClellan's job. To paraphrase Jon Stewart this week, Great Idea...we'll pay a guy from Fox News to come up with all the stuff we want Fox News to cover. Watch out, the Fox (pun intended) is back in the henhouse.

Bolten's moves are designed to appease House and Senate Republicans running for re-election in November's midterms. They desperately need to be able to go back home and tell constituents that the party's doing something to address the mounting scandals and political failures of the Bush administration. But can you picture Sen. Rick Santorum out in the rural patches of Western Pennsylvania explaining the benefits of having a new White House policy director, a new chief of staff and a new press secretary? Yawn. He'd be met with shouts of "when are gas prices gonna come down?"...and "when are my wages gonna rise?"...and "when the heck are we gonna get out of Iraq?" The average American still sees Bush, Cheney, Rumsfeld and Rice as the face of the GOP, and they still unfortunately have their jobs. Their free-falling approval ratings, and the abysmal ratings of the GOP-controlled House and Senate, is enough to make the incumbents cringe. But until the administration makes some real changes--firing Cheney, Rumsfeld and/or Rove--it's the same old mob.
Posted by The Ostroy Report at 8:11 AM

well what else is left to say....now if people would just reread the declaration of independence...the escape clause

Keep the Bush team in tact until it is forced to leave en masse.