In France, Protest Leads to Change. In U.S., Protestors Get The Finger By GOP Leadership 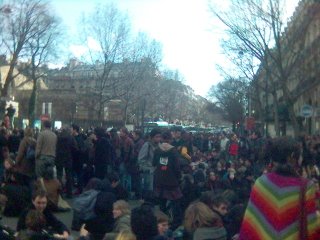 Despite all the patriotic gobbledygook about democracy in the Unites States, we are still in the dark ages compared to other nations like France who regularly heed the calls for change from its disenfranchised populace. Taking to the streets in Europe sure seems like a much better bet than doing so here in America these days. In the States, the protestors' cries fall on deaf D.C. ears.

Earlier this year, French Prime Minister Dominique de Villepin introduced a law abolishing dismissal protection for all workers under the age of 26, thus granting employers the ability to fire workers without cause during a two-year trial period. The law is intended to reverse youth unemployment. But opponents say the law only serves to reverse a generation of job security afforded all French workers. Needless to say, in a country where protest and striking is as commonplace as drinking wine, this prompted outrage from students and unions who fear that the new law would lead to a total abolishing of social welfare and dismissal protection. Since February they've demonstrated aggressively, often violently, occupying universities and holding strikes. Police clashed with hundreds of students and union members just blocks from the Eiffel Tower after a small number torched cars and smashed store windows. More than 600 people have been arrested in the last few weeks. A general strike was in the works if the protests had failed.

Showing more true leadership than President Bush will ever experience in two lifetimes, French President Jacques Chirac, demonstrating that his government is more "of the people, by the people, for the people" than our own, announced plans this week to replace the controversial employment law. The people took to the streets and their government listened. And its president had the maturity, self-confidence and foresight to admit error and reverse course before the country was torn apart further. How refreshing. If only the Busheviks had the same humility, and regard for its citizenry.

In America, not since the 1960's have we seen truly successful protest. The ReTHUGlican leadership in our country hates dissent and disdains protestors. The Busheviks rule like a monarchy, and social advances made over the last 40 years are, incredibly, at risk of being reversed. The ReTHUGlican mantra is "our way or the highway." Civil rights? Workers' rights? Gay rights? Women's rights? Religious freedom? The GOP bullies couldn't care less. It's their movie, and we're nothing but extras. And the hundreds of thousands protesting in our streets over the immigration issue this week? See how far it gets them. Bush, Cheney, Rove and Mehlman are sitting around Washington with their noise cancellation headphones planted firmly on their big fat narrow-minded Republican heads.
Posted by The Ostroy Report at 8:35 PM

wow that cost of war thing is crazy man..

The only virgourous, passionate, strong and probably effective demonstration/protest I've noticed in the past several decades is the one by the illegal immigrants. They have the audacity to break the law and enter our country to "steal" our resources and then visibly and forcefully protest when their "rights" are being "violated" by the threat of law enforcement. Americans on the other hand have become as spineless as the Dem. Party that could help them. Even the Catholic Church is urging the outlaws to continue to break the commandment "thous shalt not steal" and demand what is not rightfully theirs. And, few on the side of the law are making any noise. Our once srong "national character" is gone and true Christianity seems to be on the way out.

So do we refer to that as "Freedom Protests"? (sarcasm intended)

Hmmmm, Burning cars and destroying and looting private property = effective demonstrations?
And you call the GOP thugs?
Sorry, you're just as bad, if not worse than those you oppose.

THE SOONER WE CAN GET INTO THE NEW PARADIGM OF A GLOBAL COMMUNITY WITH GLOBAL RESPONSIBILITIES, THE SOONER WE CAN EXTRICATE OURSELVES FROM THE CONSEQUENCES OF CONTINUING TO MAINTAIN AND ENFORCE GLOBAL ECONOMIC AND SOCIAL DISPARITIES...THE SOONER WE CAN WORK TOWARDS A COOPERATIVE, GLOBAL
FUTURE.
THOSE DEMONSTRATING OVER IMMIGRATION ISSUES REMIND US OF THIS NEW PARADIGM.

"as bad, if not worse than those you oppose"

The leadership of the government is actually ruining citizens' lives by throwing us to the mercy of the "free market," getting rid of the welfare state and economic regulation (and that went on through the Clinton administration also), if not actually killing them in war or disappearing them into military prisons.

A few smashed shop windows and burned cars can hardly compare with that kind of violence. Torching cars is a weekend sport in France.