The Pinata is Gone. But We Could've Used DeLay For Another 7 Months 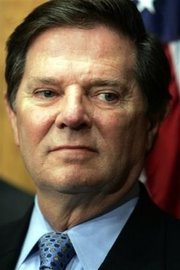 In the wake of indicted former House Majority Leader Tom DeLay's announcement that he's not seeking re-election and will likely resign in June from his 22nd District seat in Texas, the sounds of "Ding Dong the Witch is Dead" can be heard throughout Washington's Democratic circles. But this is one Democrat who's not singing. I kind of liked having the witch around. Liked having him perched high above as our political pinata. Someone we could use as the poster-child who symbolizes the rampant cronyism and corruption of the Republican Party. A catalyst to drive Democrats to the polls this November. In short, Tom DeLay was good for business, and I will sorely miss him.

DeLay is dirty, and the GOP wants no part of him anymore. Make no mistake: DeLay's not resigning because of any "war on Christianity" or due to any vast "liberal conspiracy." The Hammer is the focus of very intense federal investigations, with the walls closing in him now that two of his former top aides, Michael Scanlon and Tony Rudy, have pleaded guilty. The feds are also circling around his former chief of staff, Edwin A. Buckham, as a possible co-conspirator.

What the GOP has now is opportunity. A chance to say "Hey, we got rid of Duke Cunningham. We got rid of Scooter Libby. We got rid of Tom DeLay. And others. Surely we've had some problems, but we've cleaned House, literally and figuratively." Don't think for one second that Rove, Mehlman & Company have not thought this through 1000%; that this is anything but a well-orchestrated, highly calculated ploy to take the heat off the incumbents who see re-election; to win back voters' trust and support. To the Repug's, the party's over and the pinata's coming down.

Now don't get me wrong. DeLay is scum, pure and simple. And America, and Congress, will be a much better place without him. I just would rather have had him kicked to the curb on our terms and timing--after we're done with him and have used him fully to our advantage--not theirs.

And in a final coup by DeLay, in pulling out, he gets to take all the cash from his campaign war-chest and use it towards his legal defense, which as the Washington Post reported Tuesday, has so far been "financed largely by corporations with business before Congress." But that's ok. He's gonna need it.
Posted by The Ostroy Report at 11:06 AM

That's what I thought too. It would have been better to run against him than someone else.

Cathy
From the state with the highest foreclosures in the country (Michigan).

Also, DeLay is now free to lobby against everything he legislated against, and make beaucoup bucks while at it. However, CW is that he'll be out on the lecture circuit, preaching to the choir. But he'll do all the damage to the orderly and legal conduct of government business he can. Naturally.

Good riddance to a vicious little viper! He will still try to do some damage, striking from his snake hole. Oh, my apologies to snakes! I don't mean to malign them!
The pinata comparison isn;t so apt. When you broke open a pinata it is full of candy and sweets!

Buh-bye Tommy, don't let the screen door hit you in the a** on the way out.

We have five bottles of champagne at our house.