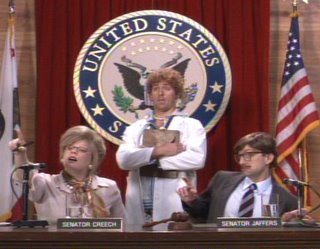 The Republican-controlled U.S. House of Representatives and Senate is so mired in partisan bullshit these days that it's been rendered impotent by its own leadership. It's no wonder a healthy majority of Americans, according to every poll, are dissatisfied with their elected leaders. And Democrats lead in the polls by 16% among voters who'd rather see them control both chambers.

As the 109th Congress headed out this week for its undeserved 2-week vacation, it's continued to leave major pieces of legislation on the table, unresolved and caught in the partisan crossfire. Taxes, the budget and immigration are three such issues that are stuck in the political muck. What we have in Washington is a serious case of inertia; elected representatives whose judgments are so clouded by self-serving interests and self-preservation instead of the best interests of the American people. With their eyes focused on November like a Russian MIG, this sorry bunch of whores is doing nothing but jockeying for position and cat-fighting like a gaggle of high-school girls. And at our expense.

They don't care about the billions wasted and being spent in a runaway budget. They don't care that the average American wants and needs an equitable system of taxation. They don't care about the protests in the streets over immigration; of the 11-million people in this country whose legal status must be somehow resolved at the same time we do whatever necessary to secure our borders. They don't seem to care that our ports are a terrorist disaster waiting to happen. And why not? They're too busy worrying about other important issue like gay marriage and 'the war on Christianity.'
Posted by The Ostroy Report at 7:51 AM

Why get on the congress for doing nothing and going on vacation, Bush has done NOTHING for almost 6 years and still vacations at his ranch. It's the American way.