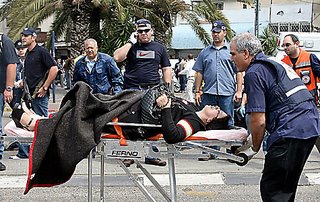 Another terrorist attack in Israel killed nine people Monday. And Hamas, the Middle East's Sopranos of suicide-bombing insanity, has called the murderous attack a legitimate response to "Israeli aggression" and promised "more such operations." To the critics of Israel's recent decision to cut off funding to the Hamas-led Palestinian Authority I ask, how can you in good conscience condone such a violent regime? Do you honestly expect the Israeli government to financially support these brutal killers? Perhaps you also believe the United States should start funding Al Qaeda?

The suicide bomber phenomenon has bred a new species of pest. They are the new rats and cockroaches. A burden to society that cannot be killed. The suicide bomber has become the unbeatable enemy. They're invisible; how do you fight an enemy you cannot see? How do you fight someone who has zero regard for human life, especially his own? How do you put the fear of God into someone whose God has instructed him to blow himself up and take innocent children with him? And like rats and cockroaches, they are multiplying faster than we can kill them or they kill themselves. For every one of these misguided 72-virgin-seeking fools who pulls his cord, there's dozens more waiting to serve Allah with the ultimate sacrifice. Probably the only truthful statement ever to come out of Donald Rumsfeld's mouth was in the fall of 2003 when he said the U.S. is not winning the war on terror "because new terrorists are being created faster than we can kill or arrest them." Thanks, Donny, my point exactly.

So back to the Israeli situation. Israel has cut off some $50+ million in tax payments to the Palestinian Authority. The U.S. and the European Union has cut funding as well. The Palestinians as a result face economic devastation if the payments are withheld long-term, but unfortunately that's the price they'll pay for electing a murderous bunch of terrorists hellbent on Israel's destruction. The Palestinians have spoken, and have made their choice. But Israel should not be expected to fund this madness.
Posted by The Ostroy Report at 8:21 AM

Thanks for your clearheadedness on this subject. People would understand the situation a lot better if they put themselves in Israel's (and Israelis') shoes.

Ostroy's narrow-minded viewpoint about suicide bombers does not seek to discover their true motivation -- only describing these individuals as "virign-seeking fools." I found an book review that gives a better perspective that would benefit our administration and military in learning the (obvious) reasons behind the suicide bombings in the Middle East:
http://www.lewrockwell.com/wanniski/wanniski87.html
Here's a sample:
"Professor Robert Pape's brilliant new book 'Dying to Win: The Strategic Logic of Suicide Terrorism' gives Americans an urgently needed basis for devising a strategy to defeat Osama bin Laden and other Islamist militants. In scholarly and low-key prose, Pape delivers the results of his own extensive research and that done by the University of Chicago's Project on Suicide Terrorism. In so doing, Pape demolishes the relentlessly repeated assertion of the neoconservatives and Israeli politicians that Islamist suicide attacks against America and other counties are launched by undereducated, unemployed, alienated, apocalyptic fanatics who are eager to kill themselves because Americans vote, have civil liberties, and allow women to drive cars. ... suicide attacks – they are an effective weapon for an inferior force fighting a great power, especially a pain-averse, democratic great power – and the reality that groups using such attacks are playing for strategic stakes: Their goal is victory, not mere destruction. The suicide attacks by each of the groups studied in 'Dying to Win,' Pape concludes, were "mainly a response to foreign occupation rather than the product of Islamic fundamentalism." In sum, America faces a logical, patient, and deliberate enemy, one with clear strategic goals. This enemy is attacking because he perceives his country, culture, and/or religion are under attack. In addition, Pape shows conclusively that suicide attackers are usually respected and even revered in their own societies because they are defending those societies against a foreign threat. Simply put, Pape suggests there is no sound reason to believe the pool of potential suicide attackers can be dried up as long as their societies perceive an existential threat to their existence."
Suicide bombing is a more tragic cousin to guerrilla warfare. Guerrilla tactics were used successfully by Americans against the British in the American Revolution, for the same reasons as Pape described above, and these warriors were also revered by the people in their nation.

I don’t think you understand the quote from Rummy. Why do you suppose new terrorists are being created? Is it because they don't love there wives and children? They don't want a better life for them? They don't want a normal peaceful existence? I doubt it. I think he’s admitting the Israeli and American policies create terrorists and he doesn't care how many he has to kill. He just can't kill them fast enough. I'm not condoning, just stating the other point of view. There’s enough blood on the hands of all sides.

I know this is gonna piss you off, but it has to be said.

But Israel should not be expected to fund this madness.

I was under the impression that Israel actually collected taxes that were due to the Palestinians and were not actually funding them as such. It's a small point, but it may make a big difference in the Palestinian reaction to the loss of those funds.

Anonymous: you won't get very far in life justifying suicide bombers and/or serving as their apologists. As for my narrow-mindedness, I'm sorry. I have this little distaste for scum who kill innocent men, women and children.

Tom: that you even attempt to defend and/or explain Rumsfeld is both humorous and frightening at the same time. 'Smatta, Hannity's site was down today!?

Anonymous #2: The workers you refer to live and work on Israeli soil. If the Palestinians choose to feed off the land and expect to be treated fairly and hospitably, then they have no business electing leadership that promotes the ruthless murder of Israel's citizens.

Face reality! Hamas exists in direct proportion to the Israeli occupation and destruction of Palestine, many years ago. The issue will not go away because of this grave injustice. No amount of name calling "new rats and cockroaches..." will alter this fact.

Israel is the oppressor, and there is no moral equivalence to its policy of targeted assassinations, land seizures and other acts of organized violence which kill and maim far more innocents than the rather infrequent suicide bomber seeking revenge on the only targets available. I like to keep it in context - say the Balfour Declaration, and the subsequent flood of European Jews post-WWII.

The suicide bombing in Tel Aviv was unfortunate, but predictable under these circumstances. Moreover, I think its a bit gratuitous to say no one condones it. But I understand the central issue of the Palestinian even if you refuse to acknowledge it.

Wake up pal. Watch the movie Battle of Algiers re: the french occupation and resulting resistance
A quote

Journalist: M. Ben M'Hidi, don't you think it's a bit cowardly to use women's baskets and handbags to carry explosive devices that kill so many innocent people?
Ben M'Hidi: And doesn't it seem to you even more cowardly to drop napalm bombs on defenseless villages, so that there are a thousand times more innocent victims? Of course, if we had your airplanes it would be a lot easier for us. Give us your bombers, and you can have our baskets.