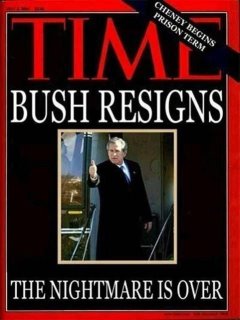 I've had this little fantasy lately....

Bush Resigns! Dick Cheney Imprisoned!
In a stunning turnaround of political fortunes, George W. Bush has followed in the footsteps of another embattled Republican, Richard Nixon, to become only the second president in United States history to resign from office. According to White House insiders who were granted anonymity for fear of being yelled at by an unnamed petulant high-ranking politician from a very dynastic Texas family that rhymes with "tush", Bush made the decision to avoid becoming the third president to be impeached. Under constitutional law, vice president Dick Cheney would become America's 44th president, but he's already begun serving a prison sentence stemming from his 2007 tax evasion conviction over false Hurricane Katrina contribution write-offs (why do they always get 'em on tax evasion?).

Ever since Democrats regained control of both houses of Congress in the November 2006 midterm elections, the likelihood of Bush facing impeachment had increased significantly. According to former top Bush advisor Karl Rove, the president grew more and more agitated each day, frustrated that his administration could not defend him and his policies in the court of public opinion, as well as in the hostile chambers of Congress.

"Since I was fired, it seems like everything's gone downhill for him," said Turd Blossom. "There's no one there who's able like I was to masterfully distort the truth and flat out lie to the American people. And when Bill O'Reilly replaced Tony Snow (who replaced Scott McClellan as press secretary), things got really bizarre. O'Reilly wouldn't know a successful talking point if it hit him in the head. For Bush, the White House had become a place he dreaded going to. One report even had him trying to paint Dick Cheney in the colors of the U.N. and then have him shoot Harry Reid and Nancy Pelosi in order to provoke an uprising; a battle in the streets between Red and Blue. Good and evil. The thinking was that Americans would not want to change leadership in the middle of a civil war. Man that's dirty! Someone as scummy as me wouldn't even concoct a plan like that. Ok, I guess I would," said Rove.

According to Bush's close friend Pat Robertson, Rove was fired after God told the president that the previously highly-esteemed advisor was a pathologically lying, criminally-motivated ruthless dirtbag.

We sat down with President Bush yesterday in an exclusive, unprecedented interview two hours after his resignation announcement. The following is an excerpt:

Time: "President Bush, why resign?"
Bush: "Why the heck not? I've had it with politics. I've had it with Democrats."
Time: "Are you saying that Democrats are responsible for this decision?"
Bush: "You bet I am. Once gas hit $5 a gallon they've been up my ass like a suppository. Nothin' but evil doers. Every last one of 'em.
Time: "But sir, that occurred on your watch."
Bush: "You apparently have not been listening to anything I've said since 2000. I only take credit for the good stuff (laughs that nervous, snivelling laugh as shoulders shake up and down uncontrollably). The bad stuff, that ain't my fault. Hell, gas prices started rising under FDR. And Jimmy Carter screwed that up even more. And..uh...uhm...er....Bill Clinton too."
Time: "Well, what about the Iraq war then?"
Bush: "Cheney."
Time: "No WMD?"
Bush: "Cheney."
Time: "Katrina?"
Bush: "Chertoff."
Time: "Dubai Ports?"
Bush: "Rove."
Time: "Harriet Miers?"
Bush: "Rove."
Time: "Immigration?"
Bush: "Rove."
Time: "Gas prices?"
Bush: "Rove."
Time: "CIA leak?"
Bush: "Rove!"
Time: "Corruption?"
Bush: "Duh!"
Time: "Mr. President, with all due respect, are you really going to suggest to the American people that you are not accountable for one single misstep or bad decision?"
Bush: "Now you got it!" It's my new strategery. I'm not gonna take this partisan BS anymore. I'm the Decider. I make the decisions. Like I've always said...fool me once, shame on you; shame on you. Fool me, er, you can't ...er...get fooled again...well, you know what I mean."

As for what happens next in the White House, next in line would be House Speaker Dennis Hastert, whose office has declined comment. His spokesman, Tom DeLay, is in Scotland golfing.
Posted by The Ostroy Report at 7:18 AM

Thanks for a good laugh

But if the democrats have congress, the speaker of the house would be a democrat! Wouldn't that be much better?

Good observation, Anonymous, but you've gotten way too analytical here. But here's my explanation: Number 1, it's my fantasy, not yours! I get to write what I want. Number 2, creative license always wins out. Number 3, if you must know, is that my fantasy is in fact 100% accurate. The Dem's had only a one vote majority in the House after an extremely close 2006 win. Prior to the 2008 election, Blue Dog Democrats Bud Cramer (AL) and Charlie Melancon (LA) pulled a Jim Jeffords and switched parties, ceding control back to the Rethugs. Hastert once again assumed the Speaker role. Satisfied?!

The following could also be included in the fantasy.

Halliburton gets shut down and all of its assests are sold off to help pay down the deficit.

Also, they confiscate all of Bush and Cheney's assets including the secret off shore bank accounts, which is where the missing nine billion dollars can be found.

You call this Dynastic Politics, do a read up on Singapore Politics instead....

You should submit this to the Carnival of Satire. They can always use good liberal stuff.

How bout this? Impeach both of them on one bill of impeachment, & viola, it's president pelosi.