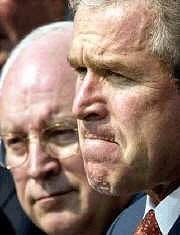 The rumormill is once again aflutter with talk that Vice President Dick Cheney will soon be sacrificed as the Busheviks bow to their plummeting poll numbers, and the ReTHUGlican-controlled Congress, with just a 35% approval rating, fights for its political survival. As the chief architect of the Iraq fiasco, and the poster-boy for divisiveness in Washington, Cheney, as I first predicted here February 15, will be forced to resign.

New polls show Bush earning the approval of just 38% of Americans. He's currently been under serious fire over his authorized leak of classified intelligence about Iraq to indicted Cheney chief Scooter Libby. Compounding this controversy is the fact that his military debacle there is raging out of control amid a rapidly expanding civil war, with calls from Democrats, Republicans and voters alike all calling for an imminent end to the carnage. Cheney's recent hunting incident only served to exacerbate Bush's growing frustration with his alleged subordinate. Shooter and Scooter have become not just political embarrassments, but liabilities. In short, in order to remedy the Busheviks' mounting leadership crisis to possibly salvage the November mid-terms for the GOP, heads need to be rolling down Pennsylvania Avenue. To date, the only head that's rolled anywhere belongs to former Bush chief Andy Card. There's also speculation that Press Secretary Scott McClellan is next. But combined, sacrificing these two would be like Iranian President Mahmoud Ahmadinejad firing his chauffeur and his food-taster. At least one or more major players must go, and with his approval rating hovering around the age of the average high school kid, Cheney will be the sacrificial lamb.

By June, it's likely that Rudy Giuliani, Massachusetts Gov. Mitt Romney, Mississippi Gov. Haley Barbour or perennial hopeful John McCain will be United States vice-president. Ladies and Gentlemen, place your bets.
Posted by The Ostroy Report at 7:10 AM

My bet is that once Cheney leaves office, either by resignation, impeachment or the end of his term, he does not give his war- mongering, Halliburton stock option profits to charity, but instead keeps them for himself.

Sorry, but Cheney's not going anywhere. That's just wishful thinking. I guess you don't get it. The election is all over. All that's left is the counting and they will take care of the counting.

Andy, my bet is that Dick signs off right after the fall elections and he will say it's health problems, want to spend more time with the family etc,. That will give George the chance he wanted, to bring his brother Jeb in as VP. Since we won't have Jeb anymore as our Governor (term limits thank God)he'll be just right for the Bush crime family to have another Bush in the White House if only for a couple of years. Don't rule out Jeb to throw his hat in the ring either for 2008, he at least can speak.

It was in the St. Petersburg Times last week that Jeb said "Hell no" to a question of running for Bill Nelson's senate seat. Sure, he knows Dick drops out and Jeb is brought in. Pappa Bush would like nothing more than to see this happen, well maybe not so much pappa but you know the gray haired Babs sure would.

Thanks Tom...to many people keep forgetting that the Republicans did not win the previous election fairly and because they got by with it, it doesn't matter what happens in the future because they will cheat again and they will win again no matter what! They can start WW111 and still be re elected....because the Democrats are to stupid to wake up and do something about our elections...even though it spells their doom if they do not...go figure!

Ron Paul for Vice President. Why ratify another rascal?

Cheney needs to go and then Bush needs to be impeached. If that means Rudy Giuliani, Mitt Romney, or John McCain take over for the rest of the term, so be it.