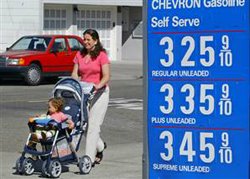 Hurry, wake the kids and Grandma! The Democrats seem to have found an issue they can unify around, and are making it their campaign mantra for the November midterms. They've apparently discovered that most Americans couldn't give a rat's tuchas about Social Security reform or abortion, and instead are getting angrier by by the nanosecond over $3+/gallon gas prices and the belief that the Iraq quagmire is a direct cause. Finally, voters are starting to connect the dots about the consequences of the war. And it couldn't come at a better time with the upcoming release of the new Al Gore book and documentary, "An Inconvenient Truth," a cinematic indictment of mankind's assault on the environment.

Democratic candidates from coast-to-coast are refining their talking points on the gas prices issue, and are being coached by the Democratic Congressional Campaign Committee (DCCC) on how to best connect with voters. A DCCC memo advises telling voters "Americans are tired of giving billion-dollar subsidies to energy companies and foreign countries while paying record prices at the pump." Many candidates, including Minnesota Senate hopeful Amy Klobuchar, are making skyrocketing fuel costs their central campaign issue.

The DCCC memo suggest holding a campaign speech at a gas station "where you call for a real commitment to bringing down gas prices and pledge that, as a member of Congress, you will fight for families in your district, not the oil and gas executives for which the Republican Congress has fought so hard."

Honestly? I think the Democrats truly have something here that's going to resonate with the average American whose wallet has been plundered by big business and the gas and oil industries, the latter of which has been given $15-billion in highly generous subsidies by the oil-loving Busheviks. The energy companies have been posting record earnings (Exxon Mobil's 2005 profit was an astounding $34-billion), and their CEO's have been raking in embarrassingly huge bucks. Well, Mr. and Mrs. Joe American are finally starting to get real pissed about having to shell out $60 to fill the tank while these fatcats get fatter. And they're starting to blame the Repugs, regardless of their party affiliation.

Voters are also angry over the war in Iraq and its effect on energy costs. A new Public Agenda non-partisan survey showed that 88% said problems abroad were endangering supplies and increasing prices. And this frustration is nowhere more evident than in Middle America, where driving longer distances is a fact of life, and where it's taking its toll on the Bushies and the GOP in a big way. A new Survey USA poll indicates that just four U.S. states--Utah, Wyoming, Nebraska and Idaho--remain solidly "red", or pro-Bush. And gas prices are single-handedly skewing Americans' views of the economy. A Washington Post/ABC News poll this week shows that 59% believe the economy is "not good" or "poor." So it's no longer just Democrats who are calling for Republicans' heads. There's an obvious revolt occurring among Bush's base, and the Democrats are smartly mobilizing around this key issue as a November rallying cry.

And just as all this intense, focused pressure mounts on the GOP, our pal Al Gore's gonna give the Dem's some serious wind at their backs late next month with the scheduled opening of his film. "An Inconvenient Truth," at times chilling, chronicles the former veep's career as he criss-crosses the country pounding the table over global warming, potentially one of the biggest issues facing future generations, and a subject for which he's been sounding the alarm for 30 years.

Many Democrats are still hopeful that Gore will use his leading position on the environment and his unassailable anti-war stand to eventually toss his hat into the 2008 presidential ring. Many believe he has a far better chance of winning than any other candidate likely to run. Want some interesting stats to bolster this claim? Gore won 51-million votes in 2000, more than any other Democrat candidate in history, more than any Republican except Ronald Reagan in 1984, and 500,000 more than George Bush. Just think of the numbers he could put up after eight dreadful years of Bush.
Posted by The Ostroy Report at 8:55 PM

Bush Defector To Demolish 911 Lies On May 6

The former top economist in Bush's Department of Labor, Morgan Reynolds, will speak out on the 9/11 inside job at the State Historical Society, University of Wisconsin-Madison on Saturday, May 6th. The film Loose Change will be shown, and refreshments served, starting at 1 p.m, and Reynolds will speak at 3:00 p.m.

Dr. Reynolds, who holds three U.W.-Madison degrees, and who is currently Professor of Economics at Texas A&M University, will present evidence that top Bush Administration officials orchestrated the controlled demolition of the World Trade Center, and the murder of almost 2,500 Americans, as a pretext for initiating their pre-planned "long war" in the Middle East.

Al Gore didn't do this movie as a political campaign movie, and has stated many times that this is not a partisan issue. Why do you insist on tying it to that? Do you realize by doing so that you may actually keep people away from seeing this movie if they think Al Gore only did it for political advantage? If you really care about what climate change is doing to this world beyond what you can use it and Al Gore for to write entries on this blog, how about you show it?

Do you know that people have died and are dying because of the effects of climate change? And you would spin this movie into something that is only being done for political advantage? I really thought those who said they supported this man cared about him a bit more than this.

Jan, every time you write to me with something like this I will continue to challenge you to back up your accusations with my words. So far, you have failed to do that. Yes, you are great at taking what I do write and stretching it quite creatively to make your points, but you never seem able to take my actual words and substantiate what you claim I'm saying. So, once again, as I've challenged you in the past, I will ask you to show me my words that support your following claims:

"Al Gore didn't do this movie as a political campaign movie, and has stated many times that this is not a partisan issue. Why do you insist on tying it to that?"

"And you would spin this movie into something that is only being done for political advantage?"

Until you can do this, jan, you really do seem like a loon!
Andy

These 9/11 conspiracies are nutzo!
I don't have any admiration or respect for Bush and his crowd but to claim they deliberately caused 9/11 is whacko!
They did help enable it because of incompetence and hubris.

Andy, you have said it over and over again and thank God you have, that Al Gore is the ONLY person worthy of running in 2008. He has changed 180 degrees in his speechs and yet he continues to have the fire in his heart to get his message to the people. If it takes a film or what ever means possible it has to be done.

You are correct in that the gas prices is the only thing that everyone can relate to and this is the golden moment we have been waiting for. The GOP (Greedy Old Party) is going to go down this fall and the Dems won't even have to work up a seat doing it.

I drive a Prius getting 55.4 mpg so the gas prices don't bother me that much but those driving the gas hogs and making $5.50 an hour will feel the hurt. I just hope these people take the time this fall to vote, I think they will this time.

I saw Mr. Gore's global warming presentation on World Link tv and found it point on! He hasn't toured the country the last few years promoting the dangers of global warming to be trendy, politically correct or show that he is the "smartest guy in the room". He did it because its the right thing to do.

I'd like to see him nominated for a Nobel Peace prize. How else does one promote world peace unless its by saving the world from itself?

What's wacko is the people who do not believe the enormous amount of evidence that proves Bush and his crowd did deliberately cause 9/11.