Congratulations, George. You Sure Created One Helluva Mess in Iraq 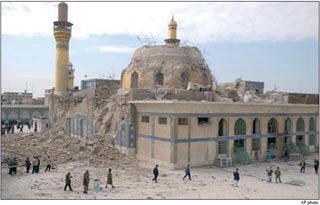 Just when you thought the situation in Iraq could not get any worse, insurgents dressed in paramilitary uniforms entered the Golden Mosque in Samarra, handcuffed guards and set off explosives that blew apart one of the most sacred Shiite shrines. Violence erupted in the streets, as angry Shiite mobs vowed revenge against Sunnis. The country, already as frail as can be, is on the verge of civil war. Furthermore, the Shiite cleric and political leader, Moqtada al-Sadr, the Mahdi militiaman at the center of the U.S.'s most violent battles, appears poised to emerge as the country's most powerful figure. Nice job, George. Keep telling the mothers and fathers of dead soldiers that their sons and daughters have died for a good cause. To the contrary, your ill-conceived and colossally-botched experiment has caused the needless death of tens of thousands of people.

Sadr, the 33-year-old cleric has joined the powerful United Iraqi Alliance (UIA), which won 128 of 275 seats in parliament in Dec 15 polls. His support resulted in the re-nomination of the Dawa party's Ibrahim al-Jaafari as prime minister last week. Sadr also came out strongly against the country's new Constitution and wants an immediate withdrawal of foreign troops.

"I reject this constitution which calls for sectarianism and there is nothing good in this constitution at all," he told al-Jazeera television. He added that the withdrawal of foreign forces "should be the priority of the future Iraqi government."

Sadr's right. Sadly, the U.S. has squandered hundreds of billions of dollars and too many lives naively trying to turn this country into a Democracy. Instead, we'll likely end up with a radical Muslim state and/or a country heavily influenced by "Axis of Evil" Iranian clerics. Either way, the U.S.'s mission, whatever that was, has clearly failed. It's time to be the troops home.
Posted by The Ostroy Report at 7:40 AM

Since I haven't heard this for a while, isn't it funny how everything the anti Iraq war activists said would happen if we invaded Iraq has happened? Remember how we were made to feel like we were anti USA?

Bush finally has done one thing he said he would do: He has united the country against him and his plan to sell our ports to an Arab country. I don't care how great that country is. We can not take the chance with our ports. They have dubious connnections.

What a uniter! Heck of a job, Bushie!

Cathy
Michgan (The state that is going down economically.)

Maybe if we all chant "Heck of a job, Bushie" enough times, he will go the way of Brownie. I will never, for the rest of my life, trust any government, but especially not ours.

As the promise of a beacon of democracy in Iraq dims, and with it, the "domino theory in reverse" of a democratized middle-east becomes even less plausible, one has to wonder how long before Bush apologists change their rhetoric about invading Iraq to promote democracy.

Since I haven't heard this for a while, isn't it funny how everything the anti Iraq war activists said would happen if we invaded Iraq has happened? Remember how we were made to feel like we were anti USA?

Cathy once again you got it right.

You can now throw NEOCONSERVATISM on the junk pile of FAILED PHILOSOPHIES along with Communism, Supply side economics, No Child Left Behind, ect. .

Hey maybe us TURNCOAT TERRORIST SUPPORTERS that warned against this war and it’s consequences while this MORON’s supporters waved the flag and cheered it on were right all along???

As far as I’m concerned no amount of bad news is enough for this administration. I wish nothing, but the worst for this lying Son Of Bitch, his Administration and the idiots that voted for him. You deserve what you get. Just think you clueless red state morons we got another 2 years of your GODLY FUHRER…enjoy!!!

Have you seen those new pro-war TV ads? "Fighting them there so we don't have to fight them here", "Just & Righteous cause", "We really ARE fighting Al Qaida" etc.
Who is paying for these ads? Smart money is - the taxpayer. I think we should be told.

That ain't gonna happen under this Admin. This is from the same guys that spent $250K of taxpayer money to put out Propaganda to push No Child Left Behind. And oh yeah, that $4 Billion a month that goes to fight this CLUSTER in Iraq is not figured into the Budget.

Face it friends, we as taxpayers are gonna get stuck with the bill for this jackass and his failed Administration. The only thing that is good is that the Misery will be spread to all the Red State Idiots as well, but Fox News will tell them it was the Tax and Spend Liberals that did it to them and they will believe it. Oh well, it ain’t a crime to be uninformed and stupid. Just be glad the majority of those overseas Fighting BUSH”S WAR voted for him.


You can write the history now, the only ones that did well under this administration were the Corporations, Big Oil, The Military Industrial complex and the well connected.