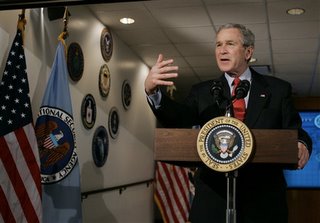 The Bush administration is hiding behind the Constitution in justifying its five- year campaign of warrantless wiretapping of American citizens under the pretense that it's been intercepting phone and email transmissions from individuals with links to terrorist organizations.

"We must be able to quickly detect when someone linked to al-Qaida is communicating with someone inside of America," Bush said last week speaking at the NSA headquarters.

But since 1978, following the corruption of the Nixon administration, this type of eavesdropping has been regulated by the Foreign Intelligence Surveillance Act, known as FISA, to safeguard against abuses of power and violations of the separation of powers doctrine. The purpose of FISA, in the words of the Senate Judiciary Committee, was "to curb the practice by which the executive branch may conduct warrantless electronic surveillance on its own unilateral determination that national security justifies it."

With the Bushies' argument that the president has inherent constitutional authority to conduct warrantless surveillance, the administration is, in effect, claiming that the FISA regulations are unconstitutional. And this debate will go on for while at the Judiciary Committee's hearings which began today.

The real question that begs to be asked is whether Bush & Co's controversial spying is more far-reaching than anyone currently imagines. For example, did the NSA wiretap any Democratic politicians and or staffers? This question must be asked. And it needs to be asked directly, under-oath, to Attorney General Alberto Gonzales, former AG John Ashcroft, and all other Bush administration officials that have been and/or are currently party to this ongoing wiretapping campaign.

We must fully understand the breath of this operation, and punish to the fullest extent of the law all those who are indirectly and directly involved, including Gonzales, Cheney and perhaps the president himself. Let's remember what got Clinton impeached. I think it's safe to say Bush should face a similar fate if he is found guilty of breaking the law by flagrantly violating FISA restrictions in spying illegally on innocent U.S. citizens, or worse, spying on Democratic politicians for purely political purposes.
Posted by The Ostroy Report at 2:52 PM

You can bet they have and that is why they are fighting so hard.

How about Kerry during the last campaign?

The real question is; who has the guts to stand and be counted against these neo-fascists? I don't think any in the House or Senate do. Time for a real change.

Hell none of this matters, these fuckers won't even be under oath, so they can lie all day long and it just won't matter.

Arlen Specter... get some balls... you almost seem to have them.

Leahy was more interested in 1st Class Mail being tampered with around the time the Weapons grade Anthrax was sent to the democratic leaders.
Alberto would not commit to having opened the mailed as part as their spy program.

I assume that you think your question was important because of the potential to blackmail Dem pols. Some of them will be unfaithful to spouses, or have sexual quirks, or step a little over the ethics line (and some may even be downright crooks). If Dumbya is lucky he'll be able to blackmail a few of the Dems who currently vote against him to vote for him (and if they refuse to co-operate he'll out them and hope that turns the voters against them in the elections). With that advantage, a few bills that would have failed by a narrow margin might succeed, saving him having to use the "signing interpretation" trick that makes him look bad. And on the ones that would have passed anyway, he might get a handful of Dems so he could spin the bill as having bipartisan support. It looks much better if he can say "I disagree with this legislation, but that is the bipartisan will of Congress, so I must enforce it" rather than "I'm a fascist dictator and I'm going to ignore Congress." Even fascist dictators have to worry about their world image until they have everything locked down.

All that is bad enough. But the GOP pols tend to be more likely to be maritally unfaithful, to have bizarre sexual perversions, and to be downright crooks. Which makes them eminently blackmailable. Which is important now some centrists are unhappy with the Chimp's extremism and even those who back him to the hilt are worried that his unpopularity will rub off on them. So Bush has reason to wiretap the Gop pols too. If he doesn't, he's going to lose more and more votes as time goes on.

And even worse. With enough blackmailed congresscritters in both houses, and in State houses, he can get the Constitution amended any way he wants. Goodbye XXIInd Amendment, hello President-for-life Dubya the first.

Cheney is not going to let legislation stop them wiretapping. Torquemada Gonzales and John Yoo will once again be overdosed with LSD so they can come up with bizarre, other-worldly legal constructions. Signing statements will be used as a last resort. And if Congress bans signing statements, Bush will sign that into law with a signing statement saying he'll ignore it. The only way to stop this is to impeach. And that has to be done now before Bush and Cheney have the goods on too many legislators and can block impeachment.

But it's not all doom and gloom. Because if we start asking if Bush has wiretapped any GOP pols, some of the brighter ones will work all this out for themselves (and tell the dumber ones). None of them will want to be under Dubya's thumb. The more ethical ones will resent the attack on their constitutional powers. The corrupt ones will be scared (rightly so) that Bush and Cheney will want a big cut of whatever bribes they're taking from big corporations.

Small as it is in comparison to Bush and Cheney's other crimes (all the war crimes, for starters), this is the only one that will worry GOP pols badly enough to impeach these bastards.

we have royalty,imean rogues in charge of u.s.goverment.they scorn the law and scoff at the constitution.We must insist that no one is above the law KING GEORGE AND ALL HIS MERRY THIEVES ROB THE MIDDLE CLASS AND POOR TO KEEP TAX CUTS IN PLACE FOR SUPER RICH AND LARGE CORPS.WHILE PAYING MEDIA WITH TAX PAYERS MONEY TO KEEP IT COVERED UP.THE REPUGS. IN BOTH HOUSES SUPPORT THIS CORRUPTION BECAUSE PEOPLE WILL KEEP VOTING FOR THIEVES AND CROOKS, WHICH SHOULD BE IN JAIL NOT CONGRESS.