Hackett, Carter and Ports, Oh My 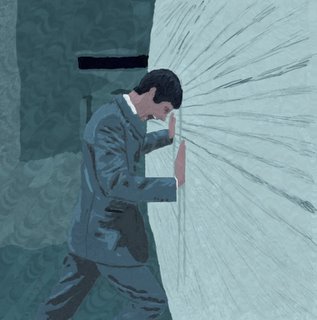 Several events have gotten me riled these past few days. To begin with, I'm flabbergasted by Fmr. President Jimmy Carter's comments about Israel cutting off financial aid/payments to the Palestinians now that the terrorist organization Hamas is running the show. Israel has stopping the transfer of hundreds of millions of dollars in tax money, branding the Palestinian government a "terrorist authority."

One question, Mr. Carter: would you ever in a million years go on CNN and suggest that the United States should continue sending funds to Iraq, Afghanistan or any other country that would be run by Al Qaeda? Until you walk in the Israelis' shoes, which have for twenty years stepped over the blood of innocent Israeli children brutally spilled at the hands of Hamas, your comments will be considered misguided, naive and highly insensitive.

My next beef is with the Bush administration's brilliant idea to authorize the sale of operations at six major U.S. ports to the United Arab Emirates. Yes, you read that correctly. A state-owned UAE company will be in charge of ensuring Americans' security at ports in New York, New Jersey, Baltimore, New Orleans, Miami and Philadelphia. The ports were previously controlled by London-based Peninsular and Oriental Steam Navigation Company, which was bought last week by the Dubai Ports World. The Bushies claim they've properly vetted the deal and have required strict adherence to several security conditions and measures.

But the decision has caused an uproar in Washington, attracting criticism from leading Republicans like Sen. Lindsay Graham (SC), who said the decision to give the UAE control of the port operations was "unbelievably tone deaf".

I ask, how on earth can the UAE weed out the honest laborers from the suicide bombers who might infiltrate the company, pose as workers and enter the U.S. for the sole purpose of wreaking havoc? (the UAE, mind you, was home to two of the nineteen 9/11 hijackers). Until this question is answered without a shadow of a doubt, this was surely a bone-headed decision indeed.

Lastly, this brings us to the decision by Paul Hackett to drop out of the Senate race in Ohio. Not because this war veteran lost his courage to wage battle, but because the namby-pamby Democratic leadership--including Sen. Chuck Schumer(NY) and Sen. Harry Reid (NV)--pushed him to do so to make way for Congressman Sherrod Brown, a longtime member of Congress, to take on Senator Mike DeWine, the Republican incumbent. According to Hackett they pressured his key supporters to stop aiding his candidacy. It came down to two things: money and balls. Brown has about $2.5-million in his campaign war chest, about ten times that of Hackett. Hackett, you'll recall, came within a nose hair of winning the House seat last year in his race against Jean Schmidt (yes, the "Murtha's a coward" Jean Schmidt) in the 2nd district, the most heavily Republican district in the state. The Dem's were also concerned with Hackett's outspokenness over the war, Bush and the right-wing in general.

Finally, we get a guy who speaks the truth and has a clear message. Someone who speaks without reservation and is not an apologist like Reid. New blood that can fight the battle with the GOP the way it needs to be fought, not operate business as usual. We need more candidates like Hackett, not less. And when push came to shove, the Dem's lost their balls and went the conventional route. Hackett was railroaded by his own party. It's one thing to get your ass kicked by the other side. It's another when it's by one of your own. Let's hope candidates like Paul Hackett remain motivated to stay in politics and help lead the battle. We all know the current Democratic leadership couldn't fight its way out of a paper bag.
Posted by The Ostroy Report at 7:14 AM

No offense but, the Dems went the money route which is the only way to win elections in this once great country. Am I happy about it? No. Is it the reality of the game? Yes. Do the Repubs always have tons of money to fight us? Yes. Case closed.

Jimmy Carter: "It would not violate any political principles to at least give the Palestinians their own money; let humanitarian assistance continue through UN and private agencies; encourage Russia, Egypt and other nations to exert maximum influence on Hamas to moderate its negative policies; and support President Abbas in his efforts to ease tension, avoid violence and explore steps toward a lasting peace."

The administration is defending its controversial decision by saying that the deal was vetted by many agencies before being approved. What they don't say is who represented the agencies; knowledgeable career employees or incompetent, partisan hacks like Brown and Chertoff.

Sorry Cathy, but I have to differ with you big time on this. First, would you feel the same way if instead of Israel, Palestinians and Hamas it were Afghanistan, the U.S. and Al Qaeda/bin Laden?

Next, just because a candidate has the most money doesn't necessarily make him/her the best candidate, or the one with the best shot of winning. Can you say Howard Dean?
If our political system will continue to be all about money, and only money, then we are in for an awfully long haul with the same old retreads. We need to create a government-funded capaign finance system whereby everyone's treated equally; where new blood can have a shot at office, not just the rich and the insiders.
Andy

I agree with you on the ports and Hackett, but not on Carter. Both of these parties have terrorized each other from the beginning. One mans terrorist is another mans freedom fighter. There's enough blame to go around.

Sorry Tom, you are dead wrong buddy. Israel has NEVER, ever gone on the offensive against the Palestinians, especially to vicously kill innocent men, women and children with horrific acts of terrorism and suicide bombings. All wars, military actions etc have been defensive; spawned by hostile acts against them. Further, it is Israel who has made ALL of the concessions and been the US's true partner in this road map peace process. What have the Palestinians done? They vote into power a terror organization who publicly states as its goal the absolute destruction of Israel. To the contray, Israel recognizes the palestinians right to a homeland and has worked with the US towards that end. Tom, you are way way of base here pal.

I agree with President Carter. The proof that what Israel is doing is precipitous of a larger disaster is by looking at what has happened in Afghanistan and Iraq. Poverty and lack of self determination expounded with being cut off from international trade has fomented more anti Israeli pro islamasist views in the absence of any outside influence. Those radical elements in Hamas gain the upper hand, as they are able to shift the blame to Israel easier with Israel's manipulations. Take away the due tax payments, the outside trade (which should be independat of Israel) and create more "roadblocks" figuatively and in reality, and you set up conditions as existed in Iraq. Palestine is s a democracy. There should be respect for their choice.
With respect comes responsibility. If we respect the choice Palestinians have made, I believe they will take responsibility for their actions. We are not talking theocracy, and tribal law like pre 2002 Afghanistan.

Israel still has political parties based on the elimination of a Palestinian state and Israeli expansion to the east. Why not speak for their disbandment in Israel as well and a cut off support to Israel while those extremists are a viable party?

Sorry anonymous. You are wrong. Israel was formed on what would be termed today as terrorism. Trouble started at the end of the 19th century with organized groups dedicated to Zionism. The Stern Gang and many others fomented the anti-muslim (not anti-Arab, Palestinians are semites like the native Jewish inhabitents of the region, not Arabs)attitudes in the 20ith century before the creation of Israel. It has been recorded that these groups, supported by both NAZI and British governments used bombings and deception while shifting the blame to the Muslims to instigate confrontation. Jews and Muslims lived in relative peace and cooperation for centuries previously.
Israel has been caught using this technique since their foundation. "By way of deception thou shalt do war."~ Mossad motto as told by defector Victor Ostrovsky. I should also mention who most of our most recent spys worked for.

Just the fact that you do not sign your name should tell people not to take you seriously.

Allen, I'd like to respond to your comments. First, what could be more damning to Israeli than Hamas being voted into power? Just because the Palestinian people fail to realize what a setback their actions have caused in the greater peace process does not mean that Israel should be forced to recognize and deal with a violent enemy hellbent on its destruction. "Respect for their choice?" Three+ decades of Fatah/Arafat rule has bankrupted the Palestinians. And now they choose a violent terror group to lead them out of this abyss. Wrong decision. As for political parties, you are correct. There are some very radical ones that exist in Israel, but that only proves that Israel is a true Democracy. But most important is that these fringe groups do not run the country! That's a huge distinction that appears lost on you.

Look, I'll be the first to admit that not everything Israel does is correct or with good judgement. But really, it's quite an enormous stretch to put them in the same category as Hamas. As you said to Anonymous, you cannot be expected to be taken seriously when you do that.

It is not Israel's money and Hamas won the election. Those are the facts. Carter is right. To proceed criminally will do nothing to help the cause of peace.

With all due respect, Israel is just as much to blame as Palestine. But because our corporate-owned media heavily favours Israel over Palestine, Americans do not get the full picture.

Iam not defending the Palestinians methods or means just as i do not Israel's; But perspective is needed.

Herein weigh the differences between Israel & Palestine: Israel's advantage is having a modern army with an up-to-date, huge modern weaponry cache, including tanks, fighter airplanes etc... In contrast Palestinian civilians fight with AK-47's, sticks, rocks and homemade bombs. Palestinian deaths far outweigh in numbers those of Israelis. They are called terrorists, but they are defending their homes and land.

Having said that, let's frame the context in a different way from a different view point and moreover, let's by-pass the blame game.

Take a moment to think about:

What drives a person to become a suicide bomber. What reason could someone possibly have that would make them resort to such drastic measures?

Real or Imagined could it be that person believes he/she has no future, and has lost hope.

Both Israel and Palestine have failed to reach an agreement. There are ALWAYS 2 sides and more to every situation ... It takes two to tango!

FYI: Hamas for years has been educating, feeding and clothing Palestinians. The way of life in the Middle East is so far removed from American's experience that it is difficult to understand.