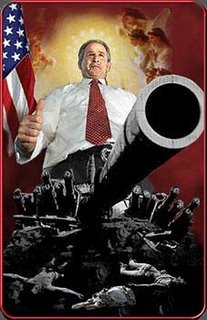 "We removed Saddam Hussein from power because he was a threat to our security. He had pursued and used weapons of mass destruction. He sponsored terrorists. He ordered his military to shoot at American and British pilots patrolling the "no-fly" zones. He invaded his neighbors. He fought a war against the United States and a broad coalition. He had declared that the United States of America was his enemy."

If you're thinking this is 2003-era Bush arguing his case for war, think again. This was the president on Wednesday in his address from the Woodrow Wilson International Center for Scholars in Washington. As Yogi Berra used to say, "it's Deja Vu all over again."

How can this president stand before the American people with any shred of integrity and self-respect and hold firm on his 2002/03 war justifications, all of which have been proven either unfounded or outdated. The coalition forces (I'm being kind here) found no WMD. There's been not one iota of evidence linking Saddam and Iraq to Al Qaeda or any other terrorist organization. He invaded Kuwait 16 years ago. He used chemical weapons against the Kurds in 1988. He was essentially neutered by the U.S. and the U.N. in the 90's and posed no direct credible threat to America's security. Mere facts, you say? Never stopped the Bushies before, and probably never will. The political posse that promised "to restore honesty and integrity to the White House" continues to operate instead as the most deceptive and corrupt in modern history.

But the Bush lies and deception hasn't worked in some time. In fact, Americans are not only wise to the misrepresentations, they're quite fed up. This week's CNN/USA Today/Gallup poll shows that 58% of Americans "said they do not believe President Bush has a plan that will achieve victory in Iraq." And only 42% approve of the president's overall performance. Furthermore, a recent ABC/Washington Post poll found 58% believe the Bushies intentionally misled the American public in order to justify the war. So, all the spinning just makes the Busheviks appear even more underhanded. Let's hope Americans take out their frustration and mistrust next November.
Posted by The Ostroy Report at 10:54 PM

I can't believe how Bush could stand before the people and repeat the same old worn out lies of the past. I too hope that the voters will remember their disgust next November. We must win seats that are up for grabs since many seats are safe due to district lines. The only way to stop them (Bush and the radial right wing) is to have balance and oversite in our government.

Then again the Repubs could just cheat as seems to be their way.

The People need to put together legislation to control these b@st@rds. Let Us push things like term-limits... I can't even finish my thoughts.. this stuff just pisses me off.

Now we find out that Bush authorized the NSA to secretly spy on American citizens.

Rest assured my friends that there probably is an extensive Dossier on all that post to this site and vote something other than Republican.

THESE EVIL BASTARDS MUST BE STOPPED FOR THE GOOD OF THE NATION!!!!