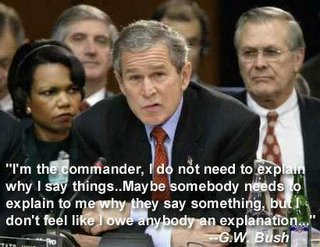 Back in December of 1998, a highly partisan U.S. House of Representatives voted to impeach President Bill Clinton, making him just the second U.S. president in history to be impeached since Andrew Johnson in 1868 following the Civil War. Clinton's offense? Lying under oath about his unimpressive high-school-quality sexual dalliances with intern Monica Lewinsky. Pretty tame stuff, and not quite a threat to anyone or anything except a flimsy red dress and a Rhodes Scholar's dignity.

But what about President George W. Bush? Surely, as compared to Clinton, not only should he face a similar political fate for his war crimes and law violations here at home, but he should be thrown in an 8 x 10 jail cell and be forced to listen to an endless loop of Howard Dean's 2004 campaign speeches.

Bush surely is deserving of impeachment. Here's a partial list of what should be ample ammunition for the House and Senate to serve justice on one of the most corrupt, tyrannical and treasonous presidents in history:

1. Falsifying intelligence and providing false information to Congress to unjustly and illegally invade Iraq, a sovereign nation.
2. Lying about Niger/Iraq uranium connection in 2003 State of the Union speech.
3. Diverting money appropriated by Congress for Afghanistan to planning the Iraq war.
4. Authorizing the use of taxpayer funds to pay for war-propaganda campaign in Iraq.
5. Authorizing of torture and Geneva Convention violations at Abu Ghraib and Guantanamo.
6. Inhumane, illegal treatment of detainees in the "War on Terror"
7. Leaking a covert CIA agent's identity as retaliation against a political enemy.
8. Illegally spying on Americans within the United States.
9. Illegal use of taxpayer funds to pay for Armstrong Anderson/No Child Left behind propaganda.

Let's hope the Democrats win back the House next November, which would enable them to commence impeachment hearings. Until then, perhaps some Rove-like covert liberal operative should just arrange to have a hooker sent into the Oval Office so we can catch the prez with his proverbial pants down. Maybe that'll motivate this Republican leadership to go after Bush, since the current laundry list of impeachable offenses doesn't seem to be enough for them.
Posted by The Ostroy Report at 7:00 PM

You are truly "RIGHT ON".

Oh where, oh where, is All I Can Stands?

Thanks for the list. Let's hope this list or an "official" one gets into the hands of the people who will decide on impeachment. It is now time to put an end to this awful chapter of american history. Enough is enough!

I would like to add "criminal negligence in response to the aftermath of Hurricane Katrina" to the list.

Have you people ever heard or seen what most of the leaders of the Democratic Party were saying about WMD’s in Iraq before Bush ever took office. What a brilliant guy he must have been to manipulate intelligence even before becoming president. Just how long would it take to crank up an anthrax operation?

Jazzy cat,
This lying jackass and his cohort of liars wanted this war from the outset. Just look at the interviews and writings of the people that were with this Bonehead when he stole the 2000 election. He wanted it and he got it and now don't you think he should pay the price for screwing up?

Out here in the REAL world people pay the price for screwing up, but not in Bush’s World there you get a medal and a promotion.

The only way were gonna send this inarticulate bible banger the way of Nixon is to get some of his accomplices out of congress.

Have no fear just let Bush and the GOP be themselves and even the uninformed Slack jaws will vote these clowns out in 06...Rove or No Rove.


“Just how long would it take to crank up an anthrax operation?”

Probably the same amount of time it took to circumvent and break the law to spy on American citizens.

anonymous, you miss me? how sweet. sorry, no time these days to 'troll' as you folks call it. besides, i'm happy with how things are going, which so far is in line with my predictions. next year is going to be so fun.

Hey Spinachboy welcome back..it's not the same without someone spewing the Spin based and fact less GOP Party line.

Oh yeah.. how is it gonna be fun?? Your party is no longer following your fearless leader lock step and he has had a few defeats in congress. Also, he's gonna take it for this spying scandal...wait and see.

The Neo Fascist Christian movement took it on the chin with the set back to Intelligent Design this week. Even the NO # 3 republican i.e. Santorum a noted Bible banger and hypocrite is backing away from the religious right now. Also, just wait for Jack Abramoff to cut a deal and the indictments on your GODLY GOP will begin in earnest next year. And Iraq is on the brink of Religious Civil War….

So if anyone is gonna have a good time next year it sure won’t be anybody in GOD’S Party i.e. the GOP.

Enjoy and Merry Xmas!!! May Santa bring you much Spinach and may Olive Oil finally say YES.

I thought twas a blue dress.

I urge you and your readers to take a few minutes to examine:

It's a list of the 25 most recent comments made by real Americans participating in an online poll/letter-writing campaign concerning the impeachment charges recently filed against Vice President Cheney, which are now being evaluated by the House Judiciary Committee. Comments can be sent to elected representatives and local newspapers at your option. The participation page is at:

Since this campaign began, three members of Congress have signed on as co-sponsors, in part due to hearing from their constituents. Make your voice heard, and let others know!