Al Gore at a Brokered Convention? 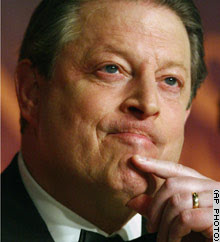 Is there hope for an Al Gore presidency yet? The closer the Hillary Clinton/Barack Obama race gets, the more plausible the scenario (ok, at this point it's still the fantasy scenario) that has the former vice-president being drafted at the August Democratic convention, finding himself on a second ballot for the nomination. Crazy, you say? Not really. I wrote about this possibility a while back, and I'm not yet convinced it's that improbable a scenario. In fact, Newsweek's Eleanor Clift wrote about the same thing on Friday. The last time the Dems had a brokered convention was 1952, when President Harry Truman allegedly hand-picked Illinois Gov. Adlai Stevenson to be the party's nominee.

To be sure, it's those pesky little 'super-delegates' who may hold all the cards. Many remain uncommitted, and even those pledged can switch allegiances at convention time. Just who are these folks who wield such ultimate power? There are 795 of them on the Democratic side, not counting those in Florida and Michigan (the states whose delegates were unseated by the party over primary-scheduling disputes). They comprise former U.S. presidents, vice-presidents, DNC members, governors, snators, US representatives and other party officials. The system was hatched in frustrated response to the 1972 nomination of the largely-unpopular George McGovern and inexperienced Jimmy Carter in 1976. Their effect was first felt in 1984 when they pulled away from Gary Hart to pledge support to Walter Mondale, the more electible nominee. These virtual kingmakers exist as a safety-valve against ideologically extreme or inexperienced candidates. Their mandate is to ensure that the party puts forth its most electible candidate in the general election.

Now jump to 2008. Here's were it gets interesting: Clinton needs 86% of the remaining 1237 regular, pledged delegates--starting Tuesday in Hawaii and Wisconsin--to win the nomination outright without any superdelegates. In turn, Obama needs 80%. At the rate they're going, they could feasibly split this balance and each end up with around 1900 or so delegates overall, well short of the 2025 needed to win the nomination.

Let's suppose the Democrats head to Denver in late August and Obama and Clinton are deadlocked. The party's power-brokers panic, fearing neither candidate has a clear majority of popular support and therefore can't beat the GOP's John McCain in November. They turn to Gore, a proven entity who would unite the party and perhaps enlist Obama or Clinton as his running-mate, creating an unbeatable ticket in the process. For Gore to get on the ballot, according to Clift, "All it would take is a delegate perhaps from Tennessee, his home state, to raise a point of order, and with backing from five other state delegations, Gore's name could be put in play as a prospective nominee."

Now there's been much said about whether or not it bodes well for our Democracy to have such a small group of political kingpins potentially deciding the outcome of an election. But keep in mind that super-delegates are not some renegade band of self-serving mavericks out to undermine the Democratic party. To the contrary, they are the party's most accomplished, most respected, most vested members who truly have only one mission: to ensure that the party sends is best candidate into November so that it can win.
Posted by The Ostroy Report at 8:24 AM

As much as I love Al Gore he wont do it. He doesn't want to be president. Also, this is the election of change and people are pretty wedded to the idea of either a first black man or first woman as president so might not jump on the Gore bandwagon the way I would. The last I heard, Gore had a 12% poll rating in the presidential race and that was before the Clinton and Obama campaigns took off.

The last thing the Dems need is a brokered convention or a nominee picked by the super delegates. If the Dem nominee is not one picked by the voters and all of the primary results are overturned the Dems lose the right to tar Repubs for stealing the 2000 election.

What the Democrats and the country needs is to have a Democrat as President. We simply cannot endure another Republican administration with their agenda including the next Supreme Court apointees. Whatever it takes. And, don't forget the super delegates process is legal. We need Al Gore. The race between a white woman and a black man is dividing us seriously. The blacks are being racists by voting for the black candidate because he's black, and older women are rallying behind Hillary because she is a woman. And white males will vote for McCain because he's a white man. And, really what kind of "change" does gender or race create? Obama is not going to be able to "change" the Republicans into cooperating with him. He will have to "cave" in order to get by-partisan agreement. What is happening in our party is a nightmare. If not Gore, I would almost wish for Bloomberg. Now we're having a split over the super delegates and what they're allowed to do. This cannot end well for the Democratic Party no matter how it's worked out. Gore, Please, Help.

Anytime Al Gore was factored in as a serious candidate in polling, he rated top scores above all the exissting candidates.

Time for
a COOL
change
GORE!!!

That would be excellent if it were to happen (I doubt it.)

I'm tired of the cult like support for Obama. He has a past that we need to know about prior to him getting the nomination. Yelling by Obama supporters to those who bring this up that they are racist, only shows how little Obama folks know about politics. Obama needs to be vetted so we can be ready for whatever the Republicans bring up.

Wake up folks! So many Obama supporters sound like folks without a clue as to how the game of politics is played. How can they forget how nasty, dirty and full of lies the Republicans can be to win at any cost. Wake up.

Interesting idea, but it seems pretty unlikely to happen. Obama and Clinton are generating a pretty good amount of enthusiasm from their supporters (especially Obama). The current atmosphere and the record numbers voting in the primaries probably isn't the scenario that would cause Gore to jump in. Unless something happens in the next couple of months to dampen the Democrats enthusiasm (some surprise dirt on Obama by Hillary's campaign shortly before Texas and Ohio might do the trick), Gore will continue to be a statesman, observing from above the fray.

As much as I would like Al Gore to be president for 6 terms, the idea that anyone but, 'the people who voted', can elect who is going to be the nominee, is absurd. Why not just skip the debates, the visits to all of the states by the candidates, the tv and other media appearances, and just spend one day having the super delegates vote for who they want to be president? Skip the voting in the primaries. Skip democracy. The concept of super anything is anti-American.

Isn't that what we all want?

I would really appreciate it if an Obama supporter would tell me what the change is he's preaching and how he will bring it about. Is he going to change the way the Senate and House vote? Is he going to abolish lobbying? Is he going to forbid filibustering? I am really serious. I haven't made up my mind yet because I don't get what he means. Please tell me, somebody.

I'm too old and too poor to be idealistic. I don't have parents who are supporting me. My five month CD earning 5 percent interest five months ago has just rolled over to earn 2 (TWO) percent for the next five months. I hope the super delegates choose the one who will put survival money in my pocket.

Andy, i cant believe you are STILL hoping this fraud will run. All the time and energy you put into Al Gore running you could actually spend researching how much of a fraud he is.

andy, why do you run from the truth? you never address my commenst about Gore the fraud---who wins Oscars for a movie about something that isnt even caused by man. They are going to TAX us for global warming--it's in the works now. Ron Paul is the ONLY one who could make this country great---and that is exactly why he has been censored and blacked out by the media. He's a threat to the estblishment and to big government. Whoever gets to the white house-----MORE OF THE SAME.

I'm part of the older "demographic" of women for Hillary Clinton...and conversation after conversation with women (who are by the way academics -- the group that gives the most to the democrats) ends with someone saying ...what if there was a brokered convention, what about Al Gore...and the response is always...wouldn't that be great...Gore is what we need...to bring us together ...and to refocus us on the real issues...I hope he'd do it!

would just like to point out a few things...

1. The Democratic Party is MY Party, I support her financially and I am registered to vote in her Primaries and Caucuses. I am a dues paying member of a Democratic Club, which is the building block of our Party, MY Party.

3. Because this is our Party, MY Party, we make the rules. Not the Congress, not even the Constitution. When a National Democratic Convention is not in Session, the Democratic National Committee, chaired by Gov. Howard Dean and composed of Democrats elected by other Democrats, serves as the governing body. They make the rules. Period.

4. If the Democrats, through the DNC or by vote of the Convention, decide that all Democratic Primary voters must wear pink hats when voting or not be allowed to vote in our Party's, MY Party's, Primary or Caucus, well... You need to go get your pink hat or stay home... We get to make the rules; no one has a Constitutional Right to cast a ballot in any of our Primaries of Caucuses, unless they follow OUR rules.

5. Because our Party's, MY Party's, Primaries and Caucuses are so open it was theoretically possible for someone who does not stand for the principles or even the best interests of our Party, MY Party, to acquire the delegates to become our nominee. Thus in a nightmare scenario a Zell Miller who is supported by Republicans who vote in our, MY, Primaries in large numbers could become the standard bearer of a Party he despises... This is why we have the Superdelegates, the elected Democratic officials, our stakeholders.

So I don't want to hear anymore about what the Democrats HAVE to do... We will do as we, the Democrats convened in Denver for our National Convention, choose to do, period. We will do this without reference to any outside influences; this is our, MY, right as a Democratic Convention Delegate or Alternate.

If you would like to have some influence in this process beyond your invited and welcomed vote in our, MY, Primary, then register as a real Democrat and join one of the thousands of local Clubs that are our organizing units. Or start your own Party, but get off this tellin' me, or any other Democrat, what we must or must not do.