Help This Man Find a Job

This comes to us from our friend Jenny in upstate New York.... 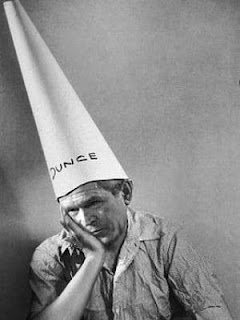 Law Enforcement:
I was arrested in Kennebunkport, Maine, in 1976 for driving under the
influence of alcohol. I pled guilty, paid a fine, and had my driver's
license suspended for 30 days. My Texas driving record has been
"lost"
and is not available.
Military:
I joined the Texas Air National Guard and went AWOL. I refused to
take a drug test or answer any questions about my drug use. By
joining the Texas Air National Guard, I was able to avoid combat duty
in Vietnam .

College: I graduated from Yale University with a low C average. I was a
cheerleader.

I ran for U.S. Congress and lost. I began my career in the oil
business in Midland, Texas in 1975. I bought an oil company, but
couldn't find any oil in Texas. The company went bankrupt shortly
after I sold all my stock.
I bought the Texas Rangers baseball team in a sweetheart deal that
took land using taxpayer money.

With the help of my father and our friends in the oil industry
(including Enron CEO, Ken Lay), I was elected governor of Texas.

ACCOMPLISHMENTS AS GOVERNOR OF TEXAS:

I changed Texas pollution laws to favor power and oil companies,
making Texas the most polluted state in the Union. During my tenure,
Houston replaced Los Angeles as the most smog-ridden city in America.

I cut taxes and bankrupted the Texas treasury to the tune of billions
in borrowed money.

I set the record for the most executions by any governor in American
history.

With the help of my brother, the governor of Florida, and my father's
appointments to the Supreme Court, I became President of the United
States, after losing by over 500,000 votes.

I am the first President in U.S. history to enter office with a
criminal record.

I invaded and occupied two countries at a continuing cost of over one
billion dollars per week.

I spent the U.S surplus and effectively bankrupted the U.S. Treasury.

I shattered the record for the largest annual deficit in U.S.
history.

I set an economic record for most private bankruptcies filed in any
12-month period.

I set the all-time record for most foreclosures in a 12-month period.

I set the all-time record for the biggest drop in the history of the
U.S.
stock market. In my first year in office, over 2 million Americans
lost their jobs and that trend continues.

I'm proud that the members of my cabinet are the richest of any
administration in U.S. history. My "poorest millionaire,"
Condoleezza Rice,
has a Chevron oil tanker named after her.

I set the record for most campaign fund-raising trips by a U.S.
President.

I am the all- time U.S. and world record holder for receiving the
most corporate campaign donations.

My largest lifetime campaign contributor, and one of my best friends,
Kenneth Lay, presided over the largest corporate bankruptcy fraud in
U.S. history, Enron.

My political party used Enron private jets and corporate attorneys to
assure my success with the U.S. Supreme Court during my election
decision.

I have protected my friends at Enron and Halliburton against
investigation or prosecution. More time and money was spent
investigating the Monica Lewinsky affair than has been spent
investigating one of the biggest corporate rip-offs in history. I
presided over the biggest energy crisis in U.S. history and refused
to intervene when corruption involving the oil industry was revealed.

I presided over the highest gasoline prices in U.S. history.

I changed the U.S. policy to allow convicted criminals to be awarded
government contracts.

I appointed more convicted criminals to my administration than any
President in U.S. history.

I created the Ministry of Homeland Security, the largest bureaucracy
in the history of the United States Government.

I am the first President in U.S. history to have the United Nations
remove the U.S. from the Human Rights Commission.

I withdrew the U.S. from the World Court of Law.

I refused to allow inspector's access to U.S. "prisoners of war"
detainees
and thereby have refused to abide by the Geneva Convention.

I am the first President in history to refuse United Nations election
inspectors (during the 2002 US election).

I set the record for fewest numbers of press conferences of any
President since the advent of television.

I set the all-time record for most days on vacation in any one- year
period.
After taking off the entire month of August, I presided over the
worst security failure in U.S. history.

I garnered the most sympathy ever for the U.S. after the World Trade
Center attacks and less than a year later made the U.S. the most
hated country in the world, the largest failure of diplomacy in world
history.

I have set the all-time record for most people worldwide to
simultaneously protest me in public venues (15 million people),
shattering the record for protests against any person in the history
of mankind.
I am the first President in U.S. history to order an unprovoked,
pre-emptive attack and the military occupation of a sovereign nation.
I did so against the will of the United Nations, the majority of U.S.
Citizens and the world community.

I have cut health care benefits for war veterans and support a cut in
duty benefits for active duty troops and their families in wartime.

In my State of the Union Address, I lied about our reasons for
attacking Iraq and then blamed the lies on our British friends.

I am the first President in history to have a majority of Europeans
(71%) view my presidency as the biggest threat to world peace and
security.

I am supporting development of a nuclear "Tactical Bunker Buster,"
a WMD.

I have so far failed to fulfill my pledge to bring Osama Bin Laden to
justice.

All records of my tenure as governor of Texas are now in my father's
library, sealed and unavailable for public view.

All records of SEC investigations into my insider trading and my
bankrupt companies are sealed in secrecy and unavailable for public
view.

All records or minutes from meetings that I, or my Vice-President,
attended regarding public energy policy are sealed in secrecy and
unavailable for public review. I specified that my sealed documents
will not be available for 50 years.


On another note, we could use your help at The The Adrienne Shelly Foundation. We are a tax-exempt, non-profit organization dedicated in my wife's honor to help carry out her spirit and passion, with the goal of assisting women filmmakers. Adrienne was brutally killed in NYC on November 1, 2006. Through the Foundation, her commitment to filmmaking lives on. We've established scholarships, grants, finishing funds and living stipends at NYU's Tisch School of the Arts/Kanbar Institute of Film; Columbia University; American Film Institute; Women in Film; the Independent Feature Project; the Nantucket Film Festival; and the Sundance Institute. Your generous contribution will go a long way towards helping us achieve this very important mission. Thank you.
Posted by The Ostroy Report at 8:59 AM

He's rich. He won't need a job. We just want Bush/Cheney to be held responsible for their crimes and please just go away.

As frigtening as it is, Bush still has supporters in this country -- many of them hate McCain, although McCain went over to mostly agreeing with Bush. Not only that, Bush is still getting his way with this Congress. They have caved and allowed him to make the mistakes he makes. He can still do a lot of destruction while he still has this job.

I Love this resume. Good job Jenny!
This is simply the result of electing oil millionaires to run the country and allowing Baptist Evangelical preachers tell their parishioners who to vote for.
Oh and by the way does Ted Haggard still get to tell Bush what to do every Monday morning as part of the deal bush made for the evangelical vote?

It didn't stop you from voting for him, though, did it ?

Ted Kennedy killed Mary Joe Kopechne, but that doesn't stop you from supporting him, does it?

The Clintons were involved in the murder of Vince Foster, but that doesn't stop her from being the potential Democrat candidate for President in 2008, does it?

unless i missed it---you forgot that Bush also has borrowed more foreign money than the first 42 presidents COMBINED.

Well as long as we are getting to the Clinton's and Ted Kennedy killing people (as you have been brain washed to believe) what about Laura Bush running a stop sign and killing the boyfriend whom she had just broken up with and her traffic ticket just disappeared. Oh, you what? You don't believe that.

Laura Bush's problems miss the point. She is not an elected official like Ted Kennedy, John Kerry, Bill Clinton, or George Bush.

4:29 Doesn't let the facts get in the way of his beliefs. No wonder he likes Bush. And Hillary wasn't an elected officer either when the likes of Anon 4:29 bashed her. But, hey, Republicans will be Republicans.

9-11 was not a security failure. Theres no way in HELL NORAD "failed" to not get at least ONE plane that day. It was allowed to happen or orchestrated by black-ops to get American support for pre-emptive attacks on a country that did nothing to us. Im not saying Bush was involved in 9-11----he couldnt manage a Taco Bell. Im saying he knew something---thats why he did NOTHING on that day until AFTER it was clear the last plane completed its task (the one shot down in PA). Look who has gained the most from 9-11----the Bush administration. They got their wars, they got their increases in military spending. They use and exploit fear on the American people whenever they want something from Congress---like more military funds. 9-11 did nothing for any terrorist. It did EVERYTHING for this administration.

My heart is with you today, Andy.